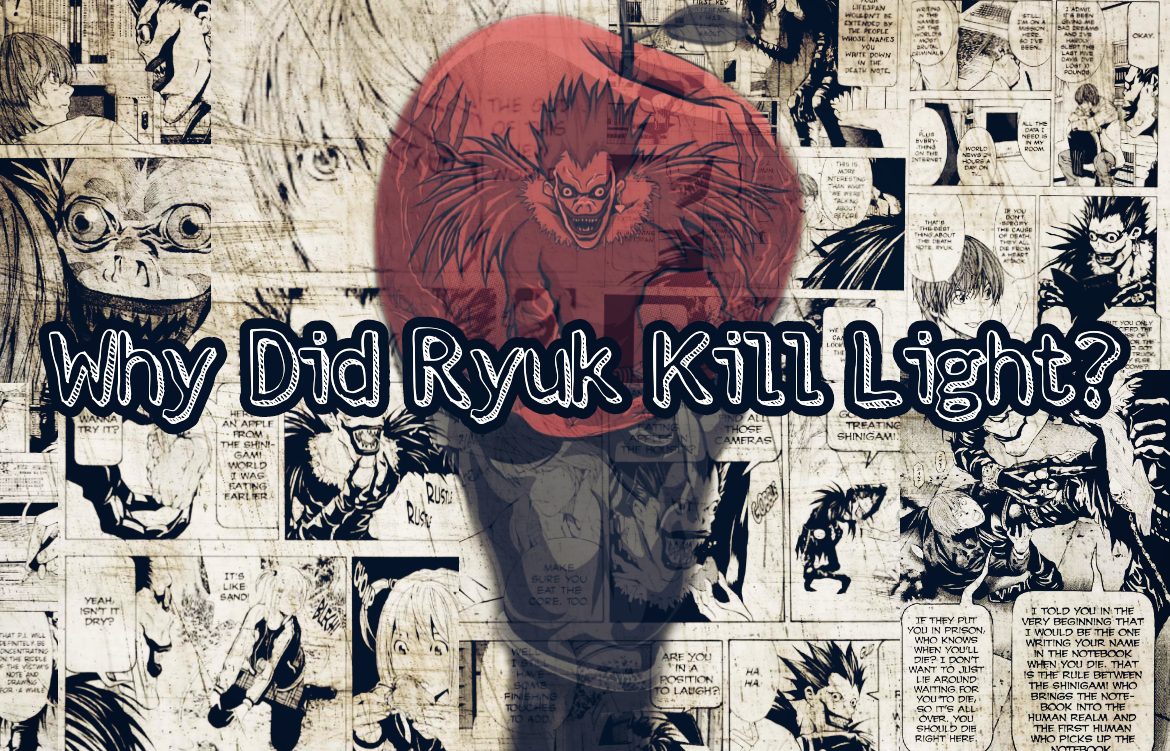 Why did Ryuk kill Light?

Several anime fans claim that their first-ever anime was Death Note. Naturally, the anime is breathtaking and drives a person to think and rethink everything the world has ever taught us about good and evil. The show’s two geniuses kept us entertained with their extremely clever chase of cat and mouse. However, what kept us further entertained was Ryuk, the Shinigami who dropped his death note seeking an adventure. However, Ryuk, as much of comic relief at times, was a huge mystery. While throughout the anime we see him eating apples and going along with Light’s plans, he ends up doing what no one could do: he kills Light. This posed several questions. He could have simply left with the death note after his capture, so why did Ryuk kill Light? What was he to gain?

Death Note is not just any cliched psychological anime nor a normal Shounen story. It is a well-plotted work of Tsugumi Ohba and Takeshi Obata. ‘Well-plotted,’ however, sounds rather like an understatement. Every character is created with reasoning. They blurt out the truth bluntly, without sugarcoating it. Irrespective of their status as a villain or a hero, what the characters say are things that one cannot deny easily. There’s an in-depth meaning to the anime that leaves a deep impact on anyone who watches it. This is an anime that urges people to think. The mysterious question remains: why did Ryuk kill Light? Well, here’s a full explanation of the bond between Ryuk and Light and an answer to your question.

Ryuk and Light: An Analysis

Before we answer why Ryuk killed Light, let’s first analyze Ryuk’s character. Ohba and Obata’s characters are never just ‘there’. Each character has a significant spot in the story that cannot be fulfilled by another character. This makes Ryuk stand in one of the most important parts of Death Note, without whom the entire plot would never exist. Had it not been for Ryuk, Light would have never found the Death Note. It is to be noted that for the beginning of the plot, it requires not just any other Shinigami but Ryuk’s existence. He throws his death note, claiming to be ‘bored’. Keeping aside the high intellect, the Shinigami resembled Light in this manner. Even when surrounded by a crowd, they couldn’t find anything interesting.

The relationship between Ryuk and Light is nothing dynamic. They are rather casual, and at times it is pretty clear they couldn’t care less about each other. However, despite this, the two make great partners. Ryuk enjoyed Light’s company. Perhaps enjoyment is an incorrect term, for he rather felt entertained by it. At times Ryuk acted like the best friend character in any anime that adds humor to the protagonist’s serious life. However, it is not to be misunderstood as a deep relationship. The underlying statement that Ryuk had been bored all along remains unchanged, and Light was a mere means of having fun.

Light perceived this well, perhaps because of which he would not even fear a Shinigami. Yes, he too was bored, but the reasoning for everything he did was way deeper than a simple ‘because I’m bored’. Their relationship was that of an entertainer and the entertained and nothing more nor less.

Why Did Ryuk Kill Light?

Now that we have established the relationship between Ryuk and Light, things do seem clearer. But the question still remains. Why did Ryuk kill Light? He could have easily left Light to rot in prison. Did he pity him? Was it really required to take an extra step? To be honest, there was never a necessity for any of the two characters to do anything that they did throughout the series. But that’s the whole point of Death Note, which is, irony.

Towards the end, Light walks down the path of madness from playing God. He gets caught by Near and gets drawn into a corner. I could go on about Light’s end, but this is not about Light as much as it is Ryuk. Several fans interpret it as ‘pity’ on Ryuk’s part towards Light. Wrong. Ryuk sure respected Light, but there wasn’t an ounce of care for him in Ryuk. Having Light in prison was not going to be fun for Ryuk. Shinigami are immortals, and so was he. He had already said that the one to write Light’s name would be Ryuk. Waiting would be too tedious, and thus he decides to kill Light right there, as all the fun went stale.

As much as I love Death Note and the ending, I also agree that Ryuk’s final blow was cold. A Shinigami is, after all, a God of Death by the end of the day.