Jeff Davis Returns on Whose Line Is It Anyway? Season 18 Episode 9 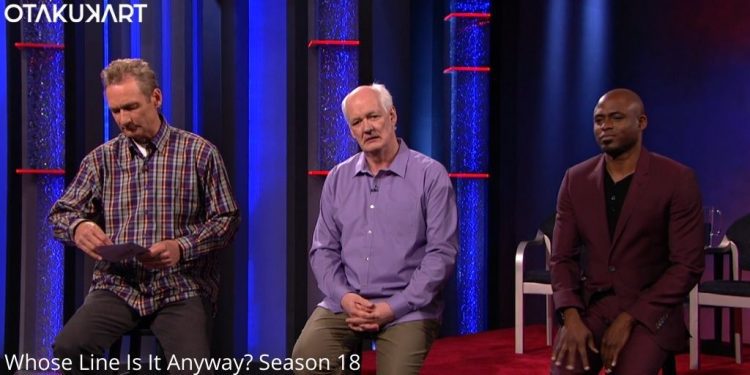 Whose Line Is It Anyway? Season 18

Whose Line Is It Anyway? Season 18 Episode 9 is set to see the return of another popular celebrity as a guest panelist. Meanwhile, the previous episode brought Jonathan Magnum for his first appearance this season. Although, it was his eleventh appearance on the show overall as a guest panelist. The show saw another set of exciting games that got the audience and viewers laughing out loud.

On the other hand, the performers seemed to enjoy their roles in different games. The American television series follows the comedy genre and features three regular performers who participate in improvisational comedy. Whereas a popular celebrity joins them as the fourth performer. The show has taken inspiration from the original British show that dawned the same title. Furthermore, it first came out in the year 1988.

Meanwhile, the American adaptation premiered on 5th August 1998. In addition to that, the show has been more successful than the original one as it still continues to keep the fans hooked to it. Dan Patterson and Mark Leveson have jointly created the show. On the other hand, the show stars Wayne Brady, Ryan Stiles, and Colin Mochrie as the regular performers. Whereas Aisha Tyler serves as the host of the show. The fans are quite excited to watch Whose Line Is It Anyway? Season 18 Episode 9, which is a few days away. But before discussing that, let us take a quick recap of what happened in the previous episode.

Whose Line Is It Anyway? Season 18 Episode 8 Recap

Episode 8 of Whose Line Is It Anyway? Season 18 came out on 8th January 2022. Furthermore, the episode starred Jonathan Magnum as the guest panelist, and the show kicked off with an exciting role-playing game. Jonathan was playing the role of a bachelor who has returned from prison and appearing on a dating type show, while the other three were portraying the contestants on the dating show. However, the twist in the game was that the contestants were such people that no one would want to go on a date with. Wayne portrayed the role of a grandmother on her motorized cart, while Colin portrayed a Scottish fortune teller who told people’s futures by looking at their butts. Meanwhile, Ryan portrayed melodramatic Noah preparing for the imminent flood.

The next game, titled Radio Show, featured Jonathan and Wayne playing the characters of Radio DJs. On the other hand, Ryan and Colin represented everyone else featured on their show. Before moving ahead with the game, Aisha asked the audience for suggestions for an animal as a subject to talk about on the radio show. The most aggressive suggestion was for the animal Sloth. Wayne and Jonathan went ahead, improvising the radio, which was all about Sloths. They talked very slowly while giving a comic reference to Sloths’ slow nature. On the other hand, Ryan called in as a lady asking about the difference between Sloths and Chandeliers. Meanwhile, Colin called in as Larry the Sloth. The game was another fun experience for the audience.

The third game in the segment was “Scenes From A Hat”. In this game, the audience had given suggestions for scenes that they would want the performers to play out, in a comic way, of course. The two teams were Wayne and Jonathan on one side and Ryan and Colin on one side. The first scene suggested was “Deleted Scenes From ‘90210’”. Moving on, the next scene was “World’s Worst Person To Share An Apartment With”. Whereas the third scene was “Songs That Celebrate Divorce”. The final game in the segment featured Ryan and Colin portraying TV voice-over artists who talked about the latest compilation album. Meanwhile, Wayne and Jonathan performed snippets of those songs. The episode eventually ended with Aisha announcing Jonathan and Wayne as the winners of the night.

“Whose Line Is It Anyway? Season 18 Episode 9 will release on 15th January 2022 at 8 pm ET on The CW.” In addition to that, the upcoming episode will feature Jeff Davis on the guest panel and the fourth performer. Furthermore, Jeff will be making his first appearance this season. Although, it will be his fifteenth appearance overall in the show.

How To Watch ‘Whose Line Is It Anyway?’ Season 18? Streaming Details

The improvisational comedy series has brought the viewers a great dose of laughter this season. That is why they are wondering about where to watch Whose Line Is It Anyway? Season 18? Well, the answer to that question is quite simple. “Whose Line Is It Anyway? Season 18 airs every Saturday at 8 pm ET on The CW in the United States.” Other than that, the first six seasons of the show are available on Amazon Prime Video. Whereas the viewers can watch the first ten seasons on Youtube TV.

Also Read: Who Is Wayne Brady Married To? The Comedian’s Personal Life

Tags: the cwWhose Line Is It Anyway?
ShareTweetShareSharePinSend
Previous Post