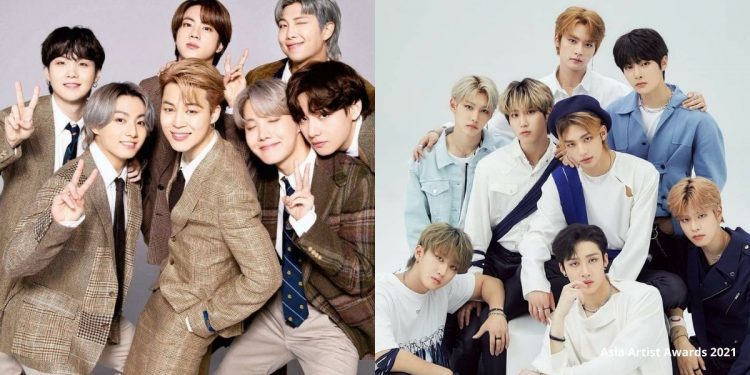 The Asia Artist Awards (AAA) took place on 2nd December 2021. The 6th edition of the Asia Artist Awards was held at the KBS Arena, Seoul. With the growing popularity of K-pop and K-dramas, fans were very excited to see who will take the grand prize home this year. The award ceremony is organized by ‘Money Today’ along with ‘StarNews’ and ‘MTN’ every year. Furthermore, Asia Artist Awards is a huge event where artists and actors from all over Asia are honored.

The award ceremony was made even more memorable by the hosts – MC Leeteuk (Super Junior) and Jang Won Young (IVE). Both were looking fabulous on the red carpet, wearing all black. Some other cherries on top segments were the performances by ITZY, SEVENTEEN, and many more artists. Moreover, nine Daesangs were awarded at Asia Artist Awards 2021. Let’s find out about all the artists who scored a Daesang (Grand Prize) at the event.

Singer of The Year (Daesang)- SEVENTEEN

SEVENTEEN won Daesang for the title ‘Singer of The Year’ at AAA in 2021. SEVENTEEN is a South Korean boy band that Pledis Entertainment formed in 2015. The band consists of 13 members S.Coups, Joshua, Jun, Hoshi, Wonwoo, DK, Mingyu, The8, Seungkwan, Vernon, Dino, Jeonghan, and Woozi.

Also, the boy band has won many awards before this as well, and some of their achievements include the ‘Prime Minister’s Commendation’ award, six ‘bonsangs’ (Main Prize), and two ‘daesang’ (Grand Prize). In 2021, SEVENTEEN released one album, ‘Not Alone, and two E.P.’s, ‘Your Choice,’ and ‘Attace.’ Moreover, the boy band SEVENTEEN performed at the Asia Artist Awards on the song ‘Rock with You.’

Another South Korean boy band scored a Daesang at the Asia Artist Awards 2021. The NCT 127 was awarded ‘Album of The Year’ Daesang for the music album ‘Sticker.’ NCT 127 is a sub-unit of NCT that was formed by S.M. Entertainment. The boy band debuted with a single ‘Firetruck’ on 7th July 2016. Currently, the group has nine active members Taeil, Johnny, Taeyong, Yuta, Doyoung, Jaehyun, Jungwoo, Mark, and Haechan.

Do Young represented NCT 127 while accepting the award. The artist appreciated his group members in his speech and thanked S.M. Entertainment. Adding that, he is grateful to receive such a significant award. Finally, he concluded by thanking his fans for loving NCT 127 fervently.

At the 6th edition of the Asian Artist Awards, the Stray Kids band won ‘Performance of the Year’ Daesang. JYP Entertainment formed the Stray Kids Korean boy band, and the band has been active in the music industry from 2017 till the present. Also, the Stray Kids was originally a nine-member band, but Woojin left the band in 2019. Currently, the band has eight active members  Bang Chan, Hyunjin, Han, Felix, Seungmin, Lee Know, Changbin, and I.N.

Other than receiving the award, the Stray Kids also gave a power-packed performance at the Asian Artist Awards 2021. The band performed on the song ‘Thunderous.’

BTS is the most well-known South Korean boy band in the world. Also, the population of the fans who grooved on the song ‘Butter’ is enormous. BTS received ‘Song of The Year’ Daesang at AAA 2021 for the song ‘Butter.’ The song was released on 21st May 2021. Also, with this song, BTS set many Guinness world records along with scoring numerous nominations and awards.

Moreover, the song ‘Butter’ has secured a nomination for BTS at Grammy Awards 2022. Even though they could not attend the Asia Artist Awards 2021, BTS made a speech acceptance video.

Stage of The Year (Daesang)- aespa

After so many boy bands finally, a girl group received a Daesang at Asia Artist Awards 2021. Aespa won the ‘Stage of The Year’ Daesang. The girl group consists of four members Karina, Giselle, Winter, and Ningning. S.M. Entertainment formed the group.

Lim Young Woong is a South Korean trot singer. Also, he has worked very hard as an entertainer and Youtuber. The artist debuted in 2016 with his first single ‘Hate You.’ Moreover, the singer was signed by Mulgogi Music as he was starting his career, and just in the time span of 4 years, Lim Young Woong was widely recognized.

In 2021, the artist released the single ‘My Starry Love’ on 9th March 2021. The single was such a hit that it became his first number 1 single to top the Gaon digital chart. Lim Young Woong received ‘Trot of The Year’ Daesang at Asia Artists Awards 2021.

At Asia Artist Awards, both singers and actors are honored with awards for their performances. This year the ‘Actor of The Year’ Daesang was won by ‘Squid Game’ actor Lee Jung Jae. Considering the amount of popularity the Netflix series ‘Squid Game’ received, it was not a surprise that the actor received a Daesang at AAA 2021.

Like all the other awards, ‘Actor of The Year (T.V.)’ Daesang is also a big deal, and this year, Lee Seung-gi was awarded this title. The actor has been working in the industry since 2004 till the present. Also, some famous projects Lee Seung-gi has been part of in 2021 are ‘Busted!’, ‘Team Up 072’, and ‘Loud.’

The South Korean actor Yoo Ah-In is an outstanding actor known for playing roles from wide spectra. Yoo Ah-In has been a part of award-winning projects like ‘Voice of Silence,’ ‘Antique,’ ‘Veteran,’ and many more.

However, the actor’s most prominent work is the record-breaking Netflix series ‘Hellbound.’ The series was released on 19th November 2021 and had six episodes. At the AAA 2021, Yoo Ah-In was awarded ‘Actor of The Year’ Daesang.

Also Read: K-Dramas Similar To Squid Game That You Should Watch

Wheel of Time Filming Locations: Where was the TV Series filmed?