Finally, all Grades have performed the third mission, 'Concept Battle.' Unfortunately, we have to bid goodbye to some contestants here. Also, the second spot in the debut team has been secured by Grade 1! 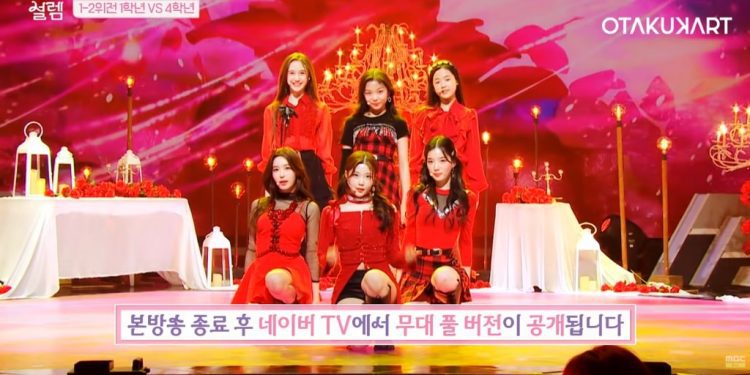 My Teenage Girl Episode 7 is coming soon with a more fierce battle! The previous episode reveals a new twist making the members more nervous about securing a spot in the debut team. Finally, the second spot in the debut team has been given to Grade 1. The upcoming competition has become more intense since Grades 3 and 1 have joined the debut lineup. Not to forget the little twist we will see in the next episode. Which alliance will win the battle and add their names to the debut lineup?

The latest episode reveals the performance of team ‘talented,’ who choose Red Velvet’s Red Flavour. With Grades 2 and 3’s performances, the final result for both Grades is announced. Although the outcomes bring good news for one, it becomes bad news for the other team. After the elimination, we watch Graders 1 and 4’s performance. After division, the teams perform according to their selected concept – ‘pretty,’ ‘competent,’ or ‘talented.’ As the final result reveals, one of the Grade 4’s contestants bid goodbye. Since the fourth mission has been revealed, the contestants seem to work up to get a spot in the debut team. After all, there is no losing anyone because only the winner will stay. Therefore, My Teenage Girl Episode 7 will show a new fierce battle among the grades to win a spot in the debut lineup!

Recap Of Ep 6: Grade 1 Takes The Second Spot In The Debut Lineup

Among Grade 1 and 4, Grade 4’s Kim Yoo Yeon and Kim Da Som enter the elimination round. However, with the lowest scores, Kim Da Som was eliminated. Meanwhile, Grade 1 ranks first and secures the second position in the debut team! By the ending, Yoo Kyun Sang announces the fourth mission called ‘Grade Union Battle.’ Find out how the fourth mission heads this fierce battle of teen girls in My Teenage Girl Episode 7!

What To Expect In Episode 7 Of My Teenage Girl?

The preview of My Teenage Girl Episode 7 is already out! In the next episode, Yoon Kyun Sang will explain the rules of the fourth mission, ‘Grade Union Battle.’ It seems the fourth mission will make this battle more intense. According to the rules, in Grade Union Battle, all Grades will form coalitions! It means for the mid-term of the second semester, two Grades will form an alliance, and they will fight against the other united Grades!

However, it is not all! The preview reveals another twist of the next mission. The winning alliance will get two spots each in the debut team. It means the four spots for the debut team will be given. After hearing the mission, all contestants seem to work harder and more desperate for the next round. After all, losing is not an option now because only the winner will get to stay! Thus, My Teenage Girl Episode 7 will show united grades performances!

My Teenage Girl Episode 7 will be released on 9 January 2022 at 8:20 pm KST on the MBC channel. During the third mission called ‘Concept Battle,’ the two contestants Park Hyo Lim from Grade 3 and Kim Da Som from Grade 4, bid goodbye. It’s unfortunate, but it is the rule of the survival game. Only winners stay till the end! Therefore, the upcoming fourth mission, ‘Grade Union Battle,’ will bring different sides of the contestants. Thus, don’t forget to watch every new episode of My Teenage Girl on Sunday. All episodes run for 1 hr 30 min.

South Korean viewers can watch My Teenage Girl on the MBC channel at 8:20 pm KST. Afterward, the episode will also be available on Wavve (only in South Korea). It is an online streaming platform. On the same day, My Teenage Girl will be out at 6:20 am in the USA, 11:20 am in the UK, 4:50 pm in India, and 10:20 pm in Australia. The Korean variety show is also streaming on Rakuten Viki and Kocowa (accessible only in North and South America) with English Subtitles for international viewers.