Since 2016, he has hosted the nightly political talk show Tucker Carlson Tonight on Fox News! 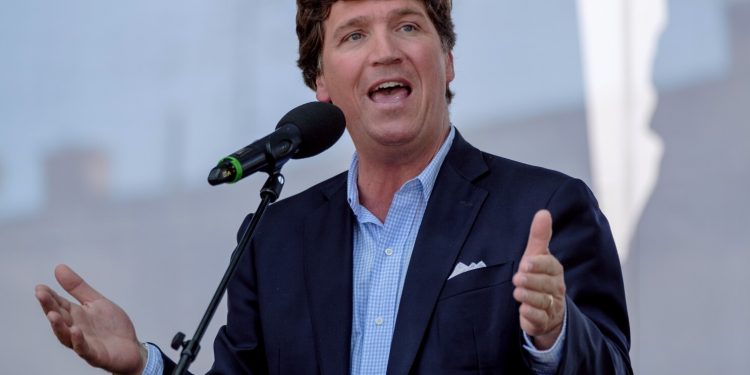 Well, living life in the limelight might look interesting, but it’s not that easy and glorious as it may look from a distance. Now and then, you might have to face new challenges. And then things become even more difficult and challenging when you are the better half of someone who is a conservative television host and a political commentator! But Tucker Carlson’s wife is not afraid of challenges. She knows how to support her love. So, who is Tucker Carlson’s wife? As of now, it’s been several decades that the two are warming each other’s hearts. And they both had always stood together in the waters of distress. And if you want to know that who is the wife of Tucker Carlson, then this article is all that you need.

As the below sections of this article would unfold, you will be getting to know several unknown and engrossing facts related to the personal as well as professional lives of Tucker Carlson and his lovely wife. Well, it would be worth mentioning over here that they both are high school sweethearts! And now, let us know more about this sweet couple!

Who is Tucker Carlson’s Wife?

Tucker Carlson’s wife is Susan Andrews. And they have both known each other since they were fifteen years old. The first time when the two got to know each other was in the first week of 10th grade. To which once Tucker Carlson confessed that he was head over heels as Susan was the cutest 10th grader in America. And interestingly, she too shared a similar feeling for Tucker. In one of her interviews, she opened her heart about their first meeting. She said that she found a bounce in his walk. Moreover, he was wearing khaki pants paired with a ribbon belt, and yet she felt like one can find him looking so optimistic.

Before we reveal the next interesting things about this couple, we would like to ask you a question that in your school days, have you ever dared to date the son or daughter of the headmaster? It is because Tucker Carlson was courageous enough to do so. Yes, Susan Andrews is the daughter of his school’s headmaster. Her father, Rev. George E. Andrews II, was headmaster of St. George’s School from 1984 to 1988. It was a boarding school in Middletown, Rhode Island.

Tucker Carlson then went to Trinity College in Hartford, Connecticut, where he graduated in 1991 with a BA in history. However, side by side, he was also maintaining a long-distance relationship with Susan Andrews. And to everyone’s surprise, six months before his college graduation, he gained all of his courage together to ask for permission from Susan’s parents for their wedding. And finally, the two of them had read their wedding vows in the school chapel on 10th August 1991.

Their journey as a married couple!

Over time, the two have potentially proved their love for each other. And interestingly, their love story is heavily admired by people around the globe. Moreover, the two are also blessed with four children. They are the parents of three daughters, namely Dorothy, Lillie, and Hopie, and a son named Buckley. Both Tucker and Susan share the responsibilities of parenting their kids. Additionally, Susan is a stay-at-home mom.

But their conjugal journey wasn’t easy. It was only their mutual trust which helped them to survive those hardships. Once Tucker Carlson was accused of rape allegations. But at that time, also Susan had his back. And later, it came out that the woman named Kimberly Carter, who made all those allegations, had a mental disorder that made her think Tucker Carlson had assaulted her.

Once Tucker’s profession indirectly had led his family to face the agitation of the protests. It was in 2018 when Susan was alone in the house, and a group of Antifa activists protested outside their Washington, D.C., home.

Also Read: Gyles Brandreth Net Worth: How Much Does This Former Politician Earn?