Are you one of the millions of people who woke from a good night’s sleep and are confused about who this man Mark Johnson? You are not alone, mate. Every tweet on Twitter since last night seems to be mentioning Mark Johnson. You may be thinking, who is he? Is he a Star Wars Hero? Is he the next President? or Is he the man that has found the ultimate cure to the novel coronavirus? None of the above. Mark Johnson Mark Johnson is a TV news Anchor at KTVB News Station. KTVB is an NBC-affiliated Television Station licensed to Boise, Idaho, United States.

On Tuesday night, Idaho’s local News Source KTVB, uploaded an accidental tweet. The tweet had Mark Johnson’s name and a link to his profile; that was it. The tweet has more than seventeen thousand comments and more than eighteen thousand likes. When people of Idaho woke up from their sleep on Wednesday to see their local news source has tweeted just two words, Mark Johnson, out of the blue, they found it hilarious. People were at first confused but then turned the entire situation into a meme. Everyone from the KTVB News Station responded to the situation in a funny way. In this article, we will tell you who the viral Mark Johnson and how he has become a meme king.

Who is Mark Johnson?

Mark Johnson is an anchor at KTVB in Boise, Idaho. He must have been a very special anchor for the news channel to tweet his name and a link to his bio for no reason whatsoever on Tuesday night. Unlike the rest of the world that started making memes immediately, I took the time out to check out Mark Johnson’s bio because I wanted to know how good your bio has to be for the news station’s very own Twitter handle to promote you without any reason. I learned that the KTVB news channel is a funny place because the very first line of his bio says ” National Edward R. Murrow and Emmy award winner Mark Johnson returned to Idaho’s News Channel 7 on April 1996 …. and who could blame him?”. It’s funny because Mark Johnson, the anchor, has got many awards, but an Emmy isn’t one of them, but Mark Johnson, the producer, has won an Emmy for the series Breaking Bad.

He worked at KTVB from 1988 to 1988 and then traveled to WISN-TV, where he continued sports broadcasting in his impressive unique style. He won Milwaukee’s top sports stories continuously in 1990, 1991, and 1992. He joined WTAE-TV in Pittsburgh, where he covered the Steelers in1996 Super Bowl while anchoring the Nightly Sports at the same time. He came back to KTVB in the spring of 1996 as the Sports Director. He was promoted to the station’s main anchor in December 2003 and continues to cover stories of importance around the world for Idahoans. 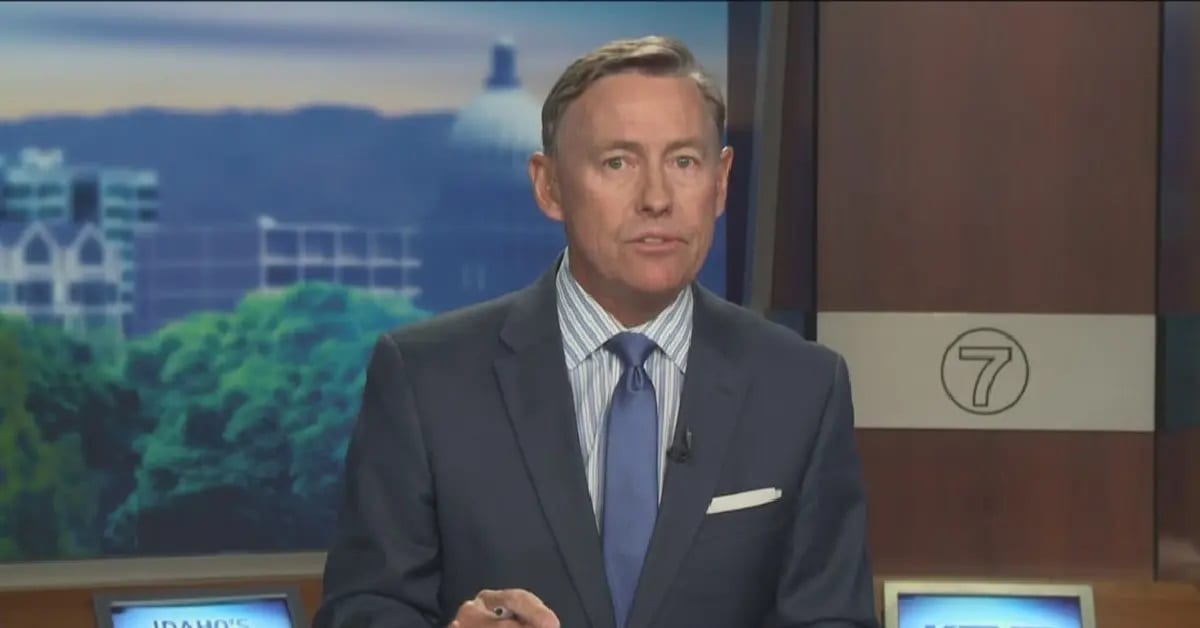 Mark Johnson landed an exclusive interview with Larry Craig, an Idaho-based GOP Senator who got into a scandal that captured the nation’s interest in 2007. His hard work and devotion in covering stories affecting Idahoans have brought him several opportunities in Washington, D.C, where he was even called for the confirmation hearings of former Idaho Governor Dirk Kempthorne. Dirk had been appointed by President George W.Bush to the cabinet position. He was asked by Kempthorne to learn what it’s like to be a cabinet member on the first day of the job, which of course, became an award-winning special on KTVB.

Mark is married to Chris Plishka(from Baraboo, Wisconsin) and has two teenage twin daughters, Alexa and Grace, which he suspects are the reason behind him going viral.

Mark Johnson has done an entire segment on KTVB on Wednesday, reacting to going viral. ” My phone blew up from friends around the country who watched it unfold late into the night. It was pretty nuts,” He said.

Mark said he did not really mind and was happy to provide a chuckle to everyone, especially after the year we have all had.

The best part about this entire scenario was obviously the memes. He was trending on Twitter and had millions of memes in his name. Mark Johnson and his KTVB staff themselves have contributed to a few; let us have a look.