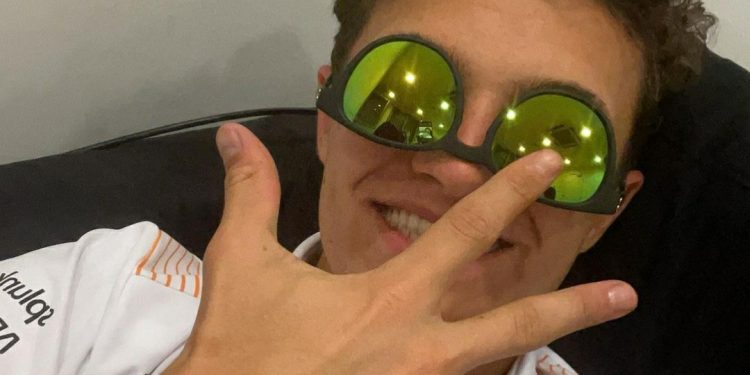 People are wondering who is their favorite Formula One racing driver, Lando Norris dating in 2022? Car racing has always been one of the favorite sports of boys, especially when it’s Formula One. In case you aren’t much aware of him, Lando Norris is a motorsports racing driver who is at present competing in Formula One. The 22-year-old boy is gaining huge fame and recognition among people across the world because of his incredible notable driving skills and styles. At such a young age, Lando Norris has earned several honors like MSA Formula Championship, Eurocup Formula Renault 2.0, and a lot more.

This motorsports racing expert, Lando Norris, is currently dating someone whom he loves a lot. Recently, he has posted a picture of him with his girlfriend, sharing a cute romantic close look, with the caption ‘My Sunshine’ on his Instagram account. That single post is ruling over the internet. It made his fans question who is Lando Norris dating. For more details of his love life, you must dig into this article. We are about to spill out the beans!

Also read: Lenny Henry’s Affair: Who Was The Actor Rumored To Be Dating?

On 4 January 2022, Lando Norris posted a picture of him with his girlfriend, Luisinha Oliveira, on his Instagram account. If you have missed out on that post, check the picture below. The picture portrays how deeply they are in love with each other. With cute kisses, they are simply looking great before larking around in the dunes. All his Formula One fans took to the comments to shower love for the couple. Finally, the racer made his relationship official to the public. They seem completely perfect!

With this single post, many of his fans, especially female fans, have also gotten upset. Few joked that they didn’t like the ‘It’s Official’ thing.

Luisinha Oliveira, his girlfriend, is a 22-year-old Portuguese model. Little did you know that she is managed by the Portuguese Modeling Agency Central Models. She is quite actively working in the fashion industry. Another identity of her, she is the sister of the beautiful actress Beatriz Barossa. Luisinha is quite active on her Instagram account and has posted pictures of her with her boyfriend, the Formula One star Lando Norris which they clicked during their vacation spent in Dubai. Not just on Instagram, but also on Tiktok, Luisinha boasts almost 30K followers.

When asked about how they met, it is not yet known as neither of the love birds have made it to the public. With time, it is believed that he is going to reveal more things about his relationship with her. We will keep you updated with that! Both Lando and his girlfriend Luisinha are of the same age and thus, there lies clear mutual understanding between the two. The F1 expert confessed how deeply he is in love with her. He also stated that he is set to explore happiness and love with her in the upcoming days of his life.

Also read: Fotis Dulos’ Girlfriend: Who Was The Businessman Dating?

The young 22-year-old professional motorsports racing driver, Lando Norris, was born on 13 November 1999. He is British-Belgian and was born in Bristol, England, United Kingdom. When it comes to his family, he was born to his mother, Cisca Wauman, and his father, Adam Norris. His height is 1.7 meters tall.

When it comes to his achievements in his professional field, Lando Norris has achieved many. Some of the notable ones include – MSA Formula Championship, Toyota Racing Series, Eurocup Formula Renault 2.0, Formula Renault 2.0 Northern European Cup, Mc Laren Autosport BRDC Award, FIA Formula 3 European Championship, and many more. As of January 2022, his Instagram account has crossed over 4.7 million followers. Lando Norris is too young and has achieved a lot. It is believed that he is set to work harder and achieve all his goals shortly. Good luck with his love life too!

Also read: Who is Suni Lee’s Boyfriend? All About The Olympic Gymnast’s Dating Life in 2022