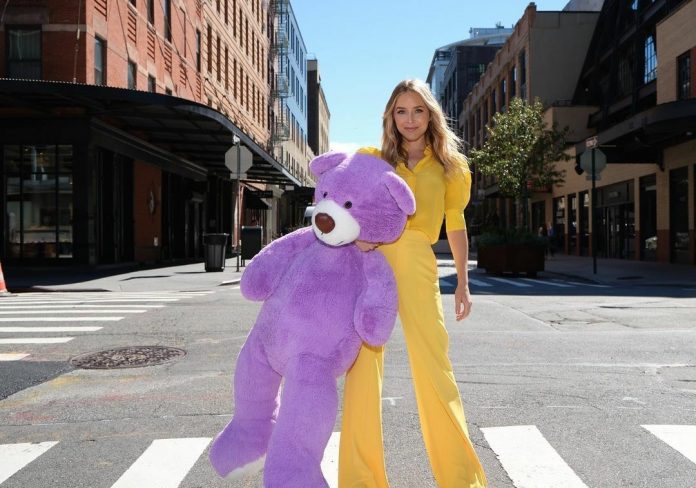 Jenny Mollen married the love of her life. If you have ever wondered what a romantic type means? We suggest having a look at Jenny Mollen and her husband’s wonderful, glorious love story. They are the leading character of their own adorable beautiful super cute love story. You met a person, fell in love, and cherished a beautiful story. However, that is something that usually happens in the movies. But if you look at Jenny’s love life, we can say this surely; you are going to fall in love again.

The romantic couple was caught several times on the camera, gushing about their feelings for each other. They met on the movie set and worked together. Although his character did not end up with Jenny’s character, however, they ended up together in real life. The romance started on the set by filming “My Best Friend’s Girl.” Certainly, those who have watched the movie might have guessed the name of Jenny Mollen’s husband? And those who are still unversed, let’s delve into the article and find out who Jenny Mollen is married to? Who is the handsome hunk who has stolen the precious heart of our beautiful superstar, Jenny Mollen?

Also Read: Who is Melissa Gilbert Married To Now? Her Relationship Status in 2022

Who Is Jenny Mollen Married To?

While filming “My Best Friend’s Girl,” Jenny’s eyes got stuck on this man whose name is Jason Biggs. Guessed it right, the man who has stolen the heart of the beautiful diva is none other than the American actor Jason Biggs who co-stars with Jenny in “My Best Friend’s Girl.” As we mentioned above, although their character did not end up together, the two fell head over heels for each other.

The blossoming romance caught the media’s attention when the two were spotted together. Jason fell for the lady every single day and finally decided to rent a permanent room in his heart for Jenny. After six months of dating, Jason went on his knees, asking his super gorgeous girlfriend to be his wife. Who can deny Jason’s proposal and that too when you are in love? Happily, Jenny says yes.

On a beautiful day in April 2008, Jenny married the man of her life, her love, Jason Biggs. As the days passed, the happily married couple welcomed two kids together. Their elder son’s name is Sid, and the younger one is known by the name of Lazlo. Their love story is pretty interesting. Even after their marriage, they worked together. Jenny and Jason co-hosted the American Gameshow “My Partner Knows the Best.” They worked together on several movies and shows.

Who Is Jason Biggs?

Jenny Mollen’s husband, Jason Biggs, is an American actor and a well-known comedian. He is a household name in the country and is best known for the portrayal of Jim Levenstein in the American comedy film series “American Pie.” Born on 12 May 1978, the 44-year-old actor is celebrating his birthday today.

Biggs was introduced to the industry back in 1991, and ever since then, he never missed a chance to impress his fans with acting and hilarious comedy punches. He was born in New Jersey to Angela Biggs and Gary Biggs. His mother was a nurse, while his father worked in a shipping company as a manager.

Jason did his graduation from New York University and then transferred to Montclair State University. However, he dropped out of college to pursue a career in acting. He started his acting career at the tender age of five. However, his professional acting career was started in 1991 in television series named Drexell’s Class.

Although he worked on several short series and dramas, he rose to prominence from the American Pie. The movie went on to become an international hit, and fortunately, Jenny Mollen’s husband, Jason Biggs, became the household of the industry. Some of his best work includes Saving Silverman, Orange Is the New Black, Eight Below, and many more.