The Songstress Has Been Linked With A Popular Youtuber and Rapper 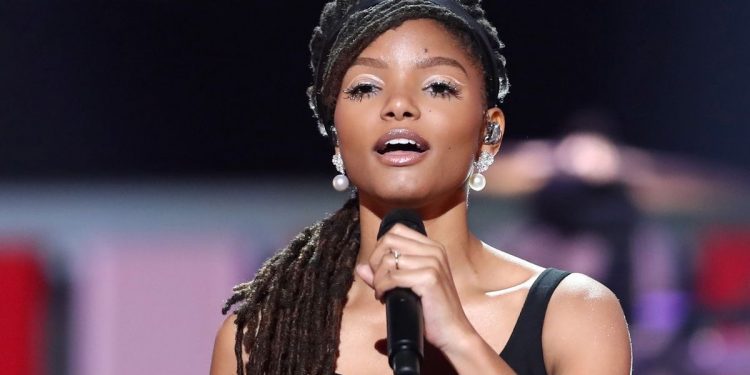 Want to know who is The Little Mermaid Star Halle Bailey Dating? Halle Bailey is one of the famous sisters from the popular R&B musical duo Chloe & Halle. The two showed interest in music at the young of 11 and soon started their own Youtube channel! Soon enough, Halle and her older sister, Chloe, started covering songs on YouTube and amassed a huge number of subscribers. The musical sisters’ unique voice was an instant hit with a growing number of viewers. They went on to grab the attention of popular talk show host Ellen DeGeneres.

She invited the duo onto the Ellen Degeneres Show back in 2012. Iconic sensation Beyonce soon recognized their musical talent. Beyonce soon signed both the sisters to her popular record label named Parkwood Entertainment. The sisters have bagged as many as five Grammy nominations as well. Halle Bailey is all set to play the role of Ariel in the upcoming Disney live-action movie, The Little Mermaid. From making music covers to becoming the next big face for Disney,  Halle Bailey has surely come a long way. Let us take a look at all the details and lesser-known facts about Halle Bailey Dating.

Who Is Halle Bailey Dating?

It is rumored that Halle Bailey is allegedly dating popular YouTuber and rapper DDG. The rumors came into existence in the first place after the songstress was spotted with the rapper were spotted together attending an Usher concert on New Year’s. As the two were looking quite cozy, the rumored couple was seen all smiles. The pair has not yet posted any pictures or made the alleged relationship Insta official.

Not to forget, Usher himself posted a few pictures from the concert on his Instagram story. These pictures included stories of the rumored pair together backstage after the concert ended. Usher even tagged their Instagram handles in the post as well. The alleged pair has not yet confirmed their relationship nor addressed these ongoing rumors yet.

The young artist, whose real name is Darryl Dwayne Granberry Jr., gained fame and recognition as a rapper and YouTuber. DDG initially launched his Youtube channel and soon after started making music which gained huge attention from music fanatics. Take a look at these pictures as the young songstress looks back at the year 2021.

a glimpse of my 2021🥺💓a year i will never forget..from living overseas to coming home and still getting to do what i’ve always dreamed of..i feel immensely proud of myself ..made it through with God ..I thank God for this year ❤️and i’m so looking forward to the next one. ❤️ pic.twitter.com/W41eKLucVq

His YouTube channel turned out to be a high success and amassed a whopping 2.66 million subscribers! DDG went on to release his first-ever studio album, titled Valedictorian, back in 2019. His 2020 single, Moonwalking in Calabasas, earned a position in Billboard Hot 100 for as many as 11 weeks! The single track also successfully peaked at No. 81. The song went on to become platinum in June 2021. It seems like the rapper has been swept off his feet with Halle’s charm as they attend an Usher concert together.

The Songstress Teared Up Opening Up About Little Mermaid Casting

The songstress and actress had a little emotional breakdown as she opened up about behind cast as Ariel. The young artist admitted that she was quite shocked when she got a call for the casting and the whole thing felt rather surreal. The actress recalled how to prepare for the role; she ran lines with her dad and suddenly started sobbing as she went through the lines. Halle couldn’t believe that she was going to play such a big role. The young artist further admitted how nervous she was during the auditions as it was a surreal experience altogether.

While talking about her love for the popular Disney character, Halle explained how representation matters. She further added that this will show young, beautiful Black and brown children that they can do this too. Filming for The Little Mermaid has already wrapped and will star Jonah Hauer-King as Prince Eric, Javier Bardem as King Triton, and Melissa McCarthy as Ursula. The movie will be directed by Rob Marshall. The release date for the big Disney live-action movie is yet to be released. We are excited to see the age-old tale come live on the big screens.

Also Read: Who Is Blake Horstmann Dating? Who Is The Reality Star Seeing These Days?