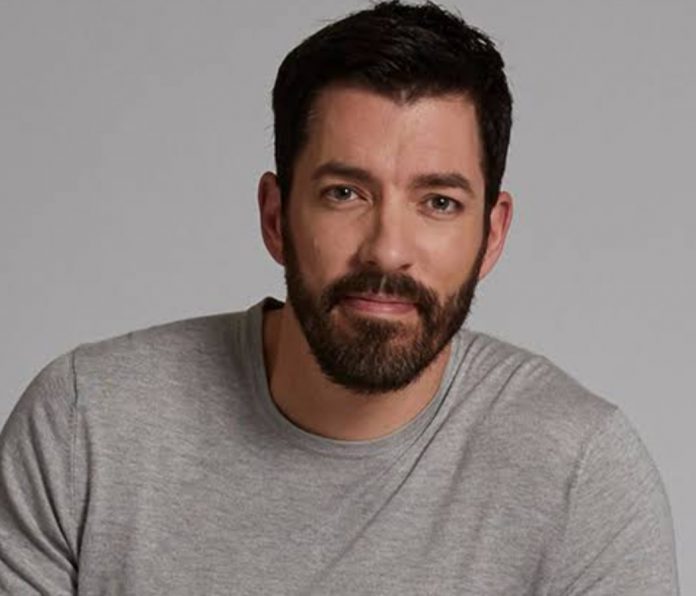 Here, we shall discuss who Drew Scott is dating. What do we know about this reality television personality’s love life? Starting from the basics, Andrew Alfred Scott is gaining popularity and recognition by hosting Property Brothers. He has a twin brother, Jonathan Scott, who also hosts the series. It’s a home renovation program where we see Drew as the realtor. Besides this, he has also worked in numerous television series and films. The notable ones include Talking Dead, Home To Win, Ryan’s Mystery Playdate, Girls5eva, A Christmas Parade, etc. Well, they also run a production company, which goes by the name The Scott Brothers. It has worked for the songs Hold On, My House, You Chose Me, etc. Briefly, we may say Drew Scott is pretty much successful in his career.

Knowing a bit of Drew’s noteworthy works, fans are interested to learn how things are going in his personal life. Well, Drew Scott is not seeing anyone but is already hitched to the love of his life. It’s been several years of their marriage, and their relationship is growing stronger with time. Moreover, the couple has taken their bond to the next final step with so much love for one another. They do have good news too! What’s that? Let’s dig into this article to learn who Drew Scott is dating and their relationship in detail.

Drew Scott is married to his long-time girlfriend, Linda Phan. It was back in 2010 that the love birds met each other for the very first time at the Toronto Fashion Week event. The Scott Brothers own a house in Las Vegas. At the beginning of 2014, Drew and Linda lived together in that home twice a year. In case you are wondering, Linda Phan, being his wife, also serves as the creative director of Scott Brothers Entertainment. Her work is to oversee its digital content, marketing campaigns, and merchandise lines.  As per Drew Scott, he and his wife both are ‘workaholics.’

With having love for each other and working together, Drew Scott proposed to Linda Phan on 13 December 2016. After a couple of years, more precisely on 12 May 2018, they got hitched in Italy. Well, you may call it a destination wedding. It incorporated both the Scottish and Chinese cultures and heritages. Moreover, their wedding also got featured in their show, titled Drew and Linda, Say I Do. It aired back on 2 June 2018. Little did you know, Drew is a very romantic person. Along with Victoria Shaw and Chad Carlson, he co-wrote a song titled ‘You Chose Me’ and performed it for his lovely beautiful wife, Linda.

Back in October 2017, the couple relocated themselves to Los Angeles. They also talked about planning for a baby. After undergoing a harsh fertility journey with the IUI and IVF treatments, last year in December, she announced to be pregnant. They also shared that the due date is in May 2022. Recently, Linda has posted pictures of her maternity shoot. Both Drew and his wife are excited and nervous about being parents for the very first time. Congratulations though!

Also Read: Who Is Joe Locke Dating? All About The Heartstopper Actor’s Personal Life

Besides knowing who Drew Scott is dating and their relationship details, people are interested to learn more about him. Born on 28 April 1978, Drew is 44 years old at present. He was born in Vancouver, British Columbia, Canada. He is pretty much active on Instagram, having over 2.4 million followers as of the day.

Moving on with his career, Drew Scott has numerous television works such as Playing House, Brothers Take New Orleans, A Very Brady Renovation, etc. Drew also took active participation in Dancing with the Stars Season 25. He was then partnered with a professional dancer, Emma Slater. Back in 2019, he also hosted the show Rock the Block. Besides his television career, Drew also has publication works. The list includes Dream Home: The Property Brothers’ Ultimate Guide to Finding & Fixing Your Perfect House (2016), Builder Brothers: Big Plans (2018), etc.

Best Wishes to Drew Scott for the upcoming days of his career. Also, loads of positivity, love, and blessings to the couple for their new journey.