As vast and creative, the Marvel Cinematic Universe has become. There is always a source of story it can take for its movies and TV shows from its Marvel Comics. But that doesn’t mean the studio has shied away from acknowledging some of the popular real-life cases and used them for the story. Apart from the comic book source obviously. For example, time Marvel used the mention of Phoenix Lights in Captain America: The Civil War. That mentioned teased the arrival of Captain Marvel in near future. A fan theory that suggested its because of the Kree-Skrull war we saw in the 2019 film. But this time it’s more than theory as Marvel’s latest web series Loki takes a shot at the mystery of D.B. Cooper which was indeed a real case. So Who Is D.B. Cooper?

Here we are taking a look at the mystery considered one of the greatest unsolved FBI cases and is only unsolved air piracy ever. The case was perfectly portrayed in Loki. Thus, suggesting some real-life incidences do exists within the Marvel Cinematic Universe. Loki re-iterated and brought its creative take on what would have happened for the D.B. Cooper mystery. In the end, also portraying their explanation of how it went down resulting in become a mystery that people on Earth are still trying to figure out. So let’s break it down piece by piece, starting with Who Is D.B. Cooper? and then moving on to its portrayal in Loki.

So the original story of D.B. Cooper dates back to 1971. In the afternoon of November 24, an unidentified man going by the name Dan Cooper boarded a Boeing 727 aircraft. The craft was traveling from Portland and Seattle. The man was somewhere in his 40s sporting a black suit, black tie, and white shirt. When the flight was in the air, he handed a note to the flight attendant letting her know about a bomb he has aboard. The same way he told the captain demanding four parachutes and $200,000 in twenty-dollar bills for ransom to ensure the safety of passengers and the crew. 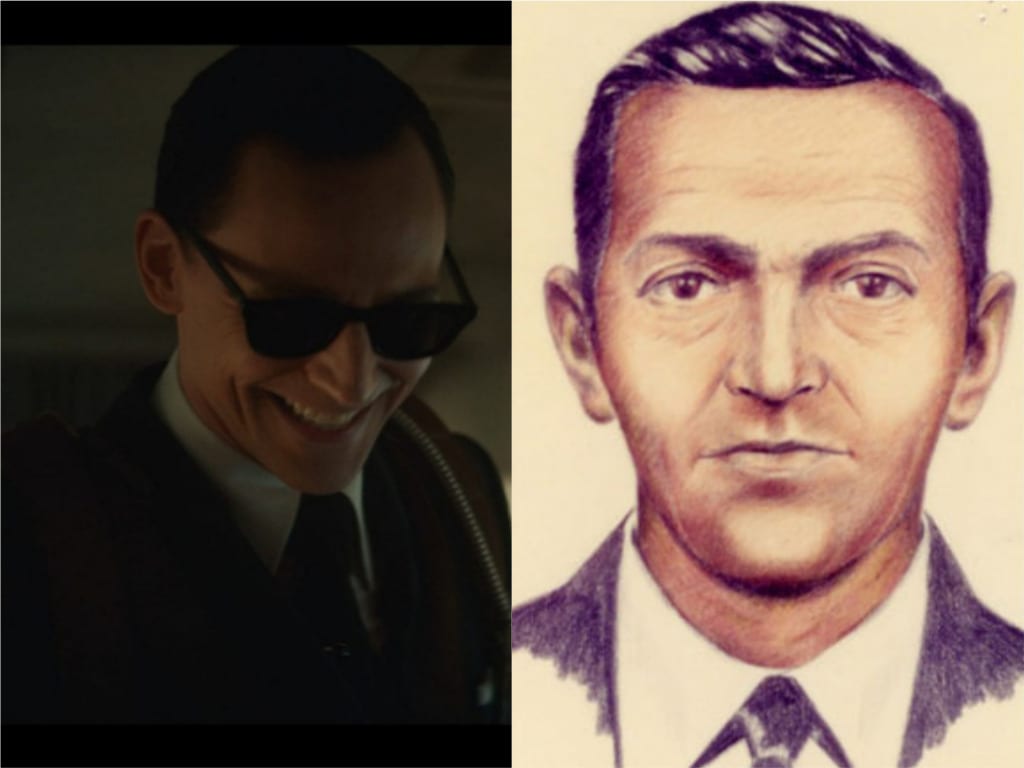 Loki’s D. B. Cooper and the Sketch Of Real-life D.B. Cooper

Next, the aircraft landed in Seattle and the exchange was made. While all the passengers were set free, D.B. Cooper took the money along with several aircraft crew back into the air. Heading towards Mexico City, D.B. Cooper flew out in the sky mid-air like a professional with all the money. The flight later landed safely. But the mystery here is that D.B. Cooper was never found. The FBI went on to hunt D.B. Cooper down for 45 long years. To this day, they haven’t found him and no one knows who or where he is. Theories are suggesting he may have not survived the fall and many more. But those are just theories after all. The year 2016 saw the FBI calling the investigation off but the agency has continued to request any evidence related to it. The case is the only unsolved air piracy in commercial aviation history.

So, Marvel took a creative cue at the D.B. Cooper mystery in the latest Disney+ web series Loki. Right in its first episode, we saw Loki spending his time under the interrogation of TVA. The Time Variance Authority who were investigating a variant of Loki killing their officers. This led them to bring the 2012 version of Loki in when he stole the tesseract. During the time of his interrogation, Mobius, an officer of TVA showed him a glimpse of his past failures along with a little of his future. During those, several scenes emerged from the past Marvel movies. But one came in as something new we saw and took the cue and reference to D.B. Cooper.

This new scene saw Loki as D.B. Cooper doing everything the real-life version of the character did. From handing note to the crew to flying out in thin air with a whole lot of money. Everything is done to perfection taking a cue from the real story. The only thing was, the final moments of the scene saw Loki calling Heimdall to take him through the Bifrost back to his home in Asgard. Thus MCU explaining the mystery of D.B. Cooper in their universe. The following moments see Mobius questioning Loki stating he can’t believe he was D.B. Cooper after all. To which Loki answers stating it was a bet he had with Thor which led him to perform this in Midgard a.k.a The Earth.