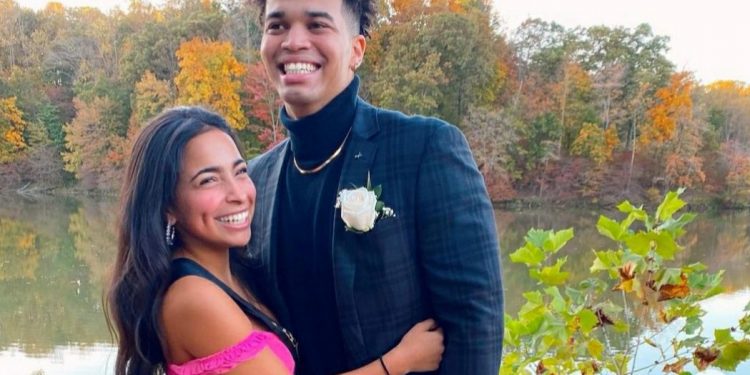 Who is Caleb Williams’ Girlfriend? What do we know about this young footballer’s love life and career? He has just started his professional career and is gradually gaining success in the field. Not just because of his football career, but also his love life is lately gaining huge interest among the fans. Because of the Covid-19 pandemic, he couldn’t play high school football. At present, Caleb Williams is playing for the Sooners football team at the University of Oklahoma, where he has been enrolled for graduation.

It’s been a few years since Caleb Williams is dating someone. It was at the end of 2020 when he confessed his love for his lady love through an Instagram post. Their relationship is low-key and thus fans want to invest themselves in their love story. Little did you know, that his girlfriend has also a keen interest in sport, specifically hockey. Though the sports are different, their similar interest in sportsmanship has built mutual understanding between them. For more details about Caleb Williams’ Girlfriend, you must dive into this article till the end.

The American Football Quarterback, Caleb Williams is dating the love of his life. Well, her name is Valery Orellano. She is Latin-American and hails from Maryland.

How Old is she?

Valery Orellano was born on 25 November 2002. Based on her birth year, she is 20 years old as of 2022. Born and raised in Rockville, Maryland, she is currently a student.

As far as her family is concerned, Valery Orellano was born to her parents, Anibal Orellano (father) and Nancy Janeth Quinteros (mother). She also has three siblings- Luis Orellano, Alejandro Orellano and Camila Orellano. Valery is very much close to her siblings and often shares pictures with them on her social media accounts.

When it comes to her education, Valery Orellano studied at the Richard Montgomery High School, Rockville. There, she played hockey with the women’s field hockey team. Like her boyfriend, Caleb Williams, she has also an interest in sports. So, that makes them a good pair! Thereafter, she joined and is currently studying at the University of North Carolina at Chapel Hill.

When it comes to Caleb Williams relationship with his girlfriend, Valery Orellano, to date it has been smooth. Fans have shown huge interest in their love story and are curious to know how they met. Neither of them has made it to the public of how they met each other. Initially, they kept it away from the limelight. It was in October 2020 when Caleb Williams first posted a goofy romantic picture of them. That was when they went official! Valery Orellano is often seen to attend the Sooners game to cheer up her love.

Whenever he is asked about his girlfriend, Caleb Williams said that Valery is very much supportive, loving, and caring. His girlfriend doesn’t maintain a high profile like him, but there has always been mutual understanding and respect between the two.

Also read: Who is Ayesha Singh’s Boyfriend in 2022? The Indian Television Star’s Love Life and Dating

What is Caleb Williams famous for? Personal Details

Born on 18 November 2001, Caleb Williams is an American footballer who plays at the quarterback position for the Sooners team at Oklahoma University. Before that, he attended Gonzaga College High School in Washington, DC. When it comes to his family, he was born to Carl Williams (father) and Dayna Price (mother) who have supported him a lot. His height is 1.85 meters and weighs 95 Kg.

Moving on with his professional career, Caleb Williams is going to be the no.1 overall draft pick for NFL (National Football League) in 2024. This year, on 3 January, he entered the transfer portal. His outstanding football playing skills have garnered him USA Today High School All American in 2019. Not only that but also last year, he won Second Team All-Big 12. Within such a short period, Caleb Williams had achieved a lot and we are sure he is set to achieve all his goals and aims shortly.

Since he is young, it is believed he is going to be more successful in the upcoming days. Wishing him good luck in his career! Hoping he to explore more happiness and love with his lovely girlfriend!

Also read: Who is Suni Lee’s Boyfriend? All About The Olympic Gymnast’s Dating Life in 2022

Who is the Protagonist of BEM movie: Become Human?