Who Does Monica End up With In Friends? 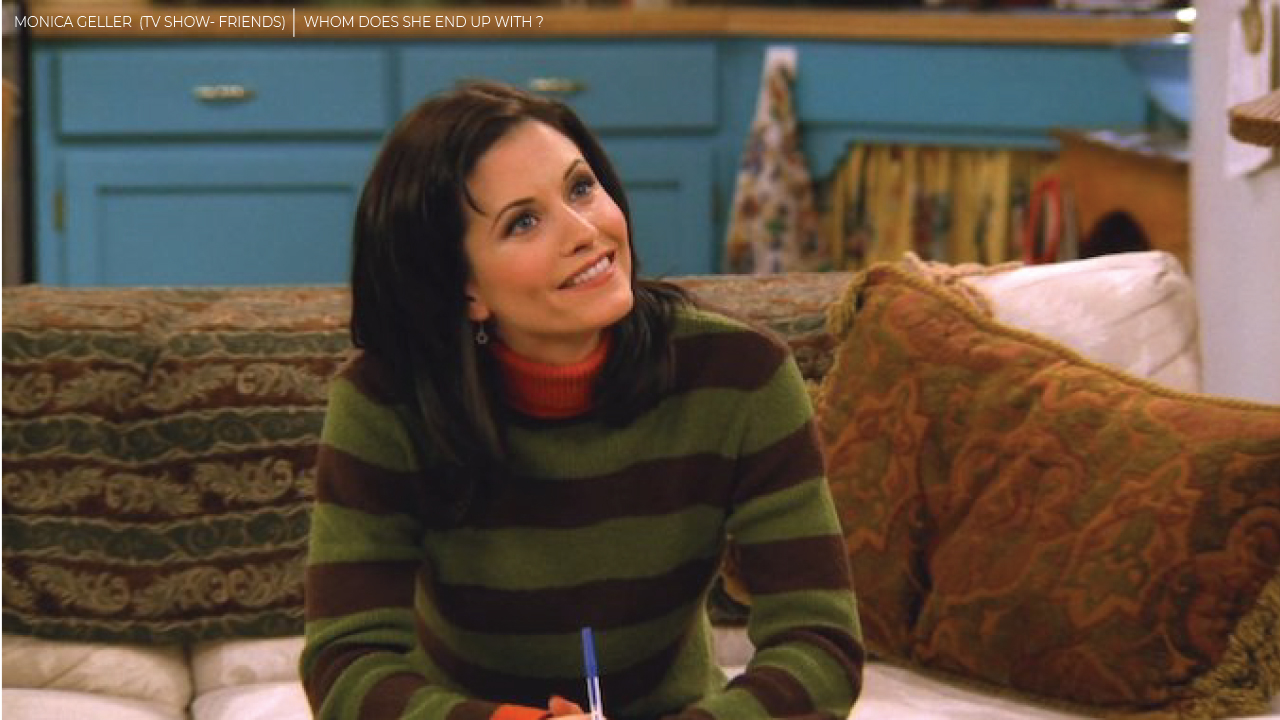 Today we will talk about Monica Geller and with whom she ends up, in the highly popular sitcom, Friends. Friends is an American TV series, a story about a bunch of 6 friends hanging out and living together in the same city. The show aired between 1994 and 2004, was created by David Crane and Marta Kauffman, and was directed by James Burrows. This sitcom captured that time of your life where your friends were your family. Its universal theme has had a mass appeal and soon this original sitcom became one of the best TV shows regaling us season after season.

Add in the dysfunctional characters you grow to love with and the hilarious jokes, you have then a show that everyone loves. The series ran for 10 seasons with 236 episodes and the series finale had viewing figures of over 50 million. This series was so addictive that the fans stopped referring the actors by their real names. The plot is about a group of six friends, all different personalities, how they fit in, and their curious way of life and friendship. A brief introduction to the characters: 1. Jennifer Aniston – Rachel Green, 2. Courteney Cox— Monica Geller (Ross’s younger sister), 3. Matt LeBlanc— Joey Tribbiani, 4. Matthew Perry—Chandler Bing, 5. Lisa Kudrow— Phoebe Buffay, 6. David Schwimmer— Ross Geller (Monica’s elder brother).

Who Is Monica Geller?

Monica Elizabeth Geller is one of the main characters in the television sitcom Friends (1994-2004 ), played to perfection by Courteney Cox. She is a motherly figure and her apartment is the Friend’s main meeting place. Monica Geller, with her unique pushy attitude, is fiercely competitive. She loves cooking and as the hostess, she is also a masterly chef to boot. Monica is the fulcrum or the main anchor as she is the younger sister of Ross Geller, who was best friends with Rachel Green in High school, also her childhood friend. She’s a friend for life, a woman who loves to compete, a daughter Of Jack Geller and Judy Geller.

Monica, a disciplinarian, preferred living in a neat place. She was all ears to any issues of her Friends, they considered her as a soulmate. Monica appreciated Phoebe Buffay, her roommate being nice to everyone. She was the chef of Friends for 10 Straight Years. Her magnanimous heart took in Rachel, her school friend when she needed a house. This eternal motivator was the bond that held the show together. Monica was organized, obsessively clean and at the same time an elegant, caring, practical Friend

Who Does Monica End Up With?

Monica Geller ended up with none other than Chandler Bing! Her love journey with chandler is easily the most romantic of all the journeys in Friends. Monica and Chandler, also known as Mondler shared a huge screen time with each other discussing matters which only parents discuss. She and Chandler seem to be always living in a symbiotic relationship, more than just being a friend and always reminding Monica that she is beautiful and caring, and also tries to convince her to be his soulmate, partner, and friend for life.

Monica and Chandler, the eternal love birds, are always together and reminding her that she is different, unselfish and also tries to convince her to be his girlfriend. Their love story begins at the end of the 4th season. Chandler, Monica, Joey go to London to attend their dearest friend Ross’s wedding. Here Chandler confides to Monica that she is the most beautiful woman he has ever seen and proposes to her.  Mature and committed to their relationship, they were transparent and never hid or played games. After Season 7, Episode 23, Monica gets married to Chandler. His love for her was so great that even though she could not fulfill her desire of having a baby, he adopted a child and made her a mother without a baby.

The Other Relationships & What happened to The Friends?

While Monica ended up with Chandler, Ross had a pretty tough ride from the starting of the season with Rachel. Their love story grew much before Chandler & Monica’s but it took almost 10 years for Ross and Rachel to truly confess their love to each other. Then even had a baby of their own. Joey was meant to end up with Phoebe but they remained single till the end of the show, even though they truly admired each other. Friends ran from 1994-2004 and it is one of the greatest sitcoms ever made. Netflix still ranks it in the top 10. Recently, in 2021, the whole Friends lead cast had a reunion. The official Reunion Trailer was posted 3 Months back and has accumulated over 6 million views! It is hosted by James Corden and executive produced by the co-creators. No matter how old they get, but the love for Friends “will always be there from us”.

Samantha Cope’s Boyfriend: All About Her New Date