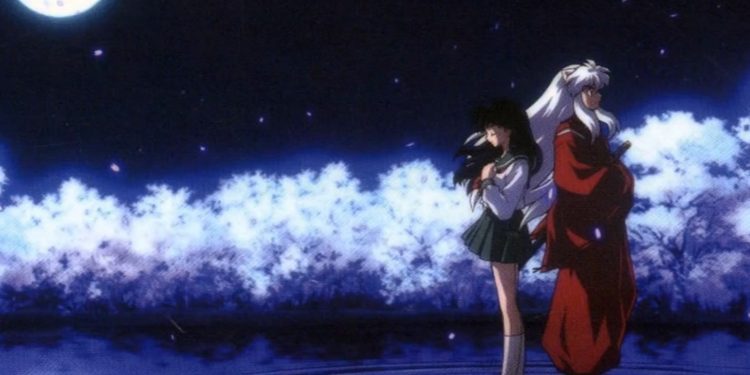 The series’s main characters are well defined as the plot directs us into unexpected situations. Inuyasha revolves around the main protagonist Inuyasha who is a half-human half-demon. The story begins with another main character, Kagome Higurashi, a middle school girl. She got transported from the Modern Era to the Feudal Era after she fell into her family shrine. After meeting with Inuyasha, she helps him to restore Shikon Jewel.

Inuyasha manga series has a total of 56 volumes, and the anime series has Inuyasha (2000-2004), Inuyasha: The Final Act (2009-2010), and Yashahime: Princess Half-Demon (2020). Inuyasha is one of the fan-favorite series and is still one of the best anime series of all time. After the success of the manga series, Inuyasha got an anime adaptation in 2000. Inuyasha covers almost all kinds of anime fans because of its vast range of characterization.

Inuyasha ends up with Kagome Higurashi. This happens during Inuyasha Final Arc when Kagome returns to the modern era and spends three years before returning to the Feudal Era because she got reincarnated in the Feudal Era when she was just 15 years old.

Inuyasha and Kagome Higurashi are not only the main protagonists of the series but also the best character of all time. It is difficult to maintain a relationship even when you are facing problems. But in the case of Inuyasha and Kagome’s relationship, it maintains easily without any problem because of their understanding toward each other. Their bonding is not an ordinary type which you can break easily because with time it grows more and more.

They have strong feelings for each other. They look like children, but in reality, they are more mature than adults. Their understanding, feelings, bonding, and protective nature towards each other make them perfect for each other. It is also shown by Inuyasha that Kagome is the main source of his unlimited strength, and without her, he becomes weak. And because of Kagome, he becomes a caring and kind person. It is difficult to put a specific word to define their love. Because it’s unbeatable and unbreakable, they love each other, and the purity in their feeling is so bright.

Kagome Higurashi is not his first love. Inuyasha’s first love is Kikyo, who was a powerful priestess. After betrayal, Inuyasha hates Kikyo. And this is also one of the main reasons behind hating Kagome when they first met. She looked the same as Kikyo. Inuyasha’s second love is Kagome, who always cares about him. The reason behind Kikyo’s death is her love for Inuyasha. Because she wanted to protect him, and she is kind of a woman who does not like to express much about her feelings.

Where can you watch Inuyasha?

After knowing about Inuyasha and Kagome Higurashi and their relationship, you might want to watch the anime series Inuyasha. For this, you can use Crunchyroll, Hulu, Muse Asia, and FUNimation. All these streaming platforms are legal and you can get access to other anime, too if you use your mail id for subscription purposes. The subscription on their platform is an important step to being able to watch all the episodes of Inuyasha.