Who are Upper Moon 6? What are their powers and abilities? Who is the strongest of them? 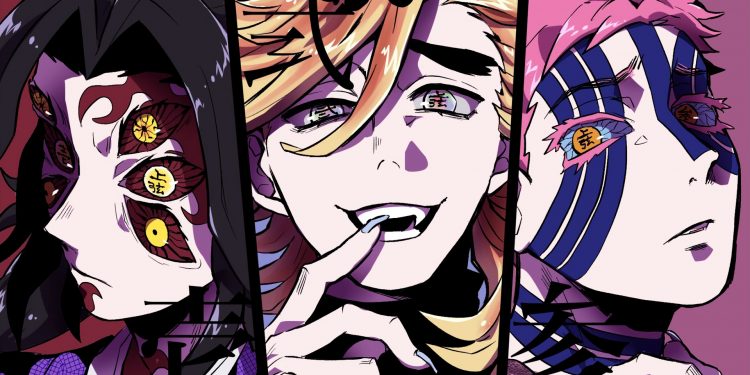 In a world where katanas are the most reliable weapon for self-defense, encountering a demon is undoubtedly terrifying, especially if it belongs to the 12 Kizuki. It is the organization of the 12 strongest demons who are directly under the command of the demon kingpin, Muzan Kibutsuji. Even such an overpowered organization was divided into the upper six moons and the lower six moons. We aren’t concerned about the Lower Moons since most of them were devoured by Muzan before getting an opportunity to shine. Rather, we have ranked the Six Upper Moon Demons, who have been a perennial problem for the Hashiras for centuries.

As a display of their strength, the last Upper Moon died before Gyutaro was about 113 years ago. On the other hand, the Lower Moon demons were replaced countless times because of their inferiority. After realizing the ineffectiveness of the Lower Moons, Muzan decided to dispose of all of them and relied on the Upper Moons to crush the Demon Slayer corps. However, not all the Upper moons have equal strengths, and some of them could use breathing techniques and even outclass the likes of Hashiras in it.

Despite being an Upper Moon 6, Daki wasn’t much of a threat to Sound Hashira Tengen Uzui. He sliced off her head like it was no big deal; even Inosuke’s chipped sword was enough to behead her. I doubt if she would have become an Upper Moon without the assistance of Gyutaro. After Daki and Gyutaro were killed, Muzan stated that Daki was the hindrance that caused the death of the first Upper Moon in 113 years.

Then again, killing seven Hashiras in her lifespan is more than enough accomplishment to claim herself useful. She could manifest her body into an indestructible Obi that not even the toughest nichirin swords can slice easily. What makes her even more invincible is the fact that beheading her isn’t enough to defeat her. She shared a psychic connection with her brother, Gyutaro, and they could only be killed if both of their heads were sliced off at the same time.

Kaigaiku is the Upper Moon 6 who replaced Gyutaro and Daki sometime during the Hashira training arc. He used to be Zenitsu’s senior under the former Thunder Hashira, Jigoro Kuwajima. Despite being superior to Zenitsu in every way, he despised Zenitsu for being their teacher’s favorite. He lashed out in hatred when he found out that Grandpa Jigoro was planning to make both of them his successor. This profound hatred grew over time till he encountered the Upper Moon 1, Kokushibo, who offered him to turn into a demon.

He never regretted turning into a demon since he always wanted recognition he thought he lacked. Even worse, his greed for power turned into a thirst for human blood, and he quickly climbed up in the ranks of demons. With his ability to thunder breath, he was certainly stronger than Daki. He combined his electrokinetic Blood Demon Art with his thunder breathing in a way no one else could have thought of. Only if he had mastered the first form of Thunder breathing carefully, he wouldn’t have lost to Zenitsu.

Gyutaro is the ruthless demon who dwelled in the darkness of the Entertainment District and kept protecting Daki like an unshakable pillar. He killed almost 15 Hashira’s in his demonic lifespan and was the primary reason behind Tengen Uzui’s early retirement. As a human, he was always looked down upon and hated just for existing. However, his endurance limit shattered when the cruel world took away his precious sister. A samurai burnt Daki alive for stabbing his eye with a comb. Doma found helpless Gyutaro with her sister’s half-dead body when he turned them into demons.

Gyutaro used a deadly pair of sickles as his weapons and could boomerang them in every direction with his Blood Demon Art of Flying Blood Sickles. In addition to that, those sickles were dipped in poison that could kill a human with the slightest cut. Even Tengen’s poison-resistant body started getting slower as the fight went on.

Gyokko is the demon with the most bizarre appearance and also the demon whom we know the least about. He raided the Swordsmith village and was almost successful in annihilating it. With his ability to teleport from one vessel to another, he was extremely hard to catch. Thanks to his obsession with fishes, he could summon fish-like demons and unavoidable spine-throwing fishes. He even trapped Mist Hashira, Muichiro Tokito, into a water prison and almost choked him to death.

Nakime is the demon behind establishing the Infinity Castle that gave the demons the upper hand in the final showdown. She has been around Muzan for a long time, and she replaced Hantengu as the Upper Moon 4 after his death. With her unique ability to completely change the area around her, she is undoubtedly the most annoying demon to deal with. She stalled two of the strongest Hashiras like it was some child’s play. However, she’s fragile when it comes to brute strength and endurance.

Hantengu is the original Upper Moon 4, who raided the Swordsmith village with Gyokko. He initially seemed weak but turned out to be the more problematic one. His specialty is to split into different demons after getting cut. The demon slayers were late at recognizing his powers and went on slicing them only to find themselves surrounded by four more demons. The worst part is, not even chopping their head off would kill them since the actual body was somewhere else. Thanks to Tanjiro’s enhanced sense of smell, he successfully detected his sixth body where his life force resided.

Also Read: Significance of ‘Hanafuda Earrings’: Why Was Muzan Scared of Tanjiro?

Akaza was the overpowered demon who brought upon a gruesome death on Flame Hashira Kyojirou Rengoku. Little did we know that we would mourn for the same demon later on in the series. In his teenage days as a human, he used to steal money for his father’s treatment. After a certain point, his father couldn’t bear the guilt of thriving on stolen money and committed suicide. He tried starting a new life with his master and her daughter, Koyuki, but that too was taken away from him.

As a result, Akaza grew this psychological need to grow stronger in order to protect the ones he cared for. Even before he met Muzan, he was considered a demon for slaughtering people with his bare hands. The demonification just nourished his hatred to a new level and diminished any remanent trait of humanity in him. The secret behind his accurate reflex is his ability to sense someone’s battle spirit. He held his ground even after getting his head chopped off, and Tomioka and Tanjiro could never have defeated him if he hadn’t volunteered his death.

Doma is the demon for whom none of us have a shred of regret. He was the senseless manic who enjoyed devouring his prey, especially if it was a young female. He is extremely polite while talking but becomes far more violent while fighting. Moreover, he himself claimed that even someone as strong as Akaza had no chance of beating him in a fair fight.

Doma is excessively apathetic, and for years he acted as the god’s messenger in a temple and kept devouring his female devotees. His Blood Demon art is pretty unique and can freeze anything in its way. He can emit chilled air that makes breathing very difficult. In desperate situations, he can create an enormous Bodhisattva statue that freezes anything within its range. It’s only because of Shinobu’s poisons that Kanao and Inosuke were able to kill him.

Kokushibo was the final hurdle that the Hashiras had to deal with before reaching Muzan. You can call him the demon whom Muzan believed the most. As a human, he was a demon slayer corps from the Senkgoku era and the brother of Yoriichi Tsugikuni, the first user of Sun breathing. From his very childhood days, he despised his brother for being the superior one. He even left his family to join the demon slayer corps, hoping that he would surpass his brother someday. However, with the appearance of the Demon slayer mark, he had a few more years to live, and he agreed to become a demon to extend his lifespan and perfect his Moon breathing technique.

In his centuries-long lifespan, he perfected sixteen forms of Moon breathing and combined them with his Blood Demon art of shooting moon-shaped projectiles. Moreover, his katana was made from his own flesh, and he could extend it according to his wish. Despite having everything, he was overpowered by the flame of retribution that was set by Yoriichi centuries ago. In his dying moments, he realized how futile his life was and could never become the ‘perfect man’ that his brother was.