Who Are The Best Pyro Characters So Far In Genshin Impact?

Check out all the Pyro Characters from worst to best in terms of power, popularity and abilities. 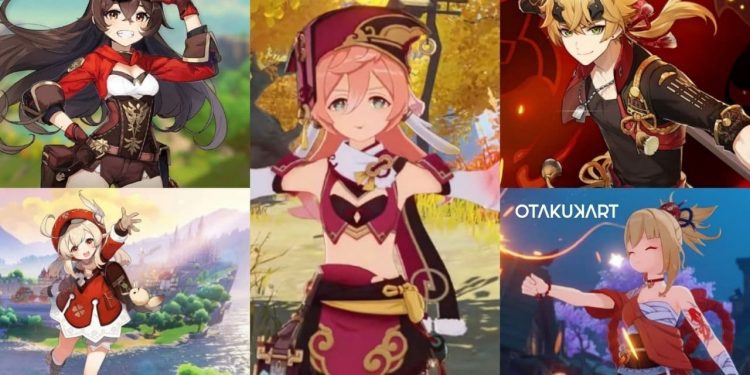 Genshin Impact allows its players to choose among certain characters so that they can make a strong team and explore the game better. The best pyro characters can add extra qualities to the group, and these pyro ones are most preferred because of their power. Well, there are seven elements in Genshin Impact, and every character has a unique element. These seven elements are Pyro, Geo, Dendro, Cryo, Electro, Anemo, and Hydro.

Also, these elements can be combined with others to extend the power and the energy produced. Interestingly, Pyro is the only element that can be combined with all the other elements to give the best result. So, if this element is so powerful and unique, then we must know the best pyro characters. Read on to know the best pyro characters from worst to best so that you can choose the best ones for your team.

A pyro character we know, Xinyan, is an amazing Claymore singer of Rock n Roll. She lies under 4-star, but if you are pairing it with Eula then you won’t regret it. That is because the duo is a beast when it comes to attacking and damaging the opponent. Moreover, the best build for Xinyan should be the Song of Broken Pines as a weapon.

Also, bloodstained chivalry or Martial artists should be the best Artifacts for the claymore character. If we talk about its abilities, her dance on fire, Sweeping Fervour (elemental skill), and Riff Revolution (Elemental Burst) can easily put this character on the list of best Pyro Characters. But, as more characters are much better than this one, Xinyan has to be on no. 10.

Next on the list is a Pyro Chef. Mao Xiangling, aka Xiangling, is a head chef at her father’s restaurant. Both of them work there together, and they love to experiment with dishes. But, Xinagling is more creative than her father. Also, when it is time for a showdown with her teammates, she works terrific when Noelle is on her left.

Further, Xiangling’s best build in terms of weapons should be Engulfing Lightning, and the best Artifact for her should be Emblem of Severed Fate. Also, she is free that means none of the Genshin Impact players has to pay for this chef. But, the player must be at least at level 20 if they want this character in their inventory.

Bennett is a 4-star humble and gentle Pyro swordsman who can be strong when it comes to defeating an opponent. Well, he is an orphan who lives in Mondstadt, and he was picked up by an adventurer. He can be obtained by spending wishes, and another method is Paimon’s Bargains. His constellation is Rota Calamitas.

Amber is yet another very humble and gentle character. She is such a girl who is ever ready to help anyone in her region. Be it a small task or a big challenging one, she is all set to help and solve every problem. Also, she is the Outrider of Knights of Favonius. She is a playable 4-star pyro character with a bow as her main weapon.

Her constellations are Lepus and Story Quest Chapter. Also, she can be obtained for free only if a player can complete challenges in Winds of the Past. Furthermore, she was released on September 28, 2020, and she is best beside Razor, an electro character.

Thoma is next on the list of best pyro characters. He is a 4-star pyro character who is a polearm user. Hailing from Mondstadt, he is the smartest fixer in Inazuma. Also, he is a part of Yashiro where he is in the Kamisato clan as a housekeeper. Now, talking about his constellation, he has Rubeum Scutum.

Also, the best build of the character is three-star Black Tassel as the best weapon for him, and the Staff of Homa can also be the best choice if a player does not want a high base attack. Furthermore, he was launched on November 2, 2021, and he was available in Genshin Impact 2.3 update.

Yanfei is the next one on the list of best pyro characters. She is a 4 star Pyro Character with Catalyst as her main weapon. Her Adeptus father and human mother left her when she grew a little. The reason was that they wanted to go for an adventure, so they left Yanfei with Madame Ping.

Now, she is an advisor for the people of Liyue, and everyone loves her because of her smartness and beautiful nature. Furthermore, her best constellation is Bestia Lustitia. She was also added in Genshin Impact 2.3, whereas she was launched back in April 2021.

Also Read: Genshin Impact: Xiao, Ganyu and Zhongli Rerun, When Will it Happen?

Naganohara Yoimiya, aka Yoimiya, is a 5 star Pyro character with a bow as her main weapon. She is the most loved personality on Narukami Island. Well, she has a company of her father that is Naganohara Ryuunosuke, where she is the owner. Her creativity, colorful fireworks, and friendly nature gather everyone.

Also, people of this island believe that Yoimiya should be at the island when it’s summer. Otherwise, the area comes off dull. She generally becomes the main DPS of her team as her power remains more than others. Thundering Pulse should be the best weapon for her and a 4-piece set of Shimenawa’s Reminiscence, the Best Artifact.

Klee is the third character who is the best among others on the list of best pyro characters. Well, she was launched on October 20, 2020, but her birthday is on July 27. This Pyro character is a 5-star personality with Catalyst as her main weapon. Her constellations are Trifolium and Story Quest Chapter. Hailing from Mondstadt, she lives with her intrepid mother, Alice, who is quite a destructive adventurer.

Also, this Pyro character, Klee, a part of Knights of Favonius, is no less than her mother. Talking about her best builds, Crimson Witch of Flames is the best Artifact, and Lost Prayer to the Sacred Winds is the best weapon for her.

Second on the list of best pyro characters is Deluc Ragnvindr or Diluc. He is a 5 star Pyro character with Claymore as the main weapon. He is a member of the Ragnvindr Clan, and he lives in Mondstadt. Well, he has very high admiration in that region among other people as he is the owner of Dawn Winery.

Earlier, he was a part of Knights of Favonius, but later, he had to leave it for some reason. Now, he protects and guards the region alone, and no one is there on his head to authorize him. He was released on September 28, 2020, but his birthday is on April 30.

Hu Tao is undoubtedly the best Pyro character so far. She is a 5-star Polearm character who is the 77th director of the Wangsheng Funeral Parlor. Hu Tao has a very playful nature. She loves to do pranks on people, especially on her best friend, because he is a cry baby. Her special dish is Ghostly March, and as you must have seen a ghost with her, she loves them.

Well, when she was a kid, she started learning about life after death, and her dedication took her to all answers for which she was restless. Her best build can be Staff of Homa, which increases her damage to a great extend.

What is Stars and Stripe’s Quirk? Quirk explained in BNHA