Devin Booker hails from the Land of the Lakes, Grand Rapids, Michigan. But before we delve deep into his biography, which we shall cover further down this article. Let’s start by stating that Devin has had a prolific career as an athlete since his high school and college basketball years with the Kentucky Wildcats at the NCAA and then moving on to the NBA draft back in 2015.

Who are Devin Booker’s Parents?

Here’s the truth about Devin Booker’s parents. This Phoenix Suns shooting guard was born to Verónica Gutiérrez and basketball international superstar Melvin Booker. What’s more, Booker played like a star point guard for the University of Missouri’s basketball team back in the 1990s. But Melvin Booker was never drafted into the National Basketball Association. Instead, he played pro with the Golden State Warriors, the Houston Rockets, and the Denver Nuggets. Also, Melvin Booker played abroad in the professional leagues of Asia and European basketball circuits.

Devin Booker’s mother, Verónica Gutiérrez, is a Latina woman of Mexican and Puerto Rican descent who works as a cosmetics distribution professional. Firstly, she met Melvin Booker in her Michigan hometown when Booker played for the Mackers (now defunct). Secondly, they got together and had little Devin. Verónica raised Devin in Grand Rapids while his dad played professional basketball domestically and abroad. Additionally, Devin Booker feels quite proud of his mother and his Latin American heritage. Melvin Booker and Veronica Gutiérrez never married. 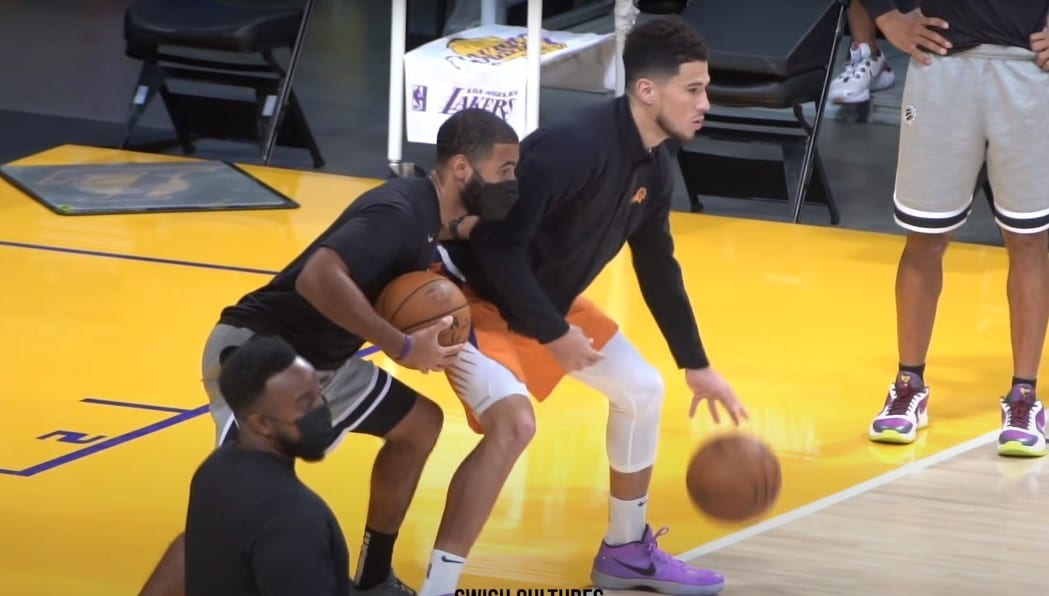 Who are Devin Booker’s Parents? – Otakukart

While growing up in Grand Rapids, all the way up in Michigan, Devin Booker didn’t have much time to connect with his Hispanic heritage. But once he got drafted into the National Basketball Association, he got a better grasp of Hispanic culture. Devin embraced it and loved it. Furthermore, living in Phoenix, Arizona, a city filled with Hispanics, he got to feel what the public experiences in the street with basketball culture.

Not only does rubbing elbows with Hispanics in Arizona made Devin Booker happy. But he also had the opportunity to strengthen his family ties and values. In the same vein, Devin Booker loves learning about Mexican traditions every day. But that Latina-mom heritage love wouldn’t be possible if his father didn’t chip in with some talent DNA and the right connections. Keep reading this article to learn about Devin’s entry into professional basketball.

Also Read: Who Is Trae Young Dating? About The NBA Player’s Girlfriend

When Devin Booker moved to Mississippi from Grand Rapids

Devin Booker played basketball during high school and moved from Michigan to Mississippi to live with his dad. At the time, he was a retired professional basketball player who had returned to America. In Mississippi, Melvin Booker worked as an assistant coach, and with the company of his father, he polished his skills not just by shooting some random hoops. In addition, Devin’s dad shunned a job opportunity in Europe to stay with his son. This proved to be influential in him.

As stated earlier, Devin’s parents never got married. Instead, they arranged a co-parenting system that allowed Melvin to work and travel while Verónica Gutiérrez raised little Devin. The arrangement consisted of summer visits. And Devin loved those visits, as he focused on playing basketball and learning his ways to the pro circuit. Devin Booker learned what he could from his father Melvin, who played in Italy, Turkey, and Russia, as well as the domestic pro circuit in America.

This Phoenix Suns basketball player currently holds an annual salary contract of US$20.6 million. And his estimated net worth is around $25 million. This successful basketball player of Hispanic heritage signed a 158 million dollar contract with his current team back in 2018, and he’s not planning on retiring nor transferring any time soon. Most importantly, his net worth is closely related to his statistics and numbers, as Devin has the record in his name of the youngest player to score more than sixty points in a match, a feat accomplished in 2017 when he was playing the Boston Celtics.

In conclusion, Devin Booker is a prolific basketball player with a giant net worth, Hispanic heritage, and basketball pedigree. To wrap things up, Devin Booker is romantically involved with fashion superstar Kendall Jenner.  His family supports him dearly and has a lot of talent in the court. So much that he managed to get a place for the United States Olympic Basketball team for the Tokyo 2021 Games that got postponed last year.