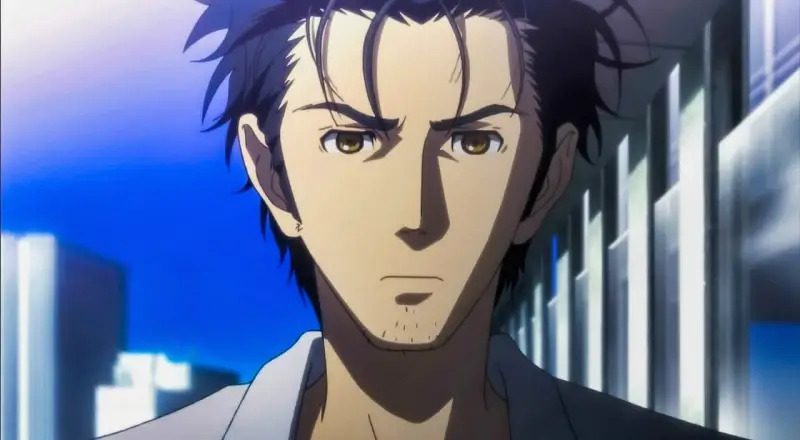 Okabe Rintarou attends Tokyo Denki University and calls himself the Crazy Mad Scientist. He is a character that acts as a villain while also showing the traits of Chuunibyou syndrome despite being a grown-up man. After enrolling in university, he opened a lab called the Future Gadget Research Establishment, where he invents things that have no use whatsoever. Okabe often talks to himself on the cellphone, giving no understanding to what he’s saying. He has very few friends who understand him. Sometimes, he refers to himself as “Hououin Kyouma.”. However, Mayuri and Daru just call him “Okarin,” abbreviating his name. Let’s find out which Anime Okabe Rintarou is from?

According to him, he and Itaru were friends for three years. However, Itaru claims the friendship is only a little over a year old. They are students at Tokyo Denki University, and he is an engineering student. As the first lab member, Rintaro established the “Future Gadget Laboratory,” which is a small research facility above a CRT store.

He named himself Mem 001. Rintaro formed a special bond when he was young with Shiina Mayuri – Lab Mem 002 and co-founder of the “Future Gadget Lab,” whom he loved and vowed to protect. Until he created PhoneWave (name subject to change) with Itaru, Rintaro led an ordinary life with a small group of friends. His parents own a business, and he once received an eggplant for Christmas.

Which Anime Is Okabe Rintarou From?

Okabe Rintarou is from Steins; Gate anime. He is the main protagonist of the Steins; Gate series and a self-declared mad scientist. The character Okabe Rintarou first appears in Steins; Gate (2009), a visual novel game developed by 5pb. and Nitroplus. Kabe is a self-proclaimed mad scientist who goes by the pseudonym Hououin Kyouma. As he experiments with time travel, he learns that he is the only one who can determine changes between different timelines, which he dubs “Reading Steiner”. 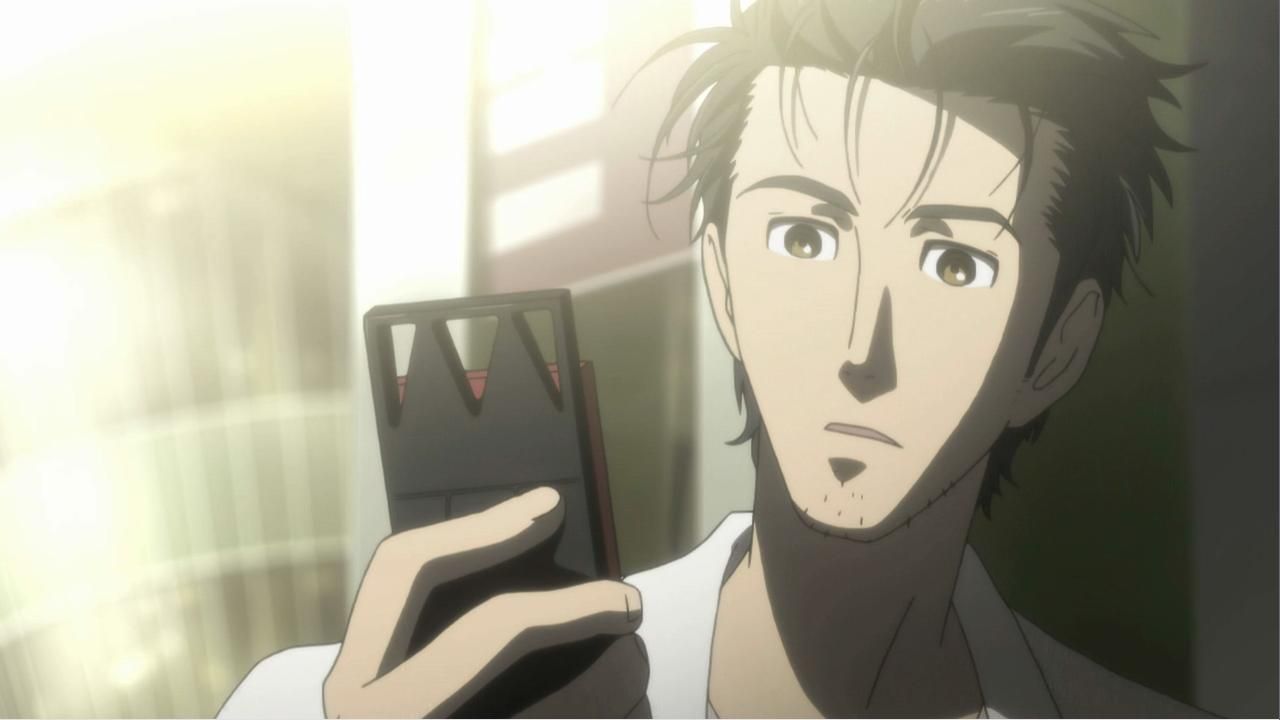 As he spends most of his time in Akihabara, he has dubbed himself Lab Member No.001 (as he is the first member of the lab). The character is voiced in Japanese by Mamoru Miyano and in English by J. Michael Tatum. He is a first-year student at Tokyo Denki University, and he is 18 years old.

In addition, Rintarou wears a lab coat over a simple shirt and slacks, although he also sports a square jaw and bony cheeks. His short black hair is swept back, and his eyes are brown. He also has some stubble on his chin. As compared to the anime, Rintarou in the game appeared more “dusty,” with his face looking pale and unshaven. He appeared to be less “clean” in comparison to the anime.

Okabe Rintarou’s character is melodramatic, eccentric, and rarely tsundere. He appoints himself the nickname “Kyouma Hououin” and uses it as an introduction to other people. Though he does not care for okarin (his nickname), most people address him by his name instead. Furthermore, he likes to pose as a member of a certain group of people he believes is always out to get him. This image gives him a cool, mysterious aura, though this appears to disappear as the story progresses, with SERN replacing that of the “Organization.” 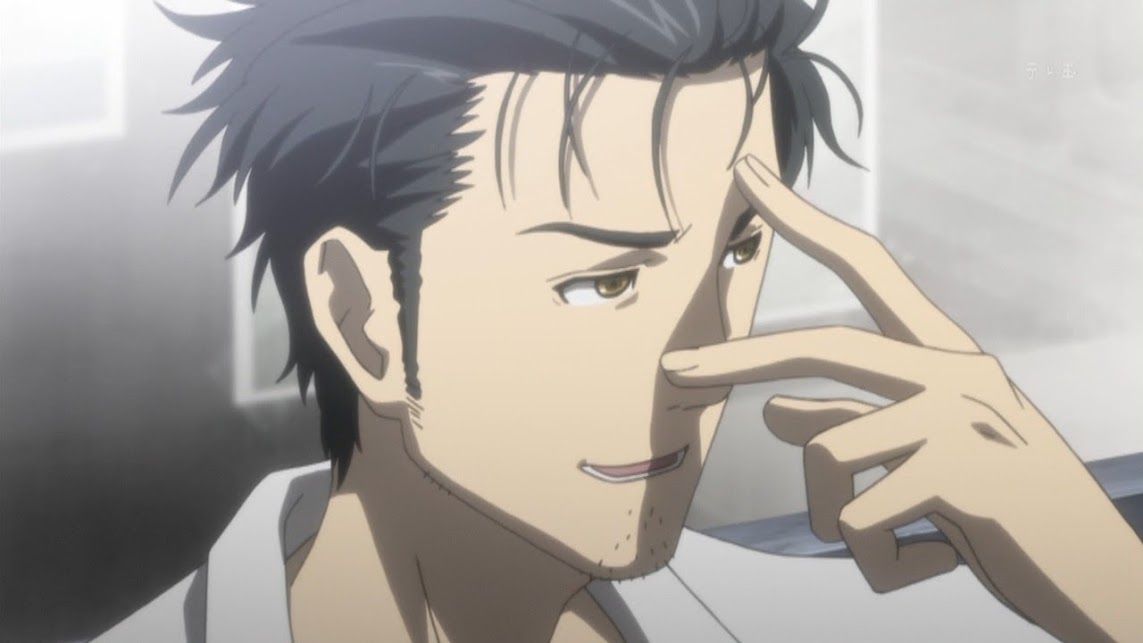 As seen at the start of the series, he gives the appearance that he has a bad case of Chuunibyou, sometimes talking to himself on the phone and having fits of maniacal laughter. This is a facade he wears for his childhood friend Mayuri to keep his life interesting. After the series’ first half, Rintarou initially appears to be rather arrogant, but it is later revealed that this is a result of his eccentricities and social awkwardness.

He then drops this facade when witnessing Mayuri’s multiple deaths, revealing an adult side to himself that he had not displayed for the first half of the series, as he works hard to obtain the IBN 5100 and prevent Mayuri’s death. While he has the aforementioned traits, he is a kind and caring person. This is particularly evident towards the end of the anime when he casts aside the facade that he has constructed to prevent the death of his friends. 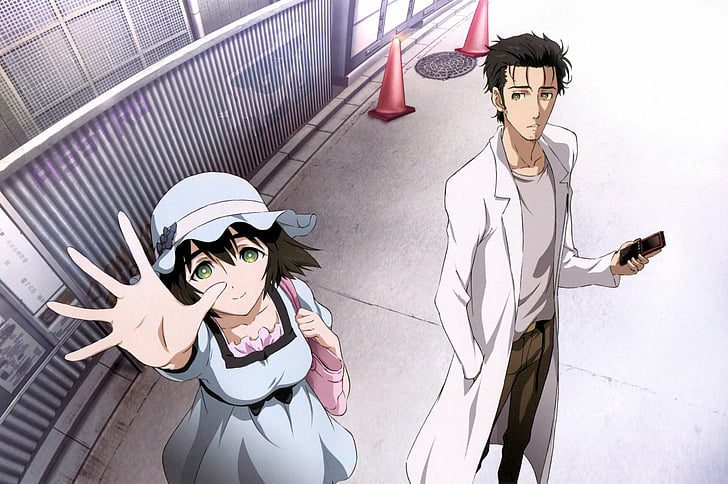 As a result of being forced to choose between saving Suzuha or Mayuri, Okabe’s personality became extremely warped and twisted. However, he quickly reverts to his old self when confronted by Suzuha. With time, he seems to develop feelings for Kurisu, along with Ruka, Faris, and Mayuri, because he falls for each of them in their respective stories, though he expresses his affection for Kurisu in the story regardless of his decisions.

Also Read: Yato God: Character Analysis: How Popular is He?

Where To Watch Steins; Gate?