Where Is ‘The Silent Sea’ Filmed? Filming Locations And Review

Netflix's thriller sci-fi 'The Silent Sea' leaves you in goosebumps with its thrilling plotline, outstanding acting, and stunning sights representing outer space beauty. But where is 'The Silent Sea' filmed that has captured such great views? 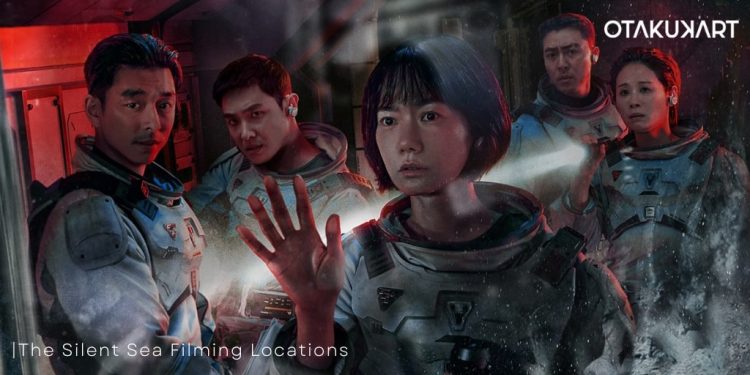 Netflix’s ‘The Silent Sea’ has been the talk of the town since its trailer was out. The Korean drama narrates the thrilling experience of a team of astronauts who depart to the moon to retrieve a mysterious sample, which may save the earth from its present catastrophes. With the murky replica of Seoul, the abandoned research station, and outer space views, many viewers wonder about the filming locations of ‘The Silent Sea.’ After all, those exquisite magnificence shots give a distinct and enigmatic look to the series, making it more intriguing to watch!

The Korean drama ‘The Silent Sea’ is based on the 2014 short film ‘The Sea of Tranquility,’ written and directed by Choi Hang Young, who also directed this series. The kdrama is written by Park Eun Kyo starring Bae Doona, Gong Yoo, Lee Joon, Kim Sun Yong, and Lee Moo Saeng. It was premiered on 24 December 2021. All eight episodes were released on the premiere day. When a team of astronauts travels to the moon to retrieve a confidential sample from the abandoned Bulhae Lunar Research Station, the hidden truth begins to surface. How will the team complete this mission when an unknown intruder is adamant about killing anyone who even touches that mysterious sample?

Also Read: Where Is Check Inn to Christmas Filming Location? All Location Revealed

‘The Silent Sea’ is a sci-fi thriller mystery revolving around a group of astronauts and their covert mission. The kdrama is set in the dystopian future where the earth goes through numerous environmental issues. Meanwhile, lack of water and food are the main concerns caused by desertification. Therefore, a team of specialists from different fields is formed. It consists of Doctor Song Ji An, an astrobiologist; Han Yoon Jae, the team leader; Lieutenant Ryo Tae Seok, a former elite member of the Ministry of National Defense; Dr. Dong Ga Young, Gong Soo Hyuk, Kim Sun, Lee Gi Su, E1, E2, Mr. Hwang.

The team is instructed to travel to the moon to complete a covert mission. The squad needs to retrieve a mysterious sample from the abandoned Bulhae Lunar Research Station. However, will they succeed when some of them have different goals to be a part of this secretive mission? How will the team complete the task when an unknown intruder hinders them?

Meet The Amazing Cast Of The Silent Sea

Review Of The Silent Sea- Watch It Or Skip It?

Although there are not many Korean sci-fi dramas featuring outer space, ‘The Silent Sea’ deserves a shot due to its thrilling enigmatic storyline. The initial episodes successfully catch viewers’ attention with their secretive mission and the mysterious sample content. Its suspenseful background music makes each scene more vivid, leaving anyone in goosebumps. Layer by layer, the drama folds the mysteries behind the Bulhae Lunar Research Station and what happened there five years ago.

Although the flow of the story is great in the beginning, the ending may leave some questions unanswered. There are some loopholes, or should we day the writer didn’t clarify those scenes. Still, ‘The Silent Sea’ is worth your time. The remarkable performances, filming locations delivering stunning views, and the spooky but thrilling story make the Korean drama ‘The Silent Sea’ more enjoyable! Thus, don’t forget to check it out on Netflix!

It’s surprising but, a large part of ‘The Silent Sea’ filming locations are in Seoul, the capital of South Korea. It is also one of the largest cities and well-known as part of the most active entertainment production house in Asia. As we know, Netflix’s ‘The Silen Sea’ has caught viewers’ attention with its thrilling sci-fi plotline featuring Bae Doona, Gong Yoo, Lee Joon, Kim Sun Young, and Lee Moo Saeng. However, behind the scene of ‘The Silent Sea’ has made fans more curious about its filming locations.

Although the series has shown different visuals of Seoul City, especially the Han River, the remaining part’s filming, such as the spacecraft and the Bulhae Lunar Research Station, are carried out in the well-equipped studio. Seoul is the hub for one of the busiest entertainment productions. And thus, it has various finest movie studios such as Dexter Studios, Seoul Film Studio Complex, Calltime Production, and many more. As for the outer earth experience, the production team uses LED walls which seems helpful to turn the scenes more realistic.

The cast members’ behind-the-scene photos reveal that they have been filmed in front of green and blue screens. In short, creating and filming sci-fi pieces is not an easy thing to do since detailed organizing and implementing complicated scenes require more attention. To show perfect shots of the despairing counterpart of Seoul, the sequence involving the Balhae Lunar Research Station and the spacecraft are done with the usage of special effects. After all, it is the production team’s hard work in delivering such stunning views of the gloomy Seoul replica, top-notch research center, outer-space segment, etc. Thus, don’t miss out on this thrilling sci-fi tale of ‘The Silent Sea’!

After Ever Happy: Release Date, Cast & Trailer – Here’s What We Know