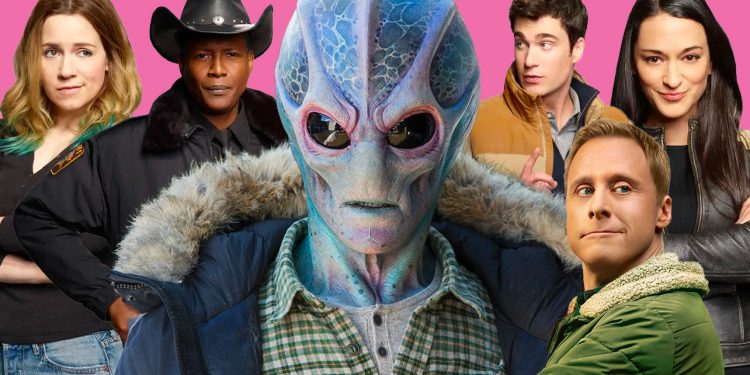 Resident Alien is an accumulation of admirable sincerity as it glimmers with the potential to be a show that’s as heartfelt and contemplative as dark and funny it is. As the viewers watched Resident Alien, they were always left wondering where the filming locations were located. The mystery and suspense locked into the energies of the show’s funnier side are enough to keep you curious about where Harry ends up. It all starts with an unknown being landing on an unknown planet and ends with all the mischief just to protect the true identity of being an alien. But as we say, there always is a needle in the pile of the heap, and hence the Alien’s true self is finally out.

An alien crashed on earth and, in order to protect his identity, tries to find the best place to hide. He, however, lands in the land of remote Colorado mountain town. The Alien comes up with the best way to hide while going ahead with his mission by taking up the identity of the town doctor. Little did he know that being a doctor would end him up in certain problems from where there is no turning back. And the mystery doesn’t end up here. The situation becomes more problematic when a tone boy is now able to recognize the true identity of the Alien. So let’s take a jump on the most important part and find out the place which was best suitable for the Alien to hide. Scroll down to find out Resident Alien filming locations.

Resident Alien is most prominently filmed in British Columbia. Specifically in the major part of Vancouver, Canada. Although the Colorado town of patience was built up for filming, the actual Resident Alien filming locations are in and around Vancouver. Several locations in British Columbia, such as Britannia Beach, Sea-to-Sky Corridor, Rainbow Mountain, and Pemberton Ice Cap, were also used. Although the filming locations look exactly real considering the perfect special effects, several shots were taken in the studio. On the outskirts of Vancouver, the studio scenes were taken in Sim Derwent studio. The outdoor filming of the series has a totally different location. The semi-rural town of Ladysmith on Vancouver island played a vital role in providing the perfect location for the filming.

Where Is Resident Alien Streaming?

Although Syfy’s Resident Alien can be found on many streaming apps, it is hard to find them all together. Most of the streamers won’t be providing the first eight episodes of the first season. However, the good news is that some of the episodes will be totally free and out of any subscription. The first five episodes of Resident Alien can be found on Peacock. Most of the WWE fans must be having an account on Peacock. The streamer is absolutely free and without any payment barriers. However, it is always recommended to get a subscription if you are not a fan of ads in between the suspense. Otherwise, feel free to signup and watch the free episodes.

If you wish to access all the episodes, then you must get your TV provider. Then the episodes can be accessed through the Syfy website or app. The episodes are also available in the on-demand library in the online streamers like Youtube, + Live TV, Fubo, and Hulu.

Is Resident Alien Streaming On Netflix?

The show is currently not on Netflix but is speculated to be streaming anytime soon. Considering the high demand for the series and the fact that Syfy is owned by NBC Universal, which also operates Peacock, the chances are really lofty. And just like the Syfy series Happy eventually ended up on the famous streamer, Resident Alien will make its way to Netflix too.

It is hard to believe that the town of Patience is all a set considering the spotless editing and originality maintained by the production. But no, the town of Patience, Colorado, is not a real town but just a set built up to look like it. To maintain the authenticity and originality of the town from the comic book Resident Alien, the production set up a town and locations just as mentioned in the book.

In addition to that, the town is not given the same name as in the comic, HaRe visits the town of Patience to become a residence, but in the series, the place is changed to the central state of Colorado.