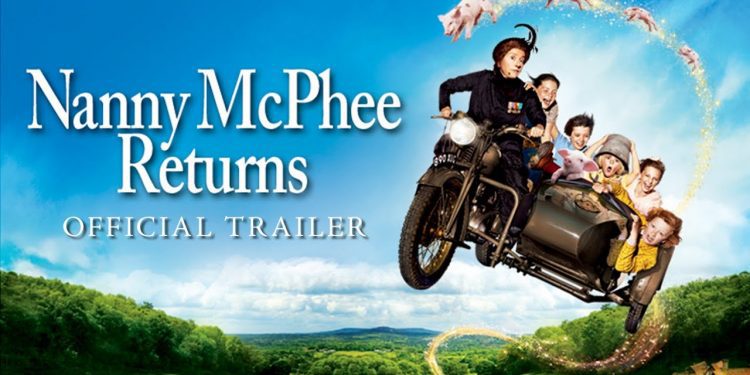 With a pinch of childhood comes a huge responsibility and the whole cast seems very indulged in whatever act they are given. Fans of Nanny McPhee will take pleasure in the big bang as well. The few unexpected cameos only added more fun to the plot. Most important was the obligatory ending which scored an emotional note. All the good work ends in the barley farm. So let’s find out where is the original Nanny Mcphee’s magically harvested barley found?

Nanny Mcphee and Big Bang is mainly filmed in London. Firstly, the village around which the whole movie revolves is in Hambleden in Buckinghamshire. The barley farm was a temporary set up for the shooting in Bramley, near Goldaming in Surrey. Some of the farm scenes were taken in Hascombe. The war office was actually the Senate House, University College of London, Malet Street, Bloomsbury, London. The adventurous bike scenes were filmed on several roads of London. but the specific flying bike scene was taken in park crescent, Marylebone, London, UK.

Also Read: What Are The Creatures in Hellbound & Their Significance?

The magical tale of Mcphee revolves around the mother who struggles through her hectic life in order to make out a living. She also has three tumultuous children Norman, Megsie, and Vincent to look after. Isabel Green, whose husband is serving the country by fighting in world war II, is taking care of the family farm and her job all by herself. A part of the chaotic life is also the slightly mad Mrs. Docherty who runs the village shop where Isabel works. While Isabel is working her fingers to bones to make her farm up and running, her kid’s wealthy cousins Cyril and Celia arrive to live with them. The kids weren’t a problem until they started a rebellion against each other. That was when Isabel needed childcare help.

When McPhee arrives, the children tried their best to shoo her away and the mess slightly increased in the house. Mcphee soon put end to all this with her magic spells. Meanwhile, Under Isabel’s nose, her brother-in-law Philgambled half of the farmland away. Phil is being chased by two female assassins who are hired by the casino owner Mrs. Biggles.

Whereas Phil is continuously pressurizing Isabel to sell the leftover part of the farm by using malicious techniques. The children on understanding his schemes, grouped up together to incite defiance against Phil. Isabel takes the children to a picnic where they meet ARP Warden, Mr.Dorchetry who informed them about the bombs and images that a pilot may accidentally drop a bomb.

Meanwhile, Phil is cooking something terrible in his mind and delivers a telegram that Rory died during wartime. But Norman is pretty sure that his father is not dead and something is wrong with this telegram. He tried to convince Cyril who had already believed the telegram. Later Cyril realizes Norman to be right. Together the two asked Mcphee to take them to the war office. The war office was in London where Cyril and Celia’s father, Lord Gray works. Norman and Cylia speculated about Lord Gray about Rory. At first, Lord Gray is found grinding at Norman’s disbelief at his father’s death. but he make sure to check the situation when Cyril started blabbering about his parent’s divorce.

Cyril told Norman that they were sent to them because their parents were splitting their ways. Norman asked the two to love the greens at the firm after the divorce too. Lord Gray told the two that Rory is not dead but is missing and there is no record of any telegram sent to the greens. As they were heading back, Norman speculated that Phil had forged the telegram.

Meanwhile, on the farms, the rest of the kids are trying to stop Isabel from signing the papers of land. When she’s about to do so, a german pilot drops a bomb in the barley field. The bomb didn’t blow off but turned everything upside down. Norman on reaching back accused Phil of the forgery and Phil accepted the charges.

With the help of kids and Mr.Dorchetry, the bomb was dismantled. Nanny McPhee helped to harvest the barley field with her magic and it is revealed that Mr. Dorchester is the baby Agatha who recognizes Nanny McPhee. As Nanny move away from the family, and with the arrival of Rory, the family is happy again.

Also read: Where is The Girl Before Filmed? Locations, Plot & Cast