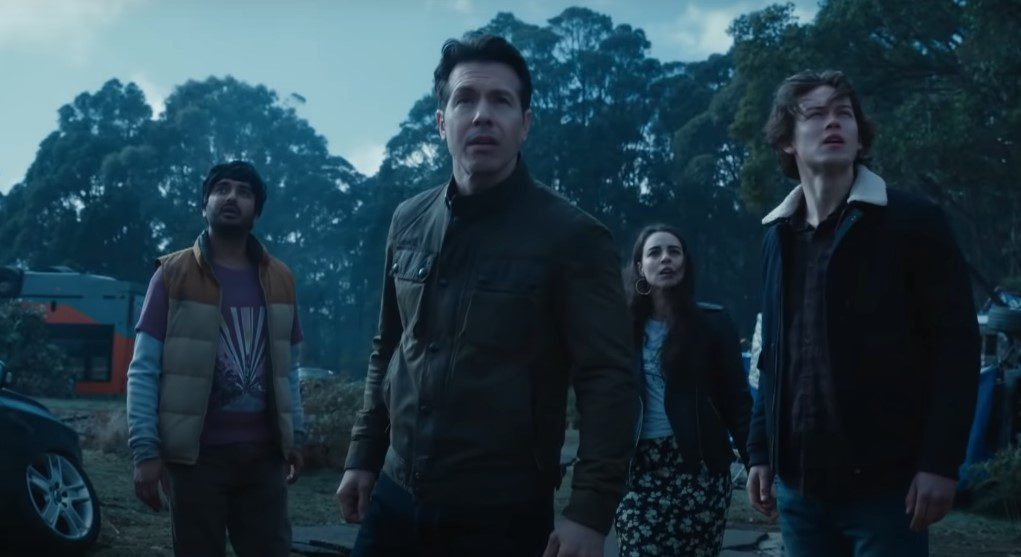 NBC’s latest drama series La Brea has many people wondering where is it filmed. In consequence, we will answer where are La Brea filming locations here at Otakukart. Firstly, if you’re not familiar with the La Brea plot. It’s about a massive sinkhole gaping in the middle of Los Ángeles, California, at the famous La Brea Tar Pits, pulling a bunch of people into the depths. The ones who fall in the sinkhole end up in a faraway land and must group up to survive.

La Brea is the work of TV veteran —David Appelbaum—, a man who created NCIS: New Orleans and The Mentalist. It stars Natalie Zea, in the lead along with Eoin Macken and Chiké Okonkwo. While the show takes place in Los Ángeles, California, our readership might be surprised when they learn where the photography for the series takes place. Moreover, the production counts with real animals on set, and if you’re familiar with the show, you know those are some primal vicious beasts. But more on that later, without further ado, let’s begin!

La Brea’s filming location wasn’t filmed anywhere in Los Ángeles, California, United States, but in Melbourne, Australia. That’s right, folks! Firstly, NBC chose Melbourne because of the incentives the city offers production companies for developing and creating content there. Moreover, that investment was a millionaire one for NBC, the studio made a $9 million deal with the Aussie government on one side. And made another sweetheart deal for $33 million on the other. With that kind of money, they turned Melbourne Streets into Wilshire Boulevard with no hassles. Just the proper editing and any place in Victoria will pass as your average LA street.

While in Melbourne, more specifically, the crew shot at Dockland Studios. But they also did some scenes at Coburg High School, the University of Melbourne at Parkville. Additional scenes were filmed in Greater Melbourne, specifically in Rye, a very famous tourist attraction. Moreover, some outdoor scenes took place at Mount Macedon and its surroundings. But you would never guess it’s Australia, thanks to the magic of editing. Good for the crew!

Also Read: Where Is American Rust Filmed? All About The Locations

The “La Brea” cast will also include Zyra Gorecki and Jack Martin as Izzy and Josh Harris, Claire and Gavin’s two children, in addition to Zea and Macken. Josh and his mom are trapped in the bizarre world beneath the sinkhole, while Izzy is above her father. The new series features a reasonably big cast, with newcomer Lily Santiago portraying Victoria, a character who lives a rigorous life to protect her younger sister, and Jon Seda of “Chicago P.D.” playing Dr. Sam Velez, a father with a teenage daughter who “carries himself like an Army general.”

According to the official description of NBC’s “The science fiction series “La Brea” is an “epic adventure” centered around a massive sinkhole near Los Angeles, as “those who fell in finding themselves in a strange and perilous primeval world, where they have no option but to band together to live.” Meanwhile, the rest of the world is frantically trying to figure out what occurred.” It seems that the show’s primary emphasis will be on the Harris family, depicting how they are separated and placed in two drastically different circumstances, but must work with those around them to be reunited.

There hasn’t been much disclosed about the world inside the sinkhole, but considering that it’s located on the La Brea Tar Pits site and is characterized in official language as “primeval,” it’s very probable that viewers will witness some Ice Age-era vegetation and animals. On top of that, there’s the huge issue of how this realm even exists underneath Los Angeles. Implying that there’s a deeper magical explanation for everything that happens in “La Brea”. NBC clearly believes in the new show’s potential. And has been relatively quiet about the first season’s plot. So start getting psyched and preparing for the September debut.

Squid Game: How Much is 45.6 Billion Won to USD; Netflix K-Drama Explained

Paul Hollywood’s Net worth: How Much Does He Earn?