Where Is Judge Steve Harvey Filmed? All About The Show And Filming Location! 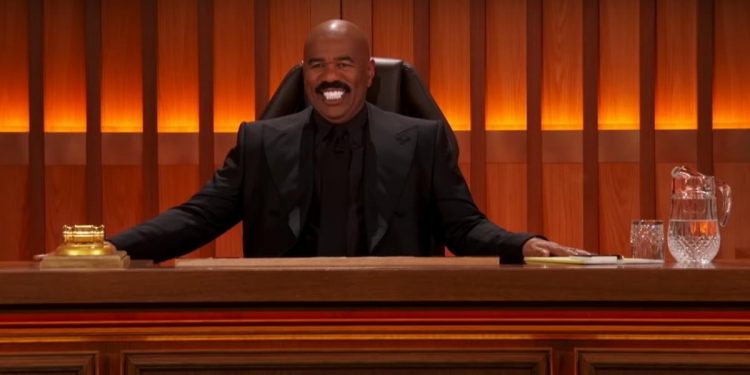 Steve Harvey on the show

The courtroom shown in the show looks legit, which has left viewers wondering where Judge Steve Harvey is filmed! We all know Steve Harvey for the great comedian that he is. Now, he is also a judge! In the show, he provides real solutions and settlements to the problems that are presented in front of him as cases. Steve also adds wit and humor to everything that he does which results in him having a hugely loyal fanbase!

While talking about the show, Steve said he knew he had to just be himself. He mentioned how most judges are interested in the law and factually bring solutions to the problems of people. For Steve, it is about digging up the story behind why people came to court and for what the other party is in court for. He talks about leaning on decades of experience he has, with all types of situations and people. Steve relies on his wit, common sense, and humor to get the show done. Now, is the courtroom shown in the show real? Let’s find out what the show is about and where Judge Steve Harvey is filmed!

What Is Judge Steve Harvey About?

The show Judge Steve Harvey has a runtime of an hour. It is an unscripted courtroom comedy series whose star is Steve Harvey. He serves as a judge and is himself on the jury too. Now, in his ‘courtroom’ people come to him with their life difficulties and problems. They present their cases that range from family disputes or feuds to unpaid bets to strained friendships and everything in between.

Steve Harvey is a very well-known comedian and TV host. The man is best known for his humor that is unique and intriguing. Steve has hosted a show called Family Feud as well as Celebrity Feud. He is a 64-year-old former radio star too! In the show ‘Judge Steve Harvey’ Steve listens to the people who come up to him with their problems and gives them his candid thoughts about the issues. In the end, Steve makes a final decision on a settlement that he believes is fair for both parties.

Is Steve Harvey A Real Lawyer?

With the show being on screens, viewers often wonder if Steve Harvey is actually a lawyer or judge? The plain and simple answer to it is ‘Nah’. In the States, before taking the LSAT (Law School Admissions Test), a person must have a B.A degree in order to preside over a real-life courtroom. They must pass the bar exam after graduating from law school and earning a Juris Doctor degree. After that, a person progresses through his skills and experiences as an attorney. Steve is not a real judge or lawyer but that has not stopped him from doing the show!

There are a lot of other judging shows like ‘The High Court with Doug Benson’ and ‘Chrissy’s Court’ that have been hosted by comedians. There have been shows like Judge Judy in which real-life judges host the show. Judge Steve Harvey’s judgments will most certainly be legally binding. In the show, regardless of whether Steve favors the plaintiff or defendant, it is a win-win situation for all. No one pays out of pocket. The show’s official website cites that all awards and judgments are paid by production.

Where Is Judge Steve Harvey Filmed?

The whole setup for the show is in Trilith Studios. It is in Fayetteville, Georgia. The community is 22 miles south of Atlanta. The destination is very popular for television and film production. The studios have teamed with Georgia Film Academy and The University of Georgia. The students of the Master of Fine Arts film program get an opportunity to work and live on-site in their second year.

The ‘Judge Steve Harvey’ courtroom set was painstakingly constructed in the well-equipped studio area, with bright and strategic lighting to accentuate its structure. The set is a beautiful depiction of a real courtroom. All of the components like spectator seating, the witness panel, and the judge’s seat have been designed to look incredibly real and convincing. Even the fictitious courtroom seems real. Steve Harvey strives to maintain the format as authentic as possible, attempting to understand the real reasons why the complainants have gone to court.

Also Read: Is Steve Harvey Getting A Divorce? Addressing All The Rumors