Where Is A Castle For Christmas Filmed? All Locations Explained 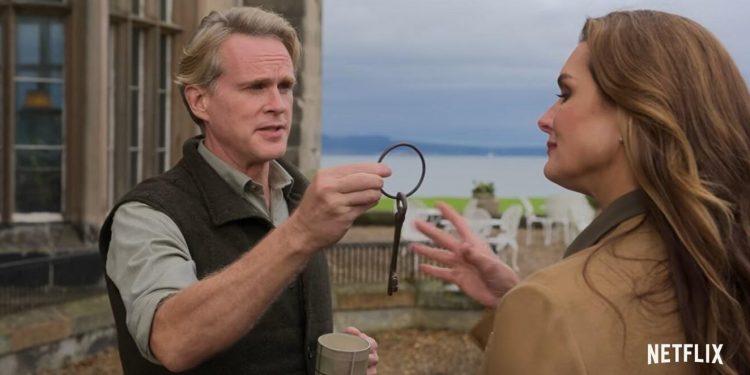 A Castle For Christmas is the most recent Christmas addition of Netflix. It is a Christmas Comedy directed by Mary Lambert. The main cast includes Cary Elwes, who plays the Duke & Brooke Shields, the author. A Castle For Christmas premiered on November 26, 2021. The locations of the film lure some portion of fantasy and lots of Christmas charm. Brooke Shields plays the role of the Duke, who owns a beautiful castle. The Castle’s name is Dun Dunbar, which is actually a Gothic Revival Mansion in Edinburgh. As we go deeper, we shall realize more about the filming locations of the Christmas Castle! Produced by Motion Pictures Of America, the film has a running time of 1 hr 38 mins. The Christmas film presents the famous song Celtic Heart, sung by Starsky & The Fox. The background music is composed by Jeff Rona.

A Castle For Christmas talks about a world-famous author Sophie Brown (Brooke). The American Best-selling author is famous for her unpleasant romantic novels! In order to win the Pulitzer, Sophie crosses the line. When you are very famous, you need to be consistent with your flow of words. Due to her greed, she killed a fictional character in her novel. It was a scandalous move as her fans started cursing her. The person whom she kicked off was her most cherished character. It is like if he brought her fame, he is capable of causing her shame! To get some quality time for herself, she runs away to Scotland. That is where Sophie encounters the Duke, who owns the Castle. So will Sophie write another Novel to get back her name? Before that, let’s check out the filming locations!

A Castle For Christmas: All The Production Locations Explained

The Critics gave mixed reviews to A Castle For Christmas. However, the film kicked off the Christmas trend in a beautiful fashion! The performance is worth watching as well. Brooke Shields and Cary Elwes will never coordinate together in a romance genre. The good thing is that this is what Mary Lambert needed for her Christmas project. So let’s carry on with all the beautiful scenarios that we witnessed in the film. The movie had assembled the cast and the production crew in Scotland. A Castle For Christmas only got filmed in Scotland due to many reasons. First of all, it was a low-budget film with less viewing time. Secondly, there would be no better place for Sophie Brown and the Duke. Myles is the Duke of Dun Dunbar Castle, while Sophie is coming of Scottish origin.

The entirety of A Castle For Christmas got filmed in Edinburgh, the capital of Scotland. The airport scene is in the Edinburgh Airport. It got situated on the southern shore of the Firth Of Forth. Edinburgh is well-known for its beautiful structure. The capital city has classy landscapes, a rich urban hood, and a number of monuments.

The primary picture-taking was in the estate of Dalmeny House. It is a Gothic revival mansion located in the South Queensferry, west of Edinburgh. The mansion was used to picture Dun Dunbar Castle of the Duke. William Wilkins is the brain behind the Gothic Revival Mansion. Most scenes of the film containing Brooke and Elwes are in the Dalmeny House. The Tantallon Castle is in East Lothian, Scotland. It is established south of Firth Of Forth. It is a ruined fortress built by the 1st Earl of Douglas, William Douglas.

Also Read: Where Is Christmas In Evergreen Filmed? All The Locations Explained

Plot Summarized: Brooke Shields & Elves, A Match Made In Scotland!

Sophie Brown is an American author of the best-selling Emma Gale novels. She has written 12 novels on that series, and all have been a success. In order to win the Pulitzer, Sophie ends the series by killing Winston, the most loved character. Sophie faces the wrath of the fans as it turns out to be a suicidal move. Claire, manager of Sophie, suggests her to write another book. It will cool down the fans, making up for the embarrassment. Drew Barrymore interviews Sophie. She had a verbal spat with him and decided to travel to Scotland. It is the place of her late father. When she was young, she used to listen to the tales of Dun Dunar castle. Sophie loves the Castle a lot, and it is owned by the Duke of the Castle.

The next day, Brown visits the Castle. She goes into a private room where she finds her late father’s work. He had engraved some items when he was young. Myles, the Duke, catches Sophie red-handed. He immediately asked her to leave. The next day, Sophie realizes that the Castle is on sale. Brown decides to buy the Castle, to respect her father’s memories. But the Duke won’t let that happen so easily. He tries his best to stop Sophie from buying it! Sophie has to deliver the new book before Christmas and get past the Duke as well. Will she be able to do it in time? That is where the comedy happens!

Also Read: Lucie Donlan’s Boyfriend: Who Is The American Model Dating in 2021?

Is Brittney Shipp Pregnant? All About The American Meteorologist