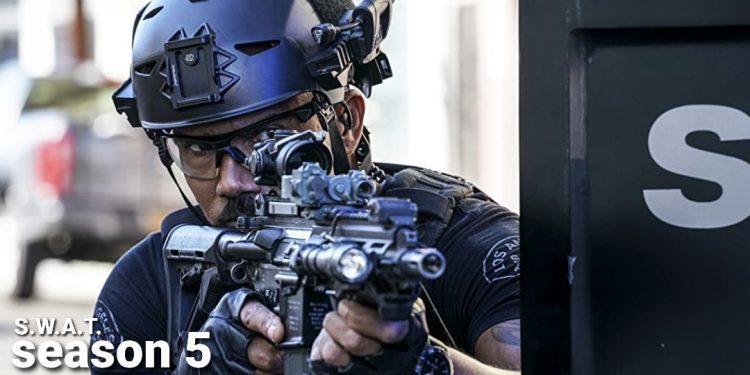 “S.W.A.T.” Season 5 Episode 9 will return after a Christmas hiatus, continuing afresh from the new year onwards. Although the promo for the upcoming episode stitches scenes from the previous episodes together and little from episode 9, we do have an official synopsis for what is to come. The team will deal with the cartel next time, with the cartel hell-bent on trying to kidnap their wealthy client. Billy Gierhart has directed the next episode, with a teleplay from Michael Gemballa. The episode is titled “Survive”.

Although the next episode will hit the TV screen in 2022, there’s plenty that has transpired so far that we can discuss and plenty that we can speculate about. While we may or may not get a new trailer for what’s to come, let’s delve into all that episode 9 of “S.W.A.T.” Season 5 will entail and what happened in the previous episode. Spoilers ahead!

Episode 9 of “S.W.A.T.” Season 5 will release on January 2, 2022. According to the official synopsis, Deacon and Chris will be facing some dire circumstances. Deacon will enlist Chris to help him on off-duty private security detail. However, the unexpected will happen when the drug cartel will attack them, to kidnap their rich client. The official promo gives a momentary peek at the mayhem and the chases to come.

Episode 9 of “S.W.A.T.” season 5 will air on CBS on Sunday, January 2, 2022, at 10:00 pm ET/PT. You can watch the episode online via live and on-demand Paramount+. Viewers can also stream S.W.A.T. season 5 online on CBS’s official website. There’s also the alternative of catching it via live TV services like Hulu+Live TV, DirecTV, YouTube TV, and Fubo TV. Additionally, you can also buy or rent S.W.A.T. episodes on iTunes, Amazon Instant Video, VUDU, and Google Play.

Episode 8 opens with Nichelle and Hondo who’re moving forward with their relationship and becoming more familiar. Hondo introduces Nichelle to his mother. Now her mother is a wholesome and sweet woman. However, her dreams of seeing her son parent a child make things rather awkward. Nichelle and Hondo are not yet ready to have that call. His mother, however, really does want to be able to see her grandchild before she dies. She mentions it over dinner with Nichelle and later at the ending to Hondo as well. She believes Hondo won’t turn out like his father and become a great parent.

Anyway, in the middle of the dinner, Hondo receives a call from work and sets off. The new case involves an armed man wreaking havoc in a liquor store. The team gets there and subdues the armed man successfully. Meanwhile, the store owner is injured and is given medical treatment. He tells them that it all started when a young Spanish woman rushed inside the store with apparent fear on her face. She was running from someone and tried hiding in the bathroom. However, the men arrived looking for her, grabbed her, and took her away. The man that the team arrested doesn’t turn out to be much help since he doesn’t open his mouth.

An Immigrant Girl & A New Gang

After trying to get intel from the man and not breaking through at all, the team turns to technology. They try facial recognition to find the girl but it doesn’t yield results either. They try scouring the databases to look for her but she’s not in any, since she’s undocumented. However, the team receives great help because of Luca. His social standing in the local community comes in handy when some person approaches her regarding the kidnapping. The intel the team receives from that involves the girl’s name — Jenni Moreno. She’s an immigrant from Honduras and has been living in a house for immigrant women like her. A woman called Mama Pena owns and runs the house.

The team interrogates Mama Pena and she tells them this is not the first time Jenni was kidnapped by a gang. She tells them that a gang back in Honduras had coerced her to act as their drug mule. However, Jenni escaped that and migrated to the USA, in hopes of starting a new life. The team investigates the gang and finds out several details about them. The gang is a new one and the leader is trying to grow and establish his name. What puts Jenni’s life in danger, even more, is that she fled the gang with their drugs.

Some gang mGardembers come back to Mama Pena’s house to look for something. Chris and Luca contain and detain them, though. Deacon is heated up and tells Mama Pena off for not letting them interrogate the girls. However, she doesn’t want the girls to be scared. Mama Pena then tells them about a bag. Soon, Victor and Luca confront Marcos Guzman with the same backpack that has drugs in it. They bring him in and he tells them he made a deal with the gang — drugs in exchange for Jenni. He also proposes they let him go and save her, with them being undercover. They do that, but an unexpected development ruins the plan. The ICE members sabotage the scene when Marcos confronts Ignacio.

However, the team does eventually manage to subdue Ignacio and his gang. With Chris’s fighting skills, the gang leader is defeated. Jenni is reunited with Mama Pena and others. Luca thanks Marcos for helping out in the case and we see the mutual recognition and respect. The episode ends with Hondo sharing heartwarming moments with Nichelle and his mother.