Good Sam Episode 13 arrives this week with the first (and potentially the only) Season concluding its run. The promotional material for the finale teases some upheaval occurring in the relationship at the center of the plot. There’s a bit more than the promo and previews tease, but we’ll delve into all those shortly. Before that, however, let’s go through what the previous Episode was all about.

In Episode 12, we saw Sam, Griff, and Vivian face the fallout from Griff’s bombshell confession to the hospital board. Meanwhile, Sam and the surgical team prepare for what will be the defining work that can take Sam’s career to new heights. However, the surgery is a high-profile, meticulous piece of work that requires extreme dexterity and discipline. In the next Episode, Sam will receive the good news she awaits after the crucial procedure turns out to be a success.

However, another bad news awaits her, which could change her dynamic with Griff forever. Let’s discuss that and more below. Proceed at your own discretion, for spoilers lie ahead!

Good Sam Episode 13 will air on CBS, Wednesday at 10:00 pm ET. New episodes air on the cable network every Wednesday, as well as drop online on various platforms. You can watch the finale online via Paramount+, YouTube TV, and Amazon Prime Video. In Canada, the medical drama is available to watch via Global TV. New Zealand viewers can watch the show on TVNZ, and in India, the show is available online via the Voot streaming service.

Is there a Trailer for the Final Episode?

Good Sam Episode 13 will release on May 4, 2022. The official synopsis for the upcoming Good Sam Episode reads, “The battle between Sam and Griff takes a shocking turn that will irrevocably change their family dynamic and the future of the hospital.” Titled “To Whom It May Concern,” the Episode is directed by Craig Siebels, with the teleplay from Jen Klein. With the Episode concluding the Season, fans are wondering if the show will return for a sophomore installment. However, there hasn’t been any official word or announcement regarding the same. What fans are also wondering is what exactly is happening in the finale. From all that we see in the promo, it seems that Griff is relapsing into his old habits.

For a while, he and Sam seemed to hit it off, and the relationship was turning a new leaf. However, it seems that those developments will face some regression in the upcoming Episode. Sam is reaching for, in the wake of a successful groundbreaking surgery, the position of Chief of Cardiothoracic. However, Griff has reverted to how he was at the beginning of the Season. In the process, he seems to have she’d all the positive character development he exhibited. The finale will see the family dynamic between the father and the daughter turn sour again. What will happen next, and will Griff give up his old ways and let his daughter fly high without being an egotistical saboteur? These are the questions we will get answers to when the show returns on air this Wednesday.

Also Read: Where Is ‘Good Sam’ Filmed? Where is the Hospital Located? 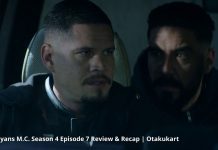