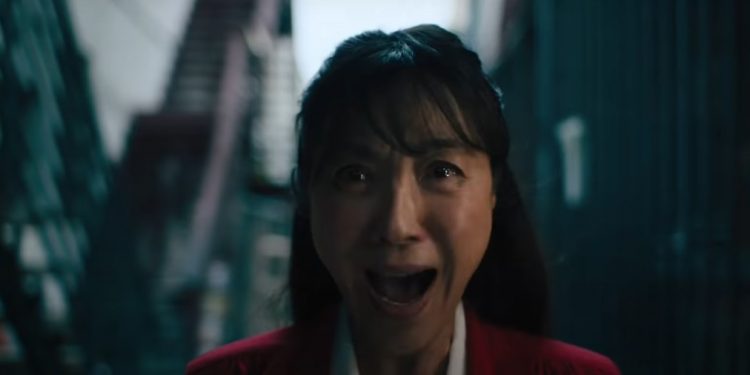 Everything Everywhere All At Once Release Date

The Daniels (Kwan and Scheinert) bring us a new movie. When is the Everything Everywhere All At Once release date? Firstly, this movie stars Michelle Yeoh, Ken Huy Quan, and Jamie Lee Curtis. Secondly, this movie tells the story of an Asian woman with trouble with her taxes. But that’s only a part of it. Because Yeoh’s character also lives multiple lives in different parallel universes.

A24 is the production company behind this movie. Additionally, A24, based in New York City, is responsible for successful movies like the Academy Award-winning films “Moonlight,” Brie Larson’s “Room,” “Amy” —a documentary on the life of the late Amy Winehouse— and “Ex Machina,” that won an Oscar for Best Visual Effects. Now without any further ado, let’s begin taking an initial look at this science-fiction film here at Otakukart.

Everything Everywhere All At Once Release Date

Everything Everywhere All At Once will release on March 25, 2022, in theaters in the United States. Firstly, A24 distributes this movie, which runs at 146 minutes. Secondly, Everything Everywhere All At Once is directed by Daniel Kwan and Daniel Scheinert out a script they wrote. Additionally, “the Daniels,” as the directing duo is called, is also credited with movies like “The Death of Dick Long” and “Swiss Army Man”.

Additionally, “Everything Everywhere All At Once” will do the honors of being the opening movie for the SXSW Film Festival on March 11, 2021. Moreover, the organizers of that film festival expressed their big enthusiasm for the movie and called it “mindblowing”. After that festival release, the movie will go on to be distributed at the aforementioned date by A24 films. So, with those kinds of endorsements, we can surely expect an exciting March release for 2022.

Everything Everywhere All At Once Trailer:

The cast has Michelle Yeoh in the lead role playing Evelyn Wang, a woman whose existence is split across different universes. You may remember Michelle Yeoh for her roles in “Crouching Tiger, Hidden Dragon” and ” Tomorrow Never Dies”. In the male lead role, Ke Huy Quan plays Evelyn’s husband. You may remember him from his roles in “The Goonies” as Data, and in “Indiana Jones and The Temple of Doom”. Veteran actor James Hong plays Evelyn’s father. You may remember Hong from his roles in “Godzilla, King of the Monsters”, “Mulan” and “Kung Fu Panda”. Also, in the cast, we have Jamie Lee Curtis as an office clerk. Curtis is notorious for her roles in the first “Halloween” horror movies series as well as “Freaky Friday” and “True Lies”. Lastly, Brian Le, Andy Le, and Jenny Slate round up the cast.

Michelle Yeoh plays Evelyn Wang, a Chinese immigrant who runs a laundromat and tries to get her taxes done in “Everything Everywhere At Once.” However, while listening to an accountant (played by Jamie Lee Curtis) droning on about her receipts, she is abruptly transported to another world, where a man who appears to be her husband (played by Ke Huy Quan) informs her that he isn’t the husband she knows, but rather one from another world.

In the first trailer for the film, the man goes on to say that he’s seen “thousands of Evelyns” and that she can access her alternate selves’ emotions, memories, and skills. “There’s a malevolent force spreading through the many verses,” he adds, “and you might be our only chance of stopping it.” Evelyn is also shown as a chef, a famous actor, and a kung fu artist in the trailer. Hinting at her opportunity to access the lives of her multiversal selves whenever she needs to. Of course, the trailer teases Evelyn’s emotional journey in the movie, particularly her desire to be close to her family.

While directors Daniel Kwan and Daniel Scheinert enjoy taking audiences on wild rides in their films, the desire to emphasize the importance of connection appears to be the common thread that runs through their work. Fortunately, “Everything Everywhere All At Once” seems to be following in that tradition. The duo’s prestige as one of the most thrilling and imaginative movie director teams working nowadays appears to be cemented.

Also Read: Where is A Bad Mom’s Christmas Filmed? The American Christmas Comedy

Where is BBC Two’s Together Filmed? All About The Stunning Locations