Holiday has arrived and fans are still asking when will Beesmas event in the online-multiplayer Roblox's Bee Swarm Simulator will release in 2021. 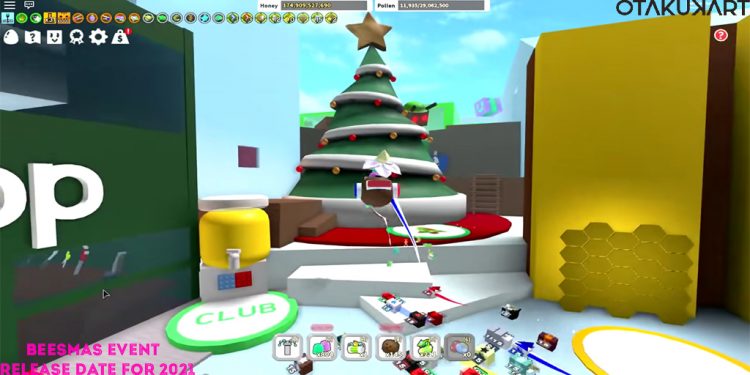 The holiday season is here for everyone. With holiday comes Beesmas event, the Roblox’s Bee Swarm Simulator most famous annual event. It is one of the most awaited events in Bee Swarm Simulator that started in 2018. Currently, the most asked question by its fandom is when will the Beesmas event be releasing in 2021? You have arrived at the right place as this article will detail all that we know currently, like its release date and duration.

Bee Swarm Simulator is a multiplayer game made in Roblox by Onett. The game was released on March 23, 2018. In this game, the players have to do all tasks related to bees like hatching bees, making a swarm with them, collecting pollen, and turning them into honey. The game reached 1 billion visits in 2020, making its 19th game to cross 1 billion on Roblox. In addition, the Bee Swarm Simulator Club reached 10 million members in 2021. Bee Swarm Simulator was nominated four times in Roblox’s 6th annual Bloxy Awards in 2019. Out of four awards, it went on to receive three awards. Those are Best Gameplay, Best Social Club, and, most importantly, the Game of the Year award.

What is Bee Swarm Simulator?

Bee Swarm Simulator is a simulation game that focuses on tasks related to bees. One developed and published it in March 2018 on Roblox. Collecting honey is the main objective and main currency. In the beginning, the player automatically receives three main tools, including a basic egg, a pouch, and a scooper. Then the players choose a hive and hatch the eggs in them. Then players collect pores available on any field using the scooper. There are various fields available in the game, with the most basic sunflower field. Players then bring the collected pores into the hive. First, the bee will turn the pores into honey, and later, it can be used to buy more tools in the game, which will help the player progress further in the game.

NPCs in-game give side quests to players. The quest generally involves dealing with mobs or collecting pores. Collecting ability tokens and goo are other side quests available, but they are advanced.

Beesmas event is an annual event based off on Christmas. The event first started on 26th December 2018. This event ended in March 2019. Beesmas event brings in much content like packs and quests. The packs bring in new tools, characters, collectibles, etc. these are purchasable using Robux(Roblox’s in-game currency). In addition, special NPCs arrive during these seasons that are the primary quest giver. These NPCs are also called traveling bears. After completing their quest, they give some special rewards. Of all the traveling bears, Bee Bear has arrived on every Beesmas.

There is good news for every Bee Swarming Simulator player. The event launched on December 26, 2021. This year’s Beesmas is a soft launch, as developer Onett said in the official Bee Swarm Simulator discord server. The main reason was due to the unstable state of the game (mainly bugs) at the event’s release. However, he said he would keep fixing the game during the event and add more currently unavailable content.

Not much is added currently in the Beesmas event. Bee Bear is back for the 2021 Beesmas event. Now, he has only ten quests. More quests will be added for Bee Bear in the future update. Other NPCs also have the quest for the event, though Spirit Bear, Onett, Honey Bee, Gummy Bear, or Dapper Bear will not have any quest for the time being. Dapper Bear got his new shop roof in the event. There are only two packs right now. More Content packs might be added to the game, as stated by the developer on discord. The first one is the Buoyant Pack, and the Second one is the Precise Pack.

So the next central question by its fandom is when will Beesmas end? There is no end date announced by the developer as of yet. Last year the event ended in March 2021. So considering this, fans should expect it to end anywhere between February and March of next year.

Also Read: Elden Ring: When Is It Coming? Expectations and Gameplay