When does Luffy use Gear 4 & How Does it Work?

Throughout the course of One Piece, Monkey D. Luffy has evolved into one of the most feared pirates on the high seas. Luffy has mastered various powers in the form of gears throughout the years, thanks to the Gomu Gomu no Mi’s powers. Gear 4 is one of the most recognizable techniques used by Luffy. But when did Luffy use Gear 4?  Gear 4 is one of the strongest moves in Luffy’s arsenal of techniques, by virtue of which he’s defeated the likes of Doflamingo, Cracker, and even Charlotte Katakuri.

Monkey D. Luffy is one of the most formidable pirates currently sailing the waters of the One Piece world. He ate the Gomu Gomu no Mi when he was very young, and it converted his body like rubber. Although this Devil Fruit is exceedingly difficult to wield properly, Luffy eventually learned how to fight efficiently with the strength that it provided utilizing methods known as “Gears.” With its ferocious power only proving to be deadlier with each passing arc, Gear 4 has certainly served its purpose extremely well in the story.

How did Luffy come up with Gear 4?

During his two-year training in Ruskaina, the island of 48 seasons, Monkey D. Luffy had the concept for Gear 4. With the monsters on the island proving too difficult to kill, Luffy resorted to utilizing Gear 4 to overwhelm them, and he did so magnificently. Luffy’s use of Gear 4 has improved greatly over time, and he can now utilize it without many of the difficulties that he encountered at first. It will only get stronger with time, especially with more powerful villains coming. 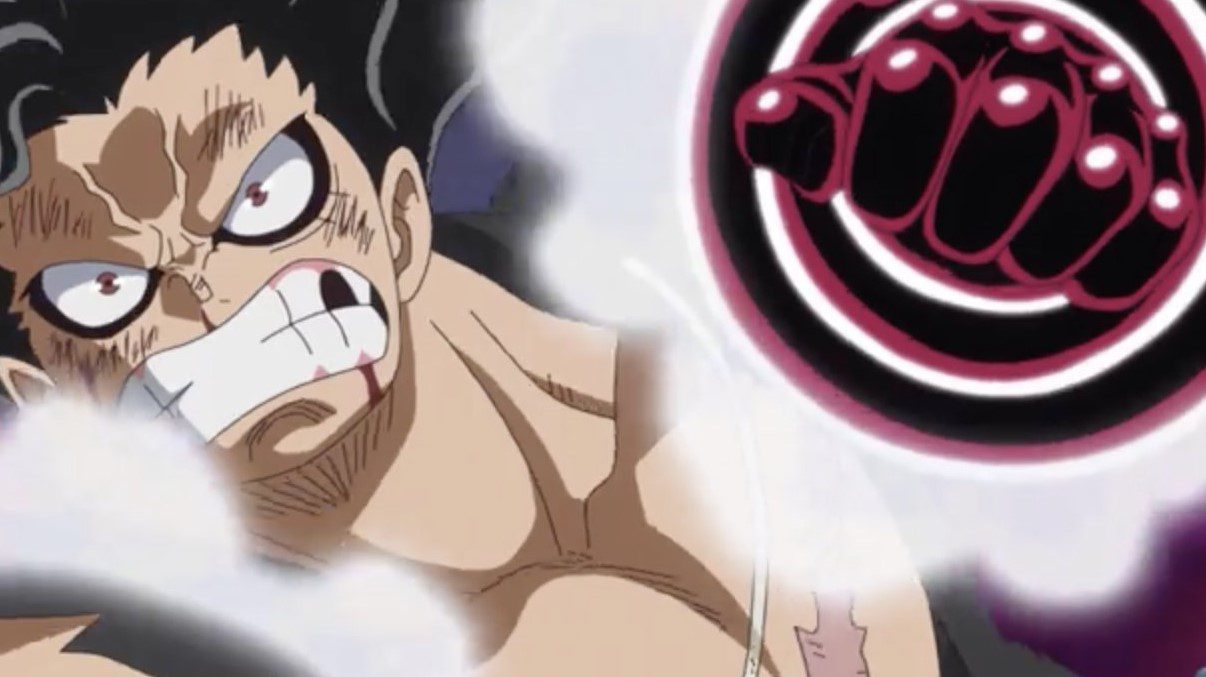 Every piece of Luffy’s gear has a distinct Gomu Gomu no Mi property come into play. In Gear 4, Luffy relies on the elasticity and compression that his Devil Fruit provides. Luffy is able to compress his strength utilizing Busoshoku Haki after blowing air into his muscles. This, in turn, considerably enhances the elasticity, giving him greater speed and power. According to Silvers Rayleigh, this is a super-smart technique to deal with adversaries. It also allows Luffy to fly, which is another benefit of Gear 4.

When did Luffy use Gear 4 for the first time?

Luffy initially uses Gear Four in the anime One Piece Episode 726, titled “Gear Fourth! The Phenomenal Boundman!”. Luffy removes his sandals and activates Gear Fourth in this episode. His body transforms into a bloated torso covered in tribal-like patterns and coated with Busoshoku Haki. This Boundman form leads him to bounce incessantly, which he is unable to stop. Doflamingo chuckles at the foolishness of Luffy’s new shape, doubting his abilities; Luffy punches him immediately after, sending him flying over the village below the tower. The struggle continues, with the Shichibukai straining to maintain his balance against ‘Straw hat’ and his new form.

How does Gear 4 Work?

Before biting into his forearm, Luffy covers his arm in Busoshoku Haki. He blasts a huge quantity of air into his body, similar to how he activates Gear Third, but this time he inflates his muscle structure before dispersing the air throughout his body, with a concentration on his upper half.  If Luffy is stopped in the middle of blowing, his arm will progressively collapse. When using Gear Fourth, Luffy makes great use of his Busoshoku Haki, coating his arms, legs, and most of his torso with it to the point that it hardens and turns black.

The Haki coating on his body resembles the wispy ends of flames, giving the impression of tattoos. He also becomes physically taller, reaching nearly 4 meters in height. In this state, Luffy emits steam continually, like he does when utilizing Gear Second. Gear Fourth, when combined with Luffy’s rubbery composition and compressed muscular structure, lends explosive force to Luffy’s assaults. It also provides him with heightened defensive skills. Depending on the situation, Luffy may transform Gear Fourth into various forms.

What are the different forms of Gear 4?

Luffy uses gear 4 in different ways. Each of these ways focuses on different approaches.

Boundman is Luffy’s initial Gear Four form. Luffy’s proportions shift as his body expands significantly, with his arms, upper chest, and legs covered with Busoshoku Haki. As a result, he is unable to stand motionless on the ground and must continually be bound on the spot. This form, much like Gear Second, seems to utilize the principles of Rokushiki. Boundman possesses both high-speed movements similar to Soru and the ability to kick off the air, reminiscent to Geppo, cleverly adapted to his body’s elasticity: Luffy not only bounces off the air but allows attacks to bounce off his own body. His body is strong enough to defend against cutting attacks head-on.

Luffy unveiled another form of Gear Four known as Tankman during his encounter with Charlotte Cracker. Because Gear Four promotes a boost in Luffy’s metabolism, he is able to depart his Tankman form quickly after utilizing it. This was the situation when Luffy was able to burn off the large number of biscuits he had consumed during his fight with Cracker shortly after defeating the Sweet Commander.

Unlike his other two Gear Four forms, Luffy’s forearms, legs, and upper torso are only slightly expanded, while the rest of his body retains its original dimensions. Luffy obtains a huge increase in speed and the ability to utilize “Python” to modify the direction of his strikes in this form, which he already has in his Boundman form. However, Snakeman enables his assaults to constantly accelerate the longer they continue, allowing Luffy to not only press an attack harder on a dodging opponent but also to increase the attack’s speed and strength until he ultimately lands the blow.

Also Read: In which episode does luffy get defeated?

All Ryomen Sukuna References In The Pages Of Japanese Mythology

"Know your place, fool." The phrase itself is enough to figure out whom I am talking about. Despite being an...