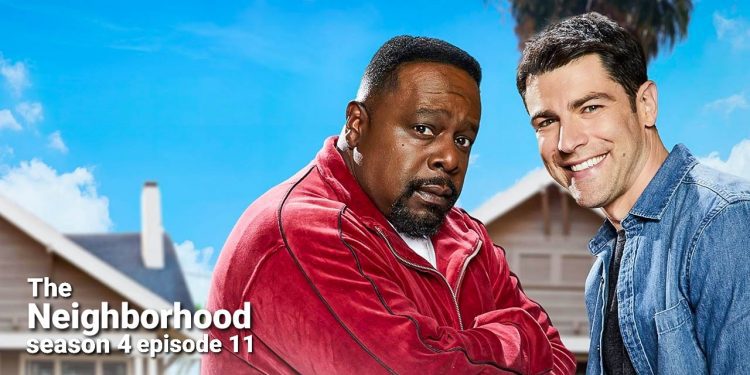 “The Neighborhood” season 4 episode 11 will release after a short hiatus. Episode 11 currently doesn’t have an official synopsis. However, there’s plenty to discuss and recap when it comes to what the show offered the last time around. We saw a reluctant Calvin and a very enthusiastic Dave attend to their jury duties. After a great deal of Calvin and Dave trying their best to execute their judicial duties (Calvin talks about Law & Order and Dave hasn’t a clue), they finally come to a conclusion that the court had already arrived on since the start.

Meanwhile, Gemma and Tina hear about a film being shot at Marty and Malcolm’s and get excited for a chance to star in it. They do get roles to play as well. However, to their absolute shock, they learn that the film being shot was an adult one. As for the upcoming episode, there exists little information regarding the credits and an official synopsis. So let’s dive into what episode 11 of “The Neighborhood” season 4 may entail. Spoilers for episodes 10 and 11 ahead!

Episode 10 opens with Calvin and Dave receiving mails that cheer up Dave, but Calvin can’t be bothered by the bills. One of the mails turns out to be a special drag for Calvin — it’s a summon for jury duty. Calvin can’t care less and tells Dave he’s not paying any heed to the letter. Dave tells Calvin that he shouldn’t ignore the summon and that it could have serious legal repercussions. So Calvin has to tag along and attend the session at the City Hall.

Despite his great efforts at getting disqualified, Calvin fails to impede his chances of not becoming a juror. The case continues. Meanwhile, back at the Calvin’s, Tina and Gemma are sipping wine and binging “Ladies Who Kill.” That’s when Marty and Malcolm arrive to break the news. They have rented their house for a little indie movie. The news piques Gemma and Tina’s interests, and the two get super pumped. Gemma wants a chance to grab a role in the file, so does Tina.

Back at the city hall, Calvin and Dave continue causing disruption. Calvin calls for a mistrial, inviting the judge’s call out to the fact that he has the authority to announce a mistrial. Calvin tries to inject the knowledge that he’s acquired from “Law & Order.” However, he soon learns to reserve his “expertise.” He only wants an out. Calvin later talks to Tina about his annoyance with the jury duty. Tina makes him realize how a juror is an important role for him to play. She talks about how African Americans have been historically deprived of an equal footing or say in the judicial processes and decisions.

Calvin realizes it too and gets back to the case. Recreating the scene where the alleged shoplifting took place, Calvin concludes that the accused old woman didn’t shoplift. He shares his deduction with the other jury members the next day. They all agree as well. However, when the next hearing arrives, Calvin notices the defendant is wearing a necklace that was shoplifted from the scene of the crime. He asks the judge to let the reconvene. At the meeting, he tells everyone his reason to backtrack his deduction. That’s when the jurors learn that they’re all free to go since the woman confessed to shoplifting.

Meanwhile, Tina and Gemma are over the moon with excitement regarding the possibility of landing a film role. They talk to the director of the film, and he takes them on their proposal. Calling them the “mom types,” he offers them background roles. Meanwhile, Marty meets the female lead of the movie, Jasmine. She wins him over within a fraction of a second. Marty falls for her even harder when he learns she can speak Klingon.

‘The Neighborhood season 4’ episode 11 will release on January 17, 2022. Currently, there is no official word on what the episode may entail. Apart from an official synopsis, we also don’t have any announcements regarding the directorial and writing credits. However, we do have the official title for the next episode — “Welcome to the Knockout.” The title might suggest a boxing match or any other sport format that involves a knockout. Now, who might be involved in this knockout, we can’t say right now. However, one thing is for sure; there will be a lot of knockout gags and goofs as the hilarity ensues.

Episode 11 of ‘The Neighborhood’ season 4 will release on CBS on December 17, at 8/7c. New episodes of the sitcom are released weekly on CBS every Monday. You can binge-stream “The Neighborhood” season 4 online on Paramount+ and CBS’s official website. You can also access CBS stations online via Live TV services like Fubo TV, Youtube TV, DirecTV, Sling TV, and Hulu+Live TV. There’s also the option to rent or buy individual episodes from VOD platforms like Google Play, VUDU, and iTunes.

Also Read: Can Nolan Put Jason Behind Bars in The Rookie Season 4 Episode 11?