What Will Go Down In ‘The Book of Boba Fett’ Episode 3? 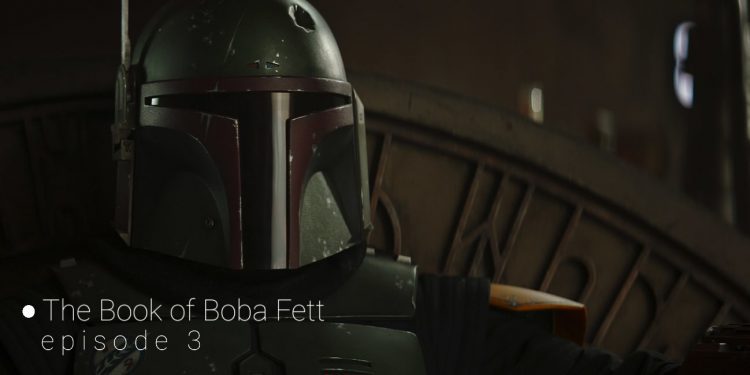 "The Book of Boba Fett" streams on Disney+

“The Book of Boba Fett” Episode 3 will drop this week with Fett’s territorial claim on Tatooine getting some serious challenge from the Hutt twins. Episode 2 introduced the twins, along with giving us the first look at the fan-favorite character from the Star Wars canon. Fett and Fennec have been making rounds around the town, trying to establish their authority and expand their criminal empire. However, replicating Jabba’s presence and power is not easy. Fett has already received a couple of examples of how difficult this journey will be.

Meanwhile, we continue to see Boba’s flashbacks. His time with the Tuskens has so far been one of the most interesting parts of the series. Delving into the culture and lifestyle of the Tusken Raiders, we have seen a fair bit of world-building, which may be integral to the show’s plot more than we think. Let’s now delve into all that episode 3 of “The Book of Boba Fett” will entail. Spoilers lie ahead!

Episode 2 opens with Fennec bringing in one of the assassins she captured following an assassination attempt at Boba and her in the premiere episode. Boba asks him who he works for and why they’re after him. However, Boba learns from the droid that the assassin isn’t going to break easily. He belongs to an elite assassin group known by the name of “Night Wing”. Fennec and Boba don’t quite see the hype. They test the assassin by threatening to kill him if he doesn’t speak up. However, he seems to be worth his salt. That’s how it seems at first, anyway. However, when he falls into the rancor pit, the fear gets to him, and he finally breaks. He claims the mayor of Mos Espa, Mok Shaiz, sent him.

Boba and Fennec decide to pay the Mayor a visit. Boba inquires Shaiz about why he sent an assassin to kill him. Shaiz denies sending anyone for such an activity. Shaiz gets his men to instantly shoot the assassin dead. He then proceeds to reward Fett for fetching him the assassin. Fett accepts the payment but as a tribute from the mayor to him. Shaiz warns Fett by giving him advice, stating that running a family is significantly more difficult than bounty hunting. He then tells Fett to go visit the Sanctuary again. Fett and Fennec visit the Sanctuary, where Fwip informs them of the Hutt’s twins returning to claim the throne.

That’s when the twins arrive and have a tense confrontation with Boba and Fennec. The twins present their claim to the throne. Fett retorts, claiming the throne to be his now. We also see the twins’ show of might when their Wookie bounty hunter Black Krrsantan shows up, raising the tension even more. We can expect the fan-favorite Wookie bounty hunter to throw down with Fett and Fennec soon. Anyway, noticing how Fett is adamant on his territorial claim and that they can’t risk a fight at the moment and place, the twins retreat. However, their departure is only momentary.

Fett Integrates into the Tusken Culture

Meanwhile, Fett has another sequence of flashbacks to his time with the Tuskens. In the flashback, we see him integrating even further into the Tusken culture. Fett gets some gaffi stick combat training as well as some tips on desert survival. He then helps them following an attack by the passing Pyke train. He steals some speeders from a gang and trains the Tuskens to ride them. They then launch their onslaught and successfully stop the train.

Fett then warns the Pykes to pay a toll to the Tuskens whenever they traverse through the desert henceforth. As a thanking gesture, the Tusken chief gifts Fett a lizard, which is actually a part of a ritual. The lizard crawls inside Fett’s nose and up to his noggin. He then has a trip, both of a spiritual nature as well as a physical one. He returns after his trip with a branch, which is then used to make his very own gaffi stick. The episode then ends with Fett performing the tribe’s dance along with other members.

“The Book of Boba Fett” episode 3 will release on January 12, 2022. As of now, there’s no official synopsis available for the upcoming episode. There’s no official word regarding the directorial and writing credits, as well as a title either. However, the plot of the next episode is most probably going to revolve around Fett and Fennec’s efforts at contending with the Hutt twins. The twins are going to make a move, and the fragile political landscape of Tatooine will close in on the duo. With perils aplenty and the doom that is Black Krrsantan in the fray as well, we can also expect to see the continuation of Fett’s flashbacks wherein we may see more of his time with the Tuskens.

Episode 3 of “The Book of Boba Fett” will premiere on Disney+ on Wednesday, at 3:00 a.m. ET. The tv series is a Disney+ original, so that means it’s going to be exclusively available to stream on the streaming platform. The streamer makes the show available worldwide at the same time. You can watch the show online via the Disney+ app or the official website. You can also stream “The Book of Boba Fett” on the Disneyplusoriginals website.