‘What We Do in the Shadows,’ created by Jemaine Clement, is a hilarious mockumentary that follows a gang of ancient vampires as they attempt to fit into contemporary life. This horror-comedy program, based on the 2014 film of the same name. Centers on humorous encounters between otherworldly creatures and people in New York. The Emmy-nominated series first aired on March 27, 2019. And today in Otakukart, we are sharing with you everything we know about What we do in the shadows season 4.

The program has gotten a lot of positive feedback for its unique structure, quirky characters, beautiful costumes. And delightfully bizarre dark humor. As a result, it’s not surprising that fans want to see more of the oddball bloodsuckers they’ve grown to adore over the course of three seasons. Season 3 concludes on a little cliffhanger about the destinies of our favorite vampires. So, what’s the deal with the fourth episode of the show? Everything you need to know is right here!

What we do in the shadows season 4 release date.

What we do in the shadows will release in fall 2022. To begin, FX announced on August 13, 2021, that the series would return with a fourth chapter. We’re not shocked that the program was renewed so quickly since it has high ratings and a large fan base. Season 4 filming began in late September 2021. We can look at the show’s release schedule to get an idea of when the next season will be released. Due to pandemic-related delays, seasons 1 and 2 of the mockumentary aired in the spring. While season 3 aired in the autumn.

Considering the above facts as well as the time necessary for shooting and post-production. We can fairly estimate that the show’s fourth part will not be released until Spring 2022. So, viewers may expect the fourth season of ‘What We Do in the Shadows’ to premiere in the second quarter of 2022. The newest installment is planned to continue the show’s tradition of 10 episodes every season. Season 3 of ‘What We Do in the Shadows’ started on FX on September 2, 2021. And concluded on October 28, 2021. The third season consists of 10 episodes, each lasting roughly 30 minutes.

What we do in the shadows season 4 cast

The majority of the primary cast will return for the fourth season. Kayvan Novak (he plays Nandor the Relentless), Natasia Demetriou (she plays Nadja), Matt Berry (he plays Laszlo Cravensworth), Mark Proksch (he plays Colin Robinson), and Harvey Guillén will also appear (as Guillermo de la Cruz). We may also anticipate  Myrna Cabello, Anthony Atamanuik, and Cree Summer to reprise their roles as Silvia, Sean, and Jan, respectively. There will most certainly be other celebrity appearances as well. Mark Hamill, Tilda Swinton. Danny Trejo, Evan Rachel Wood, Nick Kroll, and Craig Robinson, among others, may feature in season 4 since they have appeared in prior seasons. We may also see a few fresh faces.

Where to watch What we do in the shadows online?

If you wish to watch What we do in the shadows online, the internet has a few options for you. Firstly, you can watch it on the FX website with your cable subscription. If you don’t have a cable subscription. No worries! You can also watch this show on Amazon Prime Video, in BBC iPlayer, on Disney+ Hotstar, Fubo TV, Sling TV, DirecTV, YouTube TV, Google Play, Xfinity, and on Hulu. In the next section, we will share with you details about the potential plotlines for season four.

What we do in the shadows season 4 potential plotlines

Guillermo emerges as a formidable vampire killer in Season 3, prompting the other vampires to debate his destiny. Nandor and the others are appointed to lead the local Vampiric Council. Jan and her ilk brainwash Nandor. Colin, on the other hand, dies on his 100th birthday but is resurrected as a baby. Moreover, Nandor resolves to leave Staten Island and go across the globe because he is tired of his despair and his pals’ destructive conduct. Also, season 4 will most likely follow Nandor as he navigates life on his own. 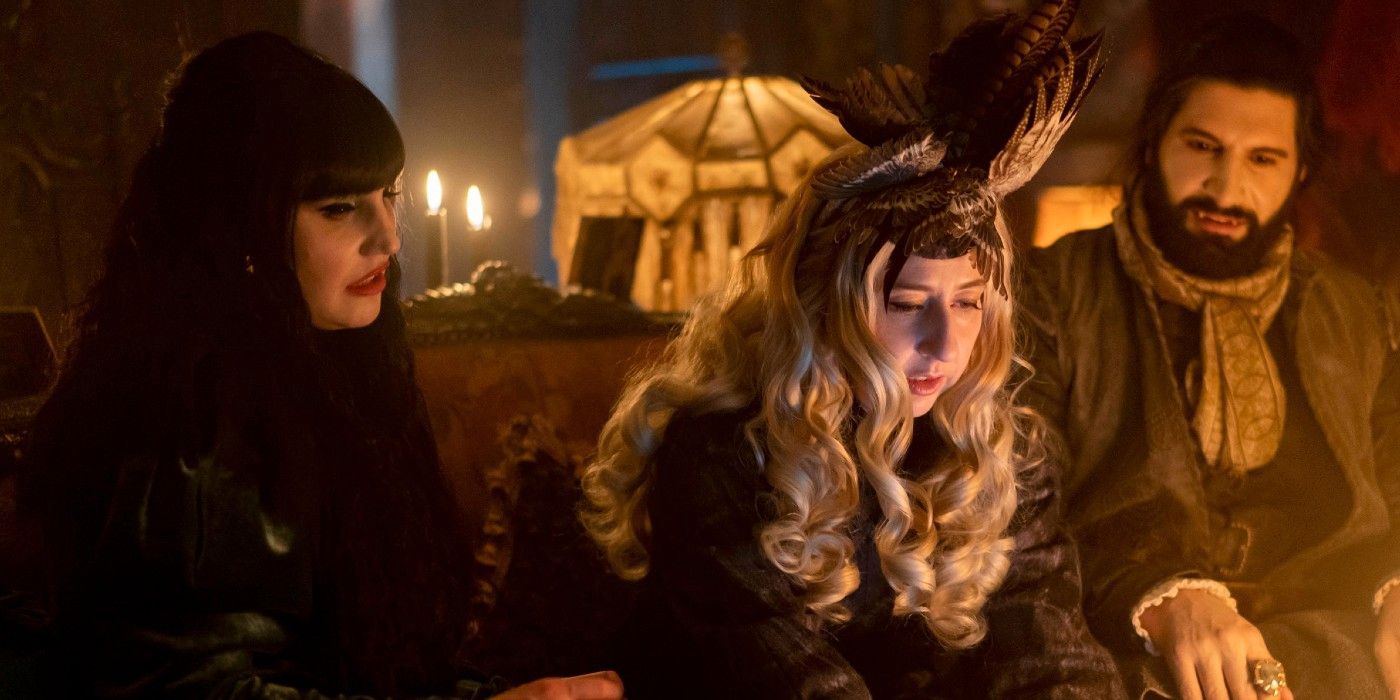 What We Do in The Shadows Season 4

We’ll also watch how Laszlo, Colin, Nadja, and Guillermo handle their lives without him. Furthermore, we anticipate that the future season will follow Colin’s development from a newborn vampire to an adult vampire. Guillermo and Nadja’s travels in England might play a significant role in the plot. Guillermo’s family will also be the subject of the fourth chapter. According to reports, current events will be interwoven into the highly anticipated fourth season. This will specifically involve the Suez canal blockade, as announced by showrunner Paul Simms at the New York Comic Con 2021. Season 4 is unquestionably going to be more ambitious and bizarre than any of the prior seasons.

Guillermo’s story will be key to season 4

Guillén’s Guillermo’s development has been a crucial subplot in What We Do in the Shadows. In season one, the unnoticed familiar learns that he is a descendent of the famed vampire hunter Abraham Van Helsing. Guillermo’s vampire-hunting prowess is on full show in season 2, however, he only utilizes it to protect the vampires he serves. Guillermo’s identity is revealed in the season finale. Which ends on a suspenseful cliffhanger. As he kills numerous Vampiric Council members to protect Nandor and the group. Guillén expressed curiosity in delving more into Guillermo’s ancestry in What We Do in the Shadows. His demands have already been granted, with Executive Producer Paul Simms formally confirming that future seasons would focus on Guillermo’s beginnings.

Paul Simms confirmed that additional members of Guillermo’s family would be introduced in What We Do in the Shadows season 4. Moreover, Guillermo’s next of kin would first appear in episode 404. And their appearance would make him very agitated. After 10 years of serving the vampires, he will discover how he has neglected his responsibilities to his family. Simms also hinted that Guillermo’s family might have Van Helsing DNA. Though they may not be aware of it as much as the familiar himself. Finally, Simms said that Guillermo’s heritage would be traced back to Van Helsing in season 4, perhaps implying that the vampire hunter would be Latino in the show’s reality.

Guillermo gets a cool story for season 4

Until far, fans had only encountered Guillermo’s mother, Silvia (Myrna Cabello), in the season 2 finale. Guillermo first leaves the vampires to live with his mother in the Bronx in that episode, dissatisfied with their apathy to him. However, after learning of the Vampiric Council’s intentions, he returns to save Nandor and the others. Silvia was shown to be this unassuming lady that irritates Guillermo with her excessive parenting. It’s uncertain if Silvia, along with Guillermo’s other relatives, will return in season 4.

Many anticipated Guillermo’s past to be explored in What We Do in the Shadows’ forthcoming season 3. But, as the show’s official trailer shows, there are larger fish to fry, as the vampires will band together with Guillermo to take control of the Vampiric Council. Season 3 will undoubtedly have less time to devote to Guillermo’s genealogy as a result of this new change in the status quo. However, as indicated in one of the show’s latest teasers, allusions to his dissatisfaction with being a familiar would be abundant. As a result, it’s plausible to predict that season 3 will act as a set-up for season 4, which will unravel Guillermo’s background before establishing his decision about his identity in a definitive and momentous manner.

While fans naturally anticipate Colin Robinson to ultimately change into an energy vampire, Paul Simms says that isn’t always the case. As Executive Producer Paul Simms explains, the quandary in What We Do in the Shadows season 4 is one of “nature vs. nurture.” Laszlo will strive to grow the infant “into a different creature than what he was” now that he is in charge of parenting. In this manner, in the future, Colin may be able to avoid his destiny. And he may also become a more intriguing version of himself. However, they will only find out for certain when Season 4 begins. Since Colin’s childhood will be a major subplot in the upcoming show.

While others may disagree, it would have been a great disservice to fans if What We Do in the Shadows had faked Colin’s death. True, the choice to kill off the monotonous entertaining energy vampire was a daring one on the part of the show’s creators. But the way they handled that track was unquestionably brilliant, and it filled the series with a new feeling of revitalizing vitality. Nobody expected a windbag, angry Laszlo to end up caring for the obnoxious Colin Robinson in infant form. But What We Do in the Shadows made that possible. But as the narrative unfolds in the next season, it will undoubtedly deliver some funny blows.