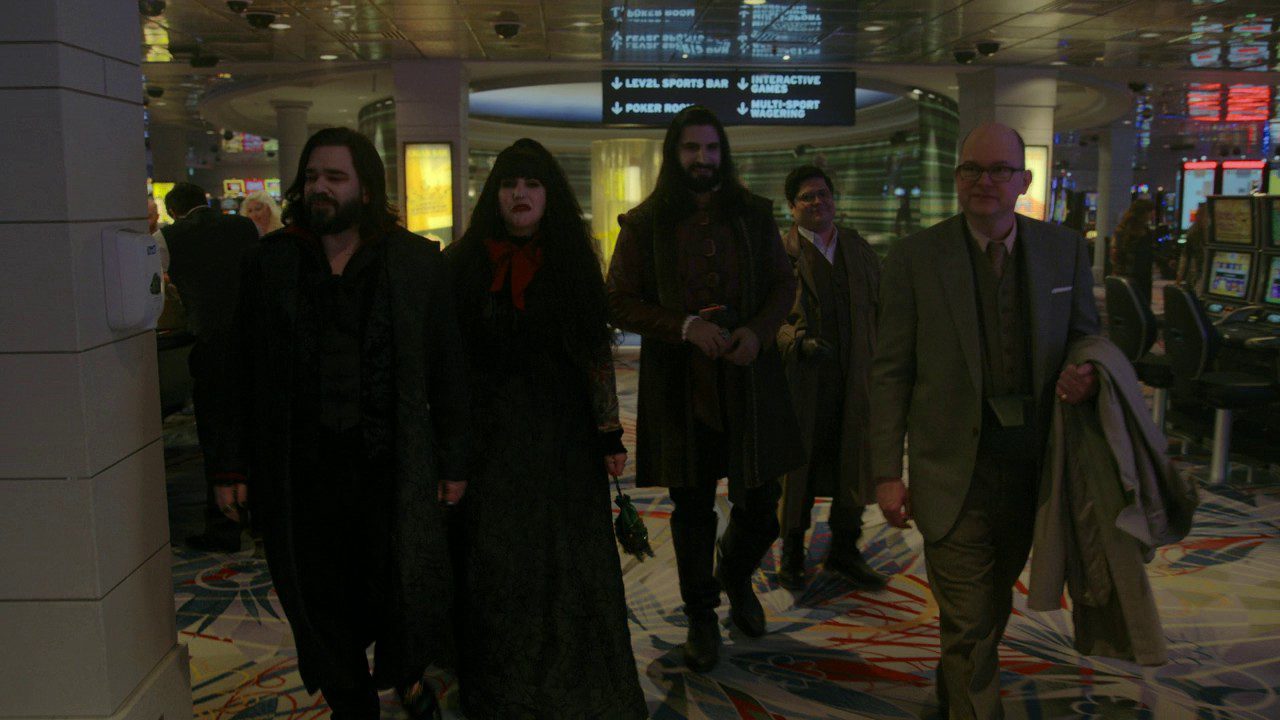 From What We Do in the Shadows Season 3 Episode 4 Featuring Nandor, Laszlo, Nadja, Colin and Guillermo

What We Do in the Shadows Season 3 Episode 5 calls for justice to be served. Well, in the case of our vampires, we know, surely it has to after the antics we have seen of theirs. Recently on the show, the vampires and Guillermo have been trying to build their friendship from ground zero. Especially after the fallout, they had in the last season. Guillermo has transitioned a lot from being a familiar to becoming a  bodyguard. Still, even though he is not part of them, the vampires are making sure he feels the same way.

So anyway, the vampires were traveling after a long time in a while. They are invited to their neighbor’s anniversary celebration. So in the vampire’s case, there is a number of things that need to be taken care of. One of them is the precious ancestral soil that gives them powers amidst the celebration, live music, and gaming. That one thing goes missing leaving our vampire friends in trouble. But there, one friend, Guillermo, got a chance to prove himself. So did he bring the soil back to them? Let’s find out.

What We Do in the Shadows Season 3 Episode 4 Recap

Previously on What We Do In The Shadows, we opened up with the vampires invited to their neighbor’s group getaway. Sean and Charmaine are celebrating their anniversary, and the vampires will be traveling and join them in the celebration. So as everyone reaches the hotel, they settle down and soon join the anniversary couple at the table. Amidst this, we get to know that Gullleirmo is not exactly part of the familiar anymore and is more of a bodyguard now. But Nandor suggests that they don’t make him feel like that. 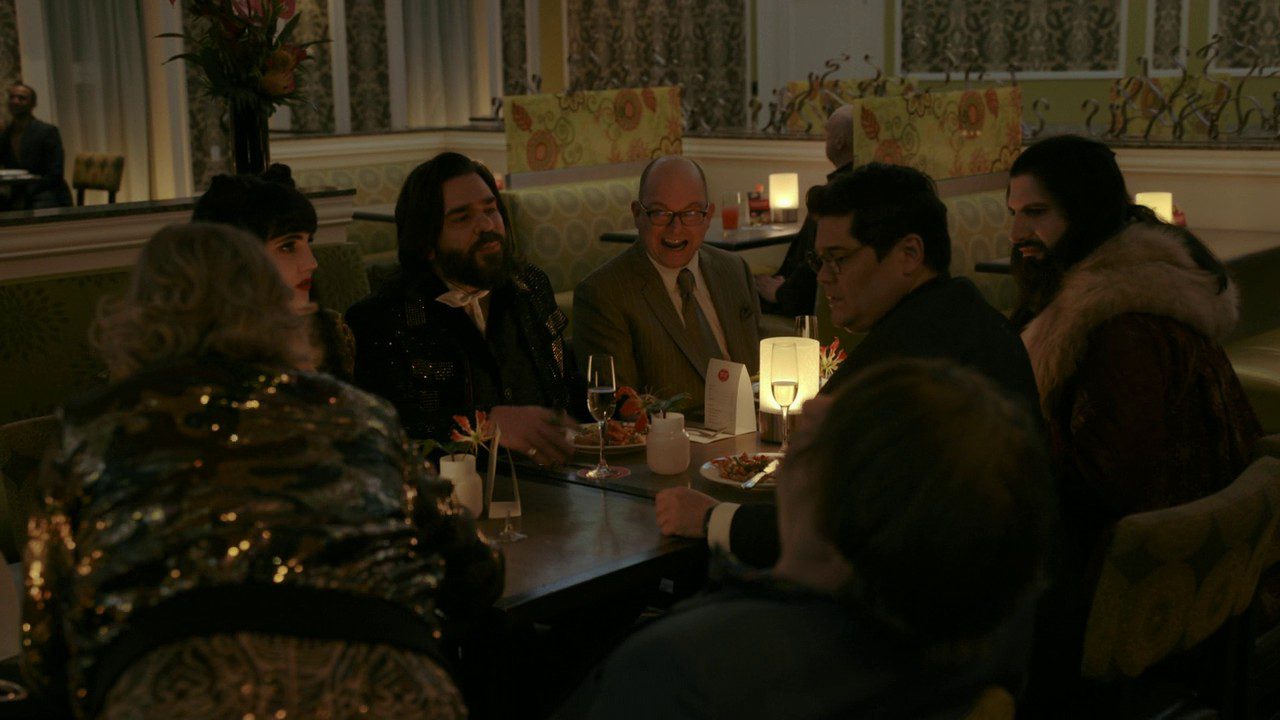 From What We Do in the Shadows Season 3 Episode 4 Featuring Nandor, Laszlo, Nadja, Colin, and Guillermo

The Vampires try but completely force it on Gullerimo until Sean takes the attention away as he gets chips to the casino. Thus everyone leaves Guillermo alone again. Nadja is excited to see her favorite mates, the Rat Pack, perform live today and takes the ladies with her. He even takes them backstage to hang out with them. Colin is playing at the table while Nandor tries his luck on The Big Bang Theory game. Soon Gulleirmo realizes how obsessed Nandor has become with the game. He didn’t move for hours.

Everyone had fun until the vampires got back to their room to realize their ancestral soil was missing. This there powers will slowly go away. Now they need to send Gulleirmo on a journey. For that, Laszlo asks Sean for money without explanation. He just gives it away. As Guillermo is away to bring the ancestral soil, the vampires struggle their way through the Vow Renewal Ceremony of Sean and Charmaine. Post that, Laszlo realizes the Sean has lost all his money. 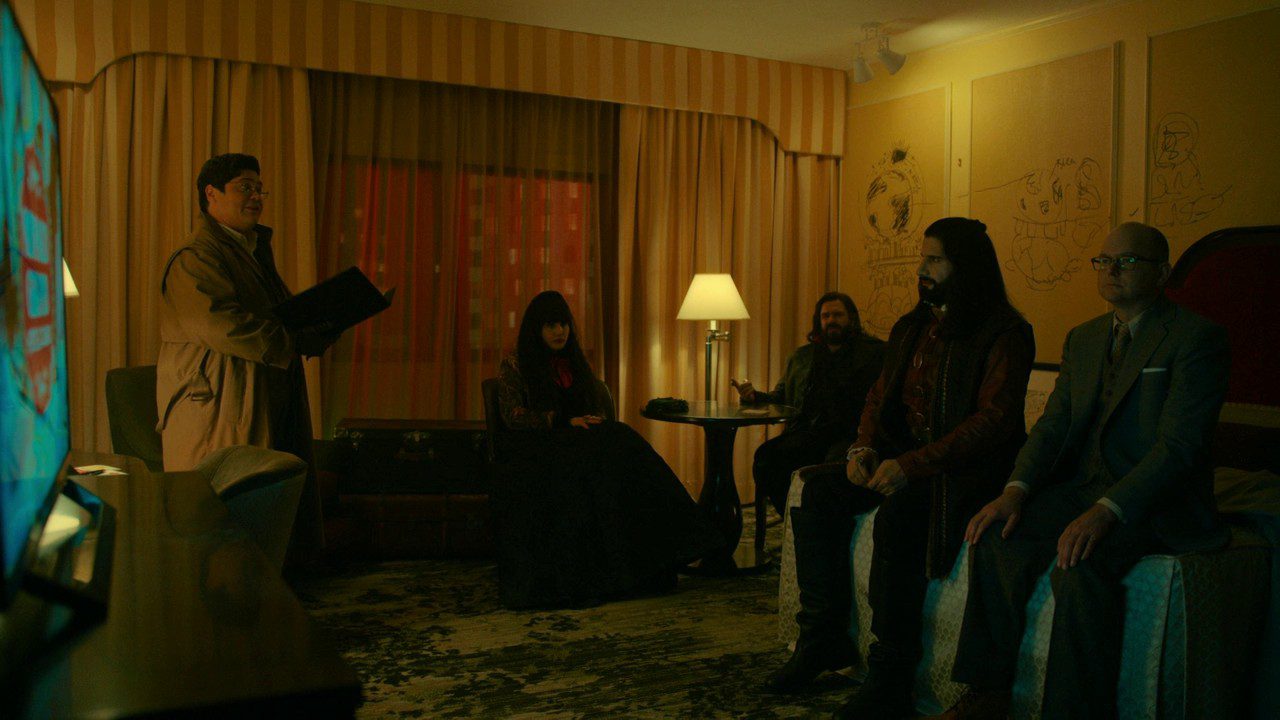 From What We Do in the Shadows Season 3 Episode 4 Featuring Nandor, Laszlo, Nadja, Colin, and Guillermo

Nadja spends time with Rat Pack while Nandor is on The Big Bang Theory Game. Until Colin takes the responsibility of actually teaching him what The Big Bang Theory is. By the end of the night, Guillermo returns and the vampires plan a divisive method to return Sean his money to close the episode.