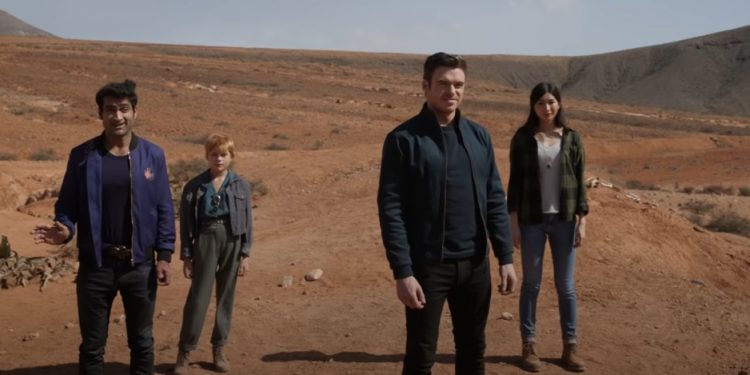 How does the 26th Marvel Cinematic Universe movie finish? Is the Marvel Studios’ Eternals ending explained? The latest movie by Academy Award-winner Chloé Zhao movie is visually stunning. Firstly, it has an amazing ensemble cast. Secondly, the film constitutes an important part of Phase Four of the Marvel Cinematic Universe. It tells the story of the immortal alien race. The Eternals emerge from their hideout after they’re pulled out in order to protect planet Earth from the Deviants, their sworn enemies.

The story goes about ten superbeings called the Eternals that come from the Celestial Arishem on a starship called Domo land on earth to kill the Deviants. After they’re done, they decide to stay on Earth for the next five centuries. They’re living far apart from one another as they patiently await the day in which Arishem comes back. As the plot unfolds, in the present time, the Eternals must regroup to face one big challenge. Now, let’s take a look at this Marvel movie ending unpacked here at Otakukart.

The Eternals’ mission was to prepare Earth for the “Emergence,” not fight the Deviants. Arishem explains that the Celestials have been going to plant their seeds on populated planets for millions of years to create new Celestials, with the Deviants sent by them to destroy the planet’s apex predators to ensure the development of intelligent life. The Celestials created the Eternals to exterminate the Deviants when they evolved and began hunting the planets’ native populations. The reversal of the Blip has brought Earth to the number of people needed for the birth of the Celestial Tiamut, which will result in Earth’s destruction.

The Eternals reassemble and determine to prevent the Emergence after learning to love humanity. They reunite with Kingo, Thena, and Gilgamesh before traveling to Druig’s home in the Amazon rainforest, where Kro and the Deviants attack them. The group kills most of them, but Kro kills Gilgamesh before fleeing. They visit Phastos after cremating him, and he suggests that Druig put Tiamut to sleep by enhancing his mind-control abilities with the Uni-Mind, a link between all the Eternals.

Makkari, who had been living in the Domo, was also discovered by the team. Ikaris reveals that he was informed of the Emergence centuries ago by Ajak. And that to stay loyal to Arishem, he fed Ajak to the Deviants six days earlier to avoid her from stopping it, before burying her body at her home to feign ignorance. Sprite joins Ikaris after fleeing due to her unrequited love for him, and Kingo also leaves the group because he does not want to fight Arishem or his teammates.

The Eternals battle Ikaris and Sprite before being attacked by Kro, then killed by Thena. Makkari locates the Emergence site at the foot of an erupting volcano in the Indian Ocean. And the Eternals battle Ikaris and Sprite until being attacked by Kro, who is then killed by Thena. After Sprite attempts to kill Sersi, Druig knocks her out. And the surviving Eternals work together to subdue Ikaris while Phastos activates the Uni-Mind. Ikaris breaks free from his shackles and approaches Sersi intending to kill her, but he is unable to do so due to his love for her. Sersi gains enough power to turn Tiamut to marble as Sprite joins the Uni-Mind. Ikaris, guilt-ridden, flies into the Sun, while Sersi, at Sprite’s request, uses the Uni-remaining Mind’s energy to transform Sprite into a human, putting an end to her perpetual childlike state.

Sersi, Phastos, Kingo, and Sprite remain on Earth while Thena, Druig, and Makkari travel to the Domo, searching for other Eternals. When Sersi, Phastos, and Kingo are remotely dragged into space by Arishem. Dane professes his love for her and is about to reveal a secret about his family history. Arishem expresses his displeasure with their treachery. But chooses to spare humanity if the Eternals’ memories demonstrate that humans are deserving of life. Finally, he disappears into a singularity, taking the trio with him, vowing to return for judgment.

If you want to watch Marvel Studios’ Eternals, then Disney+ is the place you need to go. Firstly, Eternals will drop on Disney+ on January 12, 2022, at 3:00 AM Eastern Time. Secondly, when The Walt Disney Company bought Marvel Studios, it made the streaming platform Disney+ the home for all things Marvel. Consequently, you will find there all the series and movies from that studio. That includes the entire Marvel Cinematic Universe, shows like Wandavision, What If? and many more. Moreover, you can also have access to the entire Star Wars collection, National Geographic, The Simpsons, and all of Disney’s shows and movies for just US$ 8 a month or US$ 80 a year.