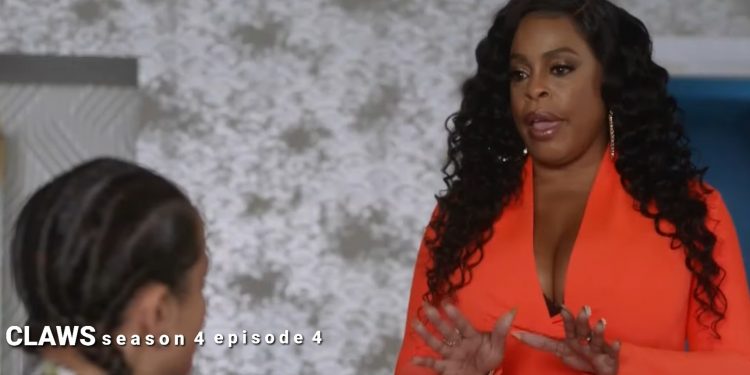 "Claws" season 4 airs every week on TNT on Sundays

“Claws” Season 4 Episode 4 drops the same day as episode 3. Desna’s new operation has taken off. However, with the high-stakes operation come high-stakes dangers. Desna and her crew are now handling a big operation from the top. With that kind of logistics, there are many obstacles ready to take it all down and snatch it away from Desna. Her main contenders so far are Uncle Daddy and Quiet Ann, who she broke away from in the last season. Virginia and others were hopeful in the initial episodes that the two will patch up soon. However, as the season moves forward, the bridge between the two former friends has been burning ever so fiercely.

It will probably be better to suggest that the bridge between them has been reduced to ashes now. There are no signs of getting back together. Episode 2 saw the rift between the two getting wider with Ann accompanying Uncle Daddy to steal Desna’s cash at Coddlefest. The episode ended with Desna approving Ann’s replacement. Now, the rift between them is only going to get direr. From the official promo we got off the fourth episode, Ann seems to be deciding on playing the dirtiest card. While Desna resorts to kidnapping Ann, the latter is deciding to become an informant for the police.

Let’s now delve into all that episode 4 of “Claws” Season 4 will entail. Spoilers ahead!

Episode 4 of “Claws” Season 4 will release on December 26, 2021. The episode, which will mark the fourth chapter of the season, is titled “Loyalty”. The official synopsis hints at Desna and her crew reaping the benefits of their new business. Episode 3 saw her kick start her new Oxy sales operation. The operation has taken off and is a success. However, being at the top of such a criminal game comes with compromises and huge risks. There are competitors and big sharks ready to consume you whole. Not to mention the legal repercussions that are always seeking to grab hold of you. In episode 3, we saw the crew facing certain challenges when it comes to running an operation from top-down.

The next episode continues to show those challenges. However, the fourth episode initially will explore how the operation’s success is being celebrated. That celebration, however, will soon turn to caution and worry when they discover the leaks in their operations. Desna and her crew will find out that someone is stealing their pills and reselling them under a different label. This is sure to lead to some further chaos and dangerous maneuvers as Desna tries to contain the situation. It also looks like that we’re going to see an intense confrontation between Ann and Desna. The latter says to the effect of playing dirty if her enemies are ready to do so too. So it seems we’re going to be in for a ride.

Episode 3 sees Desna work on her idea that she got in the previous episode after the love-making session with her new flame, who’s a delivery driver for lusty toys — a sex toy company. We see more of the guy in this episode when he expresses his desire to know more about Desna. So Desna gives Tony a job as her delivery guy. After attending the lusty toy party, Desna comes up with a plan involving her own Oxy sales operation.

Meanwhile, Polly continues to court the baron, with Ken trying to impede her efforts. On the other hand, Virginia’s efforts at replacing Ann with Georgia aren’t going so well. However, by the end of the episode, we see the two bond over their struggles. Elsewhere, Bryce commits a mistake when he sells the patches to a group that turns out to be a cult. The cult members kill themselves, so Clay and Ann have to come and recover all their patches to wipe the scene clean of any evidence.

“Claws” season 4 episode 4 is set to release on December 26, per its schedule, at 10:00 pm ET. You can watch “Claws” season 4 online on Hulu. Seasons 1 to 3 are currently available to binge on the streaming platform, with the fourth one becoming available as soon as it concludes. If you don’t have access to Hulu, you can stream the show via other online platforms. VOD platforms like Google Play, VUDU, Amazon Instant Video, and iTunes let you rent or purchase individual episodes or seasons at different prices.

Also Read: Is Monsterland Season 2 Coming Back to Hulu?