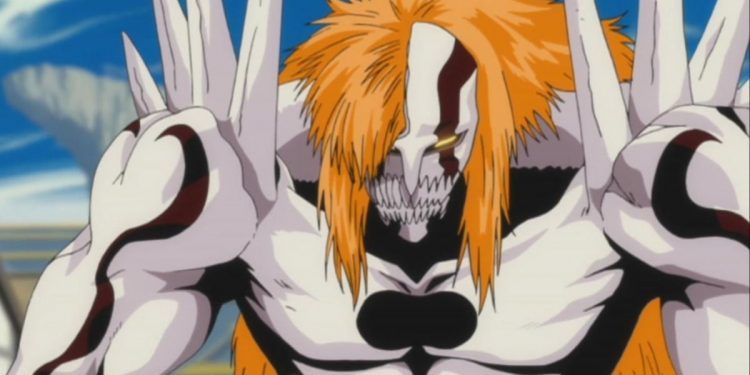 It was has been more than fifteen years since the debut of the anime, but Bleach still continues to remain a fan favorite. An action anime with one of the best fight scenes and an amazing plotline, Bleach is, without doubt, one of the best anime in the industry. Ichigo Kurosaki, rightfully the central protagonist of the anime, around which the anime revolves, is not only the strongest character in the series but is also extremely humble. He has a strict code of honor that he follows without fail despite the many terrible situations that he faces. Now, the list of his charismatic qualities will never end if we were to go on any longer. Talking about his most important fights, the one where he turns into a full hollow marks an important event in his life.

In this article, we shall discuss the whole event in detail and the circumstances that push Ichigo to become a full hollow. We shall tell you the episode in which Ichigo transforms into his full hollow form for the first time, amongst many other important details. Keep on reading to satiate your curiosity.

Also read: In what episode does Ichigo use Bankai for the first time In Bleach?

What Is A Hollow?

Before we answer the main question, we would like to give you a detailed account of what a hollow actually is and what leads a soul to become hollow. Hollows are deadly creatures who are by definition, the souls of humans who are not able to depart to the Soul Society after their death and remain in the Human World for an extended period of time. They are mainly evil spirits with the ability to eat the souls of both the living and the dead. The usual course of fate dictates that a soul pass on to the Soul Society, but some anomalous souls remain in the living world to achieve specific objectives.

These objectives may initially be of innocent nature, like the desire to look after a loved one, or in other instances, of negative nature like the strong desire to enact revenge. Despite the nature of the desire, ghosts are usually not able to connect with the living, and this, fueled by the fact that they are helplessly tied to their desires, leads them to become hollow. This, however, can be avoided If a Shinigami offers the soul a Soul Burial before it turns into a Hollow.

Hollows are deadly because they cannot help but be driven by an insatiable desire to devour other souls, alive or dead, in order to fill the void created within them. Although initially having a strong objective, most hollows later eventually become beings solely driven by the instinct of devouring a strong soul. However, some percentage of stronger and more malevolent Hollows can often maintain part of their intelligence, making them a dangerous foe. The masks worn by all Hollows are made from the hearts they lost as Humans.

The raw impulse that remains in a hollow after the loss of its heart is protected by this mask, which also helps in hiding the Hollow’s true identity. The mask of each hollow vary in shape and form, but they are mainly all white and skull-like. The mask can be damaged, allowing the Hollow to reclaim its previous identity for a short time, although the mask just comes back after the Hollow takes control again.

In What Episode Does Ichigo Become Full Hollow?

Ichigo Kurosaki becomes a full hollow for the first time during the course of two episodes in the 14th Season. It is the 6th episode and 7th episode of Season 14 or the 271st episode and the 272nd episode of the total series and is respectively named Ichigo Dies! Orihime, the Cry of Sorrow! and Ichigo vs. Ulquiorra, Conclusion! These episodes cover the second part of The Fake Karakura Town arc and are mainly about the fight between Ichigo Kurosaki and Ulquiorra. To know the events that led to Ichigo’s transformation, keep on reading the detailed summary of the episodes.

A Summary of Episode 271

The episode begins as a continuation of the fight between Ichigo and Ulquiorra. Orihime Inoue is shocked beyond belief when a powerful attack led by Ulquiorra flings Ichigo over the tower. Snapping out of her shock, Orihime desperately tries to save Ichigo but is stopped by Ulquiorra, who cruelly tells her that it’s pointless to do so. An undeterred Orihime runs to Ichigo only to be heartbreakingly shocked at the extent of his injuries. At the same time, Uryu starts attacking Ulquiorra in an attempt to buy Orihime time to cure Ichigo’s injuries.

However, all is for naught as Ulquiorra, who is simply way too powerful for Uryu, deftly blocks all of the blows without much effort. Orihime tries her best to pull herself together from the shock of seeing Ichigo’s grave condition as she had never even wondered in her wildest imaginations that a time would come when Ichigo could die. The situation continues to worsen as Uryu, who is easily overpowered by Ulquiorra, keeps on getting repeatedly whipped by the latter’s tail. A terrified Orihime screams with all her heart for Ichigo to wake up and save Uryu from the wrath of Ulquiorra.

Ichigo, somewhere deep within his soul, registers the painful and urgent cries of Orihime and wills himself to wake up and save her. Ichigo, fueled by his strong desire to protect Orihime, comes back to life but not as a human. He comes back to life as a full hollow completely overtaken by his emotions. Ulquiorra becomes stupefied at this point and wonders about the possibility of Ichigo coming back to life. Instead of responding, Ichigo draws out his Tensa Zangetsu and lets out a loud Hollow-like roar. Ulquiorra immediately understands that Ichigo is beyond the capability of human understanding and wastes no time launching a powerful attack. However, he is shocked when Ichigo not only deflects the blow but appears behind him to cut off his left arm.

Although Ulquiorra is surprised at the sudden turn of events, he isn’t bothered by Ichigo’s display of strength due to the possession of strong regenerative abilities. Thus, he uses said powers to heal back his left arm to the original state, all the while stating that not unlike other Arrancar, it was his regenerative powers that made him a strong foe rather than his brute strength. He cockily claims that even as a hollow, Ichigo cannot defeat him. Ulquiorra projects blow after blows at Ichigo but are simply overwhelmed by the latter’s speed.

Despite his earlier claims, Ulquiorra is simply outmatched in his combat with Ichigo. The episode ends with Ulquiorra finding himself facing into the face of Ichigo, who lands a strong strike due to which he drops to the ground in front of an awestruck Uryu and Orihime and declares that losing to a Human-turned-Hollow is simply something that he cannot accept.

A Summary of Episode 272

The next episode, amongst other scenes, is a continuation of the fight. As Ichigo charges a Cero, an injured Ulquiorra compliments his strength and accepts his defeat stating that at this point, Ichigo should seal the deal by killing him as he has no other reason to live. Ichigo fires the Cero at Ulquiorra at point-blank range, causing a tremendous explosion. Still, in his Hollow form, an unreasonable Ichigo throws unconscious Ulquiorra to the ground, who has more than half of his body blown away by the explosion. Driven only by his instinct to protect Orihime, Ichigo approaches Ulquiorra to finish him off but is stopped by Uryu. Not even recognizing him in his hollow state, he throws his Zanpakuto into Uryu’s stomach.

As Ichigo is about to assault a Cero, Ulquiorra appears behind him and cuts off one of the Cero’s horns, causing the Cero to implode and break Ichigo’s mask, restoring him to his human form. When Ichigo comes back to human consciousness, he becomes shocked at the destruction he has caused. Ulquiorra pulls Tensa Zangetsu from Uryu’s body and tosses it to Ichigo, demanding that the fight be finished. He remains mute when Ichigo asks if he is responsible for Ulquiorra’s severe injuries.

As Ulquiorra begins to fade into ash, he realizes he’s dying and asks Ichigo to finish him off, or the fight would never be deemed over. When Ichigo declines and says he doesn’t want to win this way, Ulquiorra shows his growing interest in Humans, despite the fact that Ichigo never does what he wants or expects. When Ulquiorra reaches out to Orihime to inquire if she is afraid of him, Orihime says no and tries to take Ulquiorra’s hand, but it begins to dissolve into ash before she can grasp it. Realizing what a heart is from her gesture, he fades away.

Also read: Bleach Season 17 Anime Set for Renewal, Here’s What We Know So Far Regarding the Release