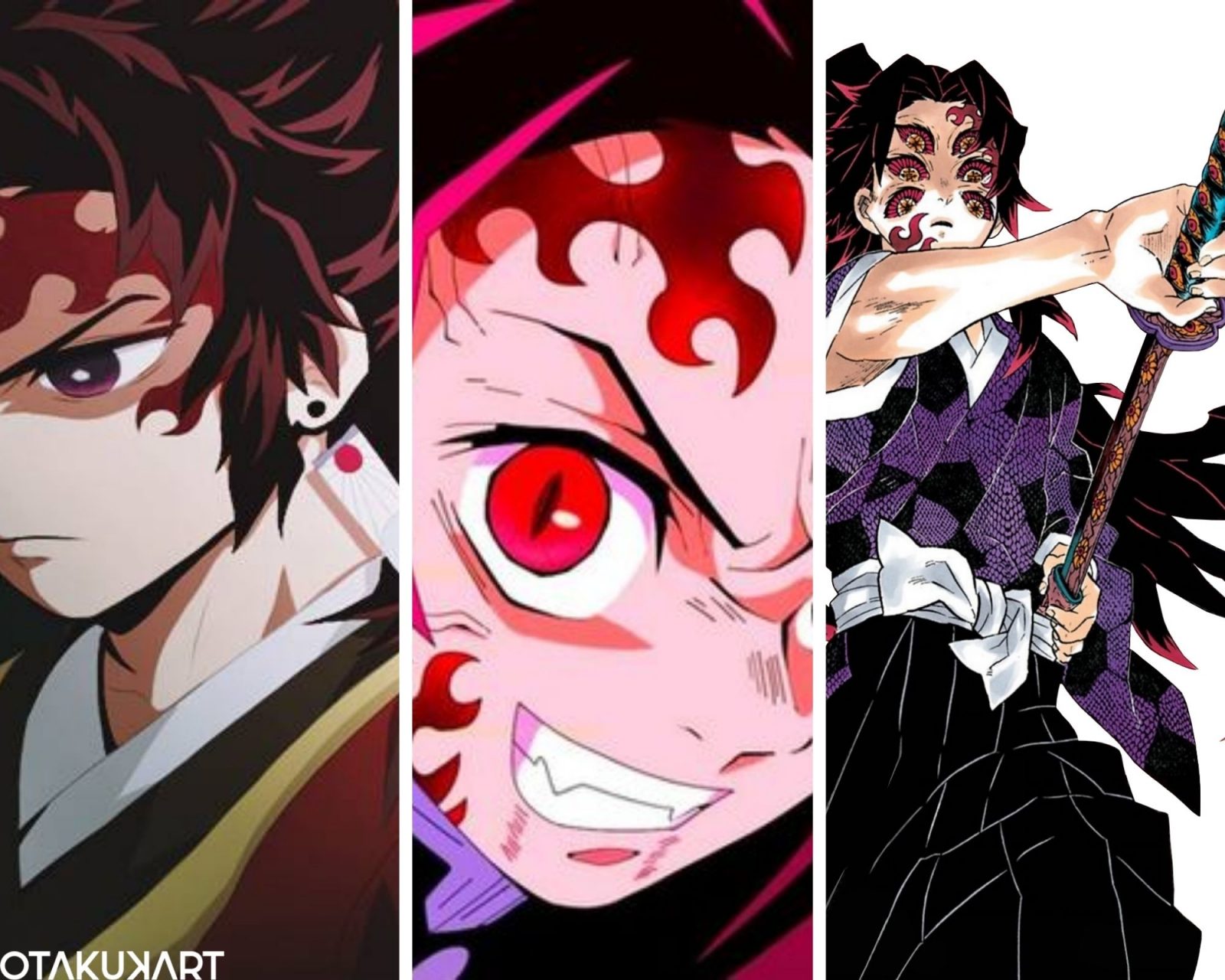 For Demon Slayers to kill demons, they have to go through hellish training of both body and mind. As weighing such a large responsibility has its own risks, Demon Slayers are put in constant danger, for they have to protect themselves and others. To simply put, it takes a great effort to be a demon slayer. Keeping that in mind, not any Demon Slayer can fight Muzan. Muzan is a special case. To kill him, a Demon Slayer has to be special too. But how can one identify a special Demon Slayer from a non-special one? Are there any criteria? What is the Demon Slayer Mark? Do the Demon Slayers need to accomplish something to kill the common enemy, Muzan?

What are Demon Slayer marks?

It has been believed that during the Sengoku era, there were swordsmen who were the users of the first breath. They were one step away from killing Muzan. And they all had Demon Marks or Crests on them. Some generations should also be able to remember this knowledge because it has been passed down. Gyomei has known all this time.

This much was certain because the information about the marks became hazy with time. However, one thing was certain: Once one person has that mark on them, it starts spreading to others, as if they’re resonating. The first one to have this mark is Tanjiro Kamado, as per Amane Ubuyashiki’s report.

According to what Amane shared, there are high chances that other Demon Slayers members may also have one. The criteria for it and who gets these marks are the things we need to know.

What Are The Criteria To Get A Demon Slayer Mark?

When Tanjiro was asked about the same, he said that it is actually a burn mark. While saving his younger brother, Tanjiro burned himself which is why he believes that this is actually a scar and not some mark. This is what anime fans know as of yet. In chapter 128 of the series, when Tanjiro was asked about it again, he confessed, “It was like gaaah and whiooo and my belly went rumble rumble..”

Amane might have shared the information about the marks, however, she asks Tokitou and Kanroji if they are aware of the criteria. Kanroji’s personality makes it harder for a normal person to understand anything, however, Tokitou explains it all. Before going through Tokitou’s explanation, let’s see what Kanroji had to say. “Back then, my body was like, super light. And uhh uhh, it was like badaaam and duuurrr and budaah! Then my heart went badum badum and my ears went screeeeee! And tikle tankle too!”

Kanroji explained it pretty well, with every detailed emotion too. Kanroji and Tanjiro, birds of the same feather flock together! Now let’s give Tokitou a chance. “If you fulfill these conditions, then maybe everyone can get these marks. So let me tell you how it works now.” In chapter 129, Tokitou explains the criteria required for obtaining these marks. A body temperature of around 39 degrees celsius and a heart rate over 200 BPM is the required criteria to obtain the Demon Slayer mark. A situation where you will either live or die is required to test your capabilities for the mark to appear.

Now let’s see who are the Demon Slayers to get this mark.

Also Read: Which Characters Will Die In The Demon Slayer Final Battle?

The legendary Demon Slayer who once killed Muzan, Yoriichi Tsugikuni, was the first to behold the Demon crest. For unknown reasons, Yoriichi was born with the mark. And with his mark came an equally extraordinary prowess. Yoriichi was also the younger twin brother of the Upper Moon One, Kokushibo.

After the Demon mark appeared on Yoriichi, many Demon Slayers had marks appear on them too.

When Kokushibo was human, he was also one of the first breath users. Having such extreme skills and other qualities, Kokushibo’s strength was further enhanced after he became a demon.

Ever since then, Kokushibo had his Demon Crest or mark, which not only made his skill improve but his strength increased drastically.

After the mark did not appear for ages, it first, after such a long time, appeared on Tanjiro’s forehead. As of now, we know that while he was trying to save his younger brother from getting burned, Tanjiro got burnt in his brother’s stead. However, after the Swordsmith Village Arc, when he was questioned again, his explanation was beyond human understanding.

Every time Tanjiro fights demons and he faces death-like situations, Tanjiro’s scar would enlarge. This was especially noticeable after the Hashira training arc.

In the Swordsmith Village Arc, when Gyokko and Hantengu attacked the village of swordsmiths, Muichiro Tokitō had his mark appear on him. As he mentioned, Muichiro really had a hard time. He was cornered by Gyokko’s attacks until he had almost given up on his life.

Remembering what his family was like, what his father taught him, how his childhood went like, what Tanjiro said, and the way Oyakata-sama treated him, Muichiro surpassed his limit. Without any doubt, his body temperature rose, and his heart rate increased. Meeting the criteria made it possible for him to reach this stage.

Mitsuri, too, had her mark appear in the Swordsmith Village arc. Her Demon Crest appeared on her neck. While fighting with Hantengu, Mitsuri’s life flashed before her. She was reminded of her old days when she was considered ‘different.’

Girls are expected to behave in a certain way. With that notion in mind, Kanroji decided to change herself when she was set up for marriage. However, her partner rejected the marriage interview in a rather cruel way. Despite being a skinny-looking girl, Mitsuri was actually a lot stronger. After losing consciousness for a few seconds, Mitsuri was back in action. And her movements were a lot faster than before.

While Shinobu had little to no time to think about her Demon Slayer mark’s appearance, her mark was more butterfly-like.

In the Final Battle Arc, as Shinobu had encountered Doma, Upper Moon Two, she met the required condition in her fight, which resulted in her unconsciously awakening the Demon Slayer mark.

Genya’s special ability makes him special too. His overall appearance changes the moment he intakes other demons’ flesh or things related to them. In the Final Battle Arc, chapter 172, after Genya ate the hair that was cut off and the broken piece of the sword of Kokushibo, his appearance changed.

He, too, had the mark over his forehead, just like other Demon Slayers and Upper Moon One. Genya’s western gun transformed, and he could even use the Blood Demon Technique.

Gyomei knew that all Demon Crest or Demon Slayer mark holders die at and/or before the age of 25.

He knew, and he still lived, past age 25. Gyomei’s marks are different. His Demon Crest is kind of cracked, emerging on both of his forearms. He had a cracked earth-like pattern, which is different from other Demon Slayers.

In the Final Battle arc, Sanemi, along with others, fought the Upper Moon One. His Demon Slayer mark appeared on one of his cheeks. While Genya and Tokitō were having a hard time dealing with the Upper Moon One, Sanemi came just in time. True that his movements were skilled, but not enough to defeat Kokushibo.

Sanemi was fatally injured by the time Gyomei came in to help. Sanemi remembered his past, and his urge to defeat the demon enabled him to set his limits higher. In chapter 170, Sanemi enters the battle scene once again.

Also Read: Will Sanemi Die In Demon Slayer? All About The Kaze Hashira Shinazugawa Sanemi

While fighting with Upper Moon Three, Akaza, Giyu had his mark appear on him. With the same criteria as Tokitou, Sanemi and Gyomei, even the Water Pillar had his Crest appear on him.

As Tanjiro was fighting the Upper Moon Three, he was heavily injured. Giyu was pushed back, and Akaza targeted Tanjiro throughout. This made Giyu angry, and his reflexes were even smoother that the Crest appeared on him now.

Obanai suffered the most damage, and when he was about to get defeated, he stood up. He fought. He prevented any major injuries on Tanjiro. He held Mitsuri for the very first time and one last time.

Also Read: Will Iguro Obanai die in Demon Slayer? The Fate of The Snake Pillar