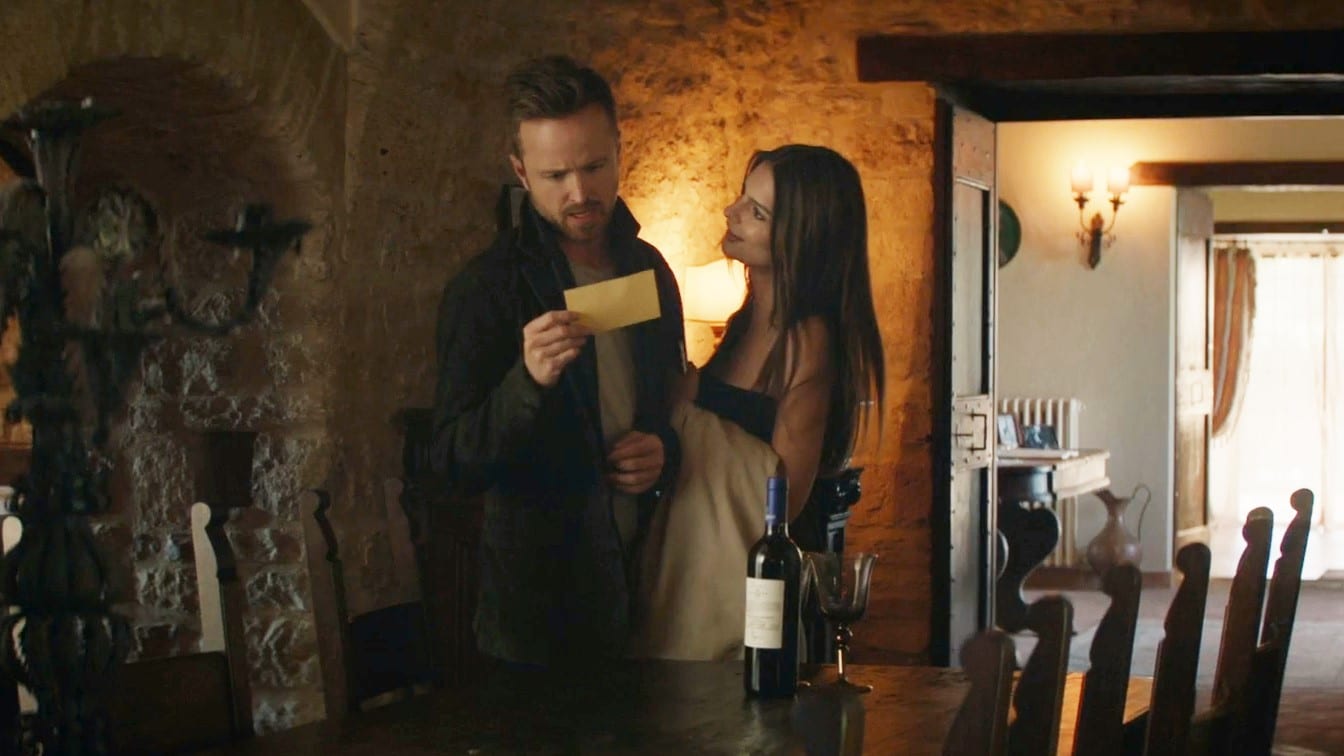 Welcome Home by George Ratliff is a drama thriller that deals with the devil figures that intend to ruin relationships. These come up in people’s lives as the “harmless” figures as they sow the seeds to amplify the tension among such couples. The objective is to break them apart as they try to steal one-half of them as their own. As a couple starred by former ‘The Breaking Bad’ star Aaron Paul and ‘American Model and Actress’ Emily Ratajkowski have troubles in their relationship, they try to mend it. For this, they plan a romantic trip where they find the devil in their lives played by Riccardo Scamarcio. The film has been out for a few years now, even so, there are some lingering doubts among viewers. Let’s have Welcome Home Ending Explained.

Welcome Home‘s story deals with the idea of drama fueled by the invasion of privacy. All of us fear people observing us without our knowledge. This fear is instilled deep within us where we fear people even having observed us for five minutes. Now, imagine what people could do if they had complete access to witness whatever you may do in the close confines of your home. This generates a fear that comes close to Bong Joon-ho’s Oscar-Winning Parasite. Along with the fear, we see confrontation, action, and blood. To come to know how a person may just know more about you than you have led is a chilling sensation indeed.

What Happens in Welcome Home?

Fredrico, The Devil in Disguise

When Cassie goes out for a run, she falls down hurting her uncle. As she was looking for help, she encounters an eloquent, charming man named Fredrico. He helps her out while also giving her a ride back to the villa on his truck. Here, he even offers Bryan and Cassie a ride to the town the next day. During the ride, Bryan observes how Fredrico would look at Cassie with eyes filled with lust. Disgusted by getting to know this, Cassie chooses to head back home while Bryan spends his time at a bar. Here, Fredrico drugs Bryans as he employs two women to help Bryan to a hotel room. Being drugged, Bryan has sex with both the women but fails to recollect any such event. After this, Bryan simply takes a taxi back to the villa. 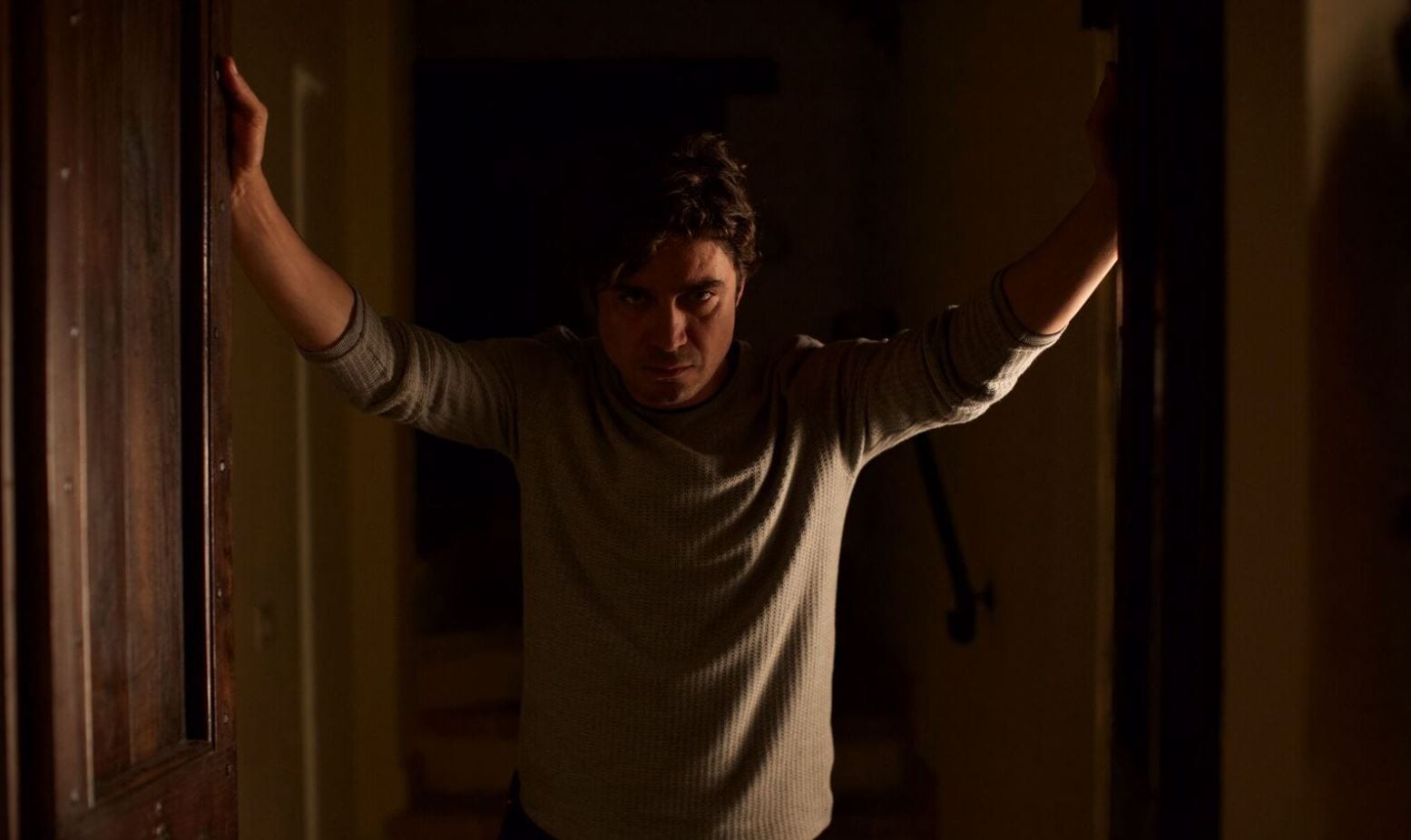 It slowly starts to become apparent how Fredrico was a sinister person who happened to have secret cameras all over Bryan and Cassie’s villa. He has been watching the two making use of it to make his moves in their lives at moments of crisis. Fredrico primarily aims to visit the villa when Bryan is missing, nevertheless, Bryan so discovers that Fredrico wasn’t their neighbor like he claimed he was. While Bryan does inform the owner of this, he threatens Fredrico of telling the same to Cassie. But here, Bryan is threatened by Fredrico to tell cassie how Brayan had sex with two women at the hotel. Bryan had no recollection of the same denies it. Later, at home, Bryan tells Cassie the truth surrounding Fredrico which Cassie finds hard to believe. She doesn’t feel creepy vibes from Fredrico until he cooks a rabbit stew for them. 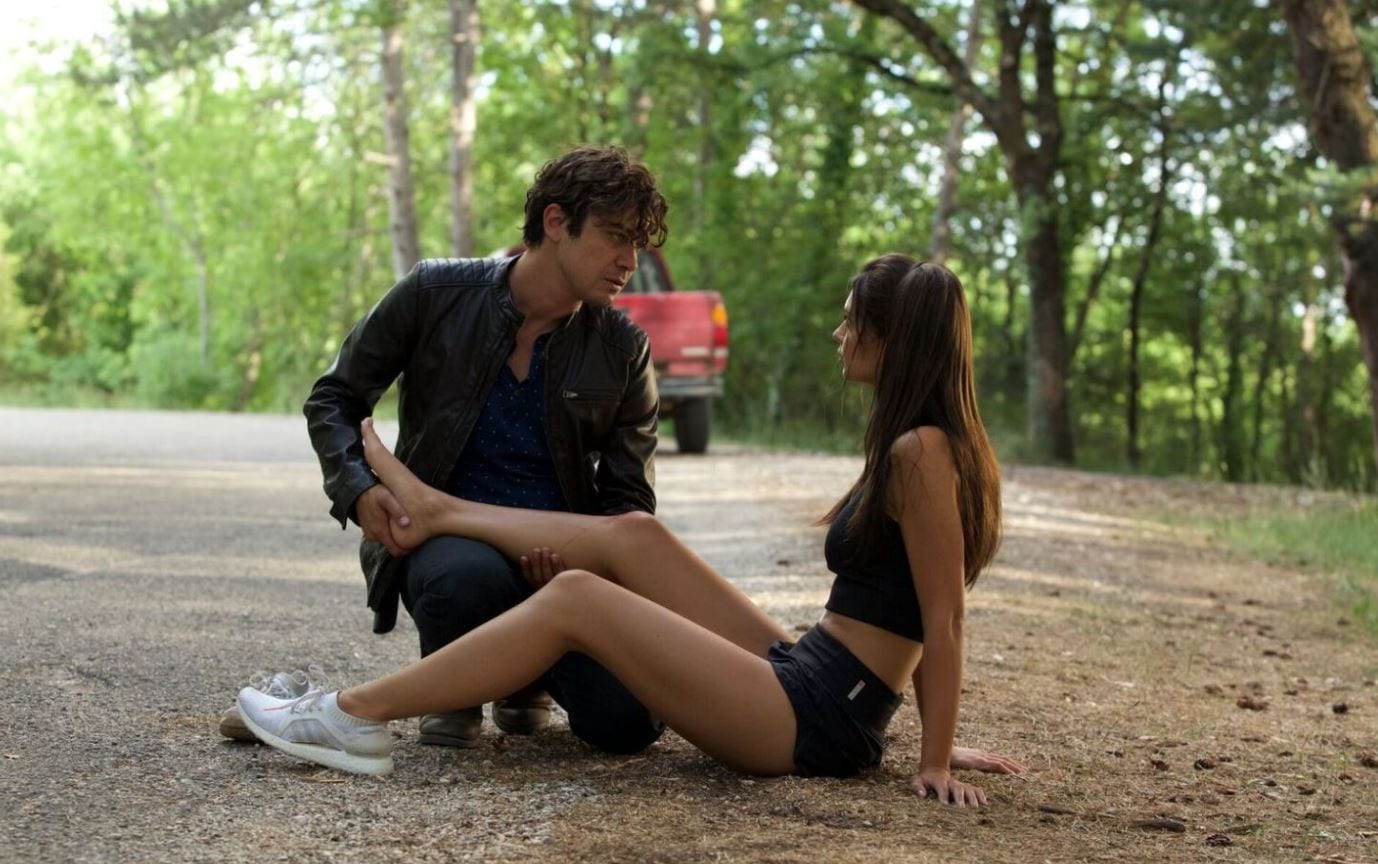 Cassie being helped by Fredrico

Fredrico sees all of this through his cameras where Bryan and Cassie finally seem to be making up. To do this, the couple plan of having sex but Fredrico who was disgusted by this had his own plans. He locks Bryan in a cellar as he leaves a note for Cassie asking her to put on a blindfold. Thinking that the note was from Bryan, she does so. But Fredrico enters the room instead where he starts kissing and groping her. But soon, he hears that Bryan has managed to get out of the cellar so he plays a video of Bryan back at the hotel and leaves. Cassie takes off her blindfold and watches a video of Bryan cheating on her with two women. She gets dressed after which she encounters Bryan to erupt an argument between the two.

Both of them start accusing the other over infidelity when Cassie chooses to throw her phone at Bryan. But it instead hits a mirror as it reveals a hidden camera. This is when the two realize how Fredrico has been watching over them the whole time. Having been found out, Fredrico decides to take Bryan out using a knife, As the two start to wrestle, Cassie picks a walking cane and strikes it over Fedrico’s head stunning him. But instead of stopping, Cassie chooses to keep hitting him repeatedly, thus killing him. Fearing that the murder will be found out, Fredrico has a plan in mind but then a car pulls over. Quickly concealing the murder any way they can, the two check the visitor to be Mr. Eduardo, the owner of the villa. 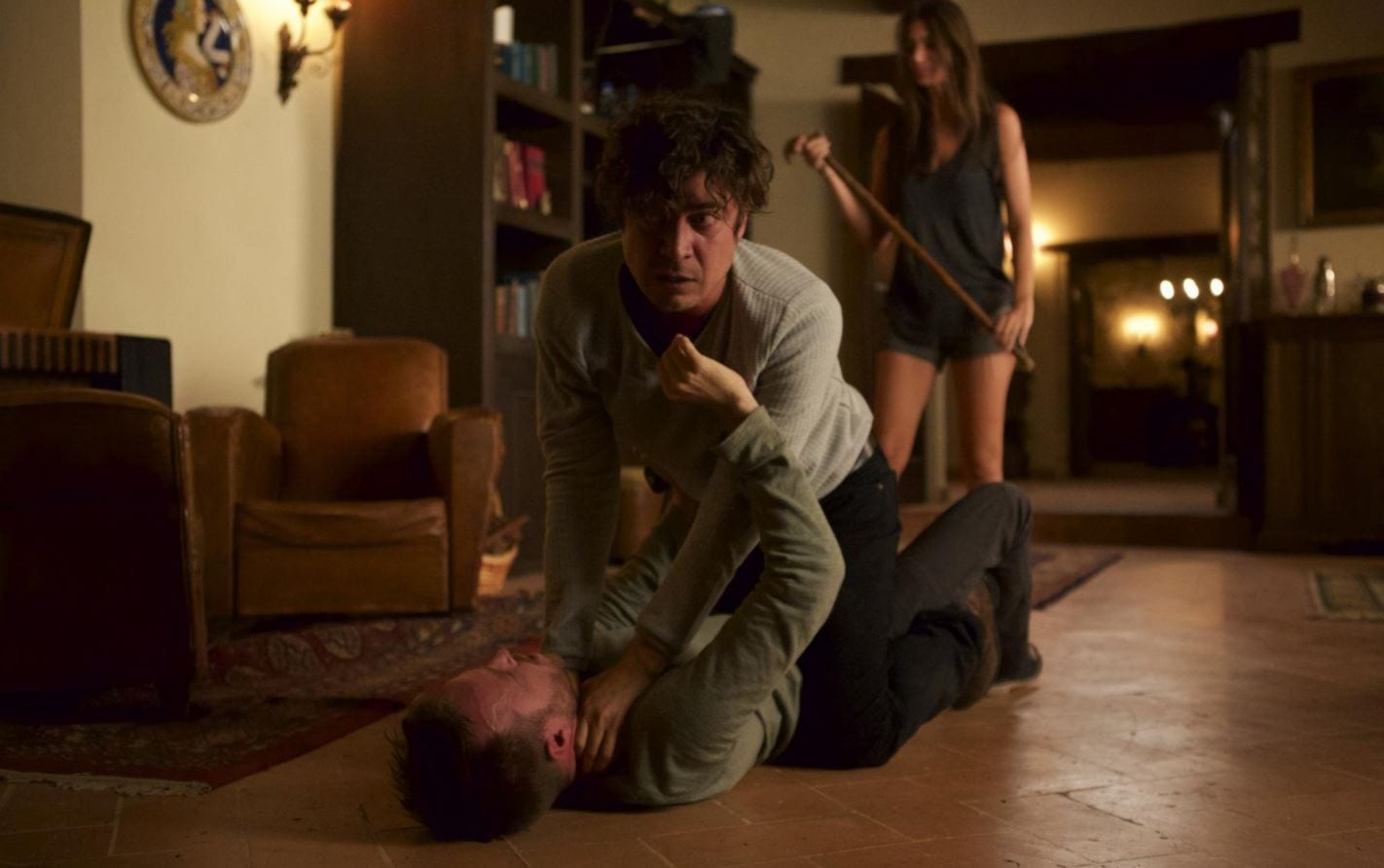 What Happens in Welcome Home Ending?

Bryan tries to fend off the owner by telling him that everything was okay now. Nevertheless, he decides to enter the home. Bryan and Cassie start to panic as they feel that they may have to kill Eduardo as well. This is where we learn that Eduardo was part of Fedrico’s plans. They both were accomplices as Eduardo knew about the cameras. He directly heads to the Computers where he learns how Cassie had killed Fredrico. Instead of going to the authorities, Eduardo goes to Cassie to have her confess, nevertheless, Bryan attacks him from behind. Eduardo quickly turns towards him as he takes out his gun.

Eduardo tries to have the couple confess to the murder but Cassie instead chooses to stab Eduardo. Then Bryan hits him with the cane taking his gun and shooting him dead. Later, as the couple buried the bodies, they find out all the cameras and computers and take them down. Unfortunately, they miss out on a camera that has been implanted as an eye to one of the gnomes in the garden. Unknown to this, both swear to not tell anyone of this as they finally have sex. In the meantime, people worldwide happened to be horrified as they watched the bodies being worried through their computers.

Welcome Home Ending Explained: Do Bryan and Cassie get Caught?

In Welcome Home Ending, Bryan and Cassie try to cover up the crime scene as they bury the bodies and burn all the possible evidence they could find. But out of these, they fail to find a gnome implanted with a camera. This camera records all that happened in the garden which was sent as a live feed to a website called “Eye See You”. Here the users are able to view the pirate lives of any tourists. And unfortunately, Bryan and Cassie burying the bodies were caught in the feed. The people who did watch this video was shocked but quickly changed to other channels. While it is always the possibility that the couple gets caught, it hardly seems to be what happened. The people who were watching these videos themselves were committing a crime, therefore they would choose not to meddle in this affair. 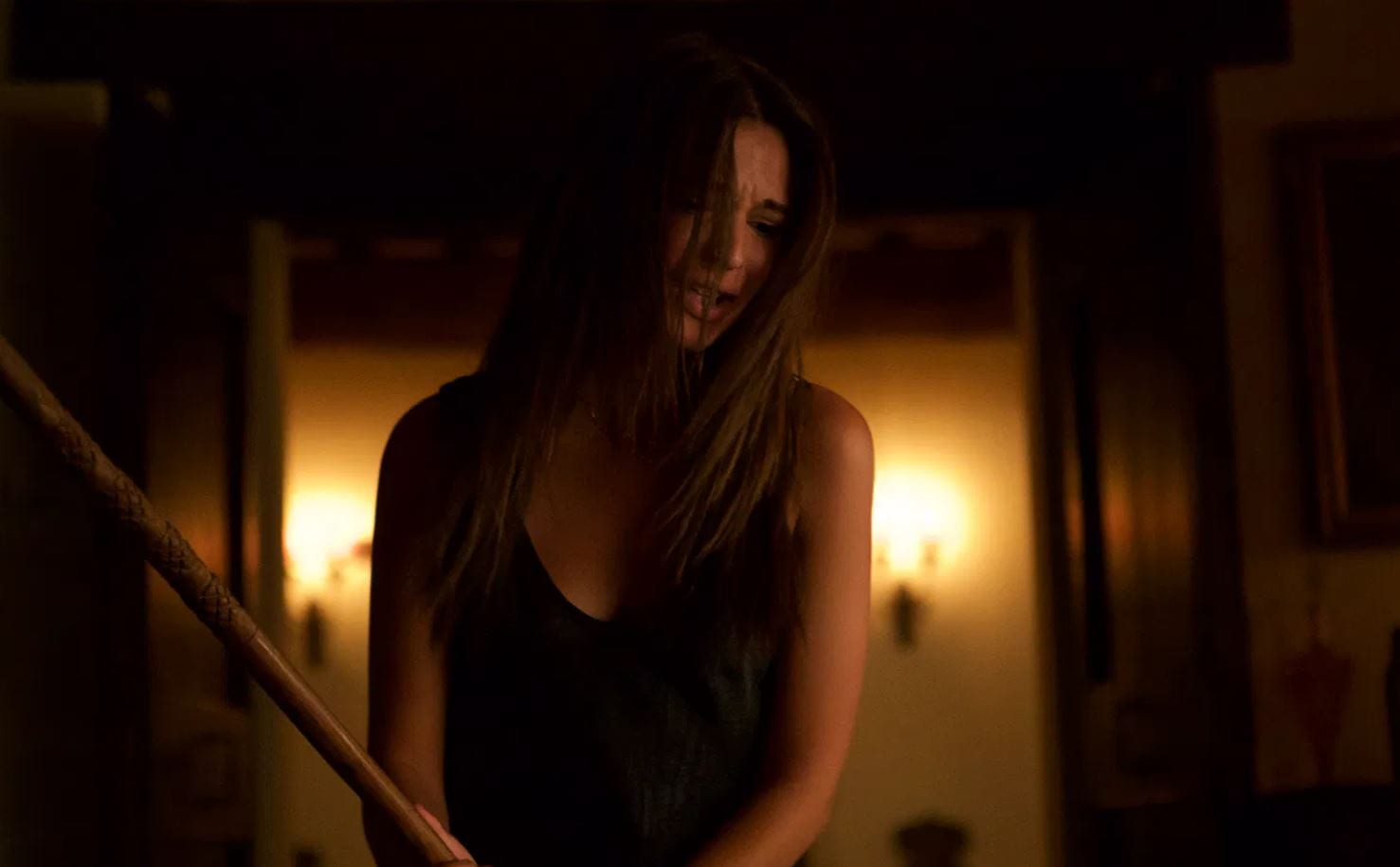 Are Bryan and Cassie able to fix their relationship?

The crack in Bryan and Cassie’s relationship originated due to the drunken sex Cassie had with her co-worker. This causes Bryan to become impotent as he would always get flashes of Cassie with someone else. So, the couple takes a trip together where being drugged Bryan spends the night with two women. Later finding out about the same, Cassie and Bryan realize that both of them have cheated on each other due to some sort of intoxication. Even so, unwilling to give up, they fight through which they find out about the cameras thus leading to the climax. This conflict brings Bryan and Cassie back together as they are seen having an intimate shower session with one in the ending of Welcome Home.