Gwang Nam and Hee Ok break up and a mysterious man enters Hee Ok's life. He claims that he is Ha Ru's father but he does not have any proof of it. 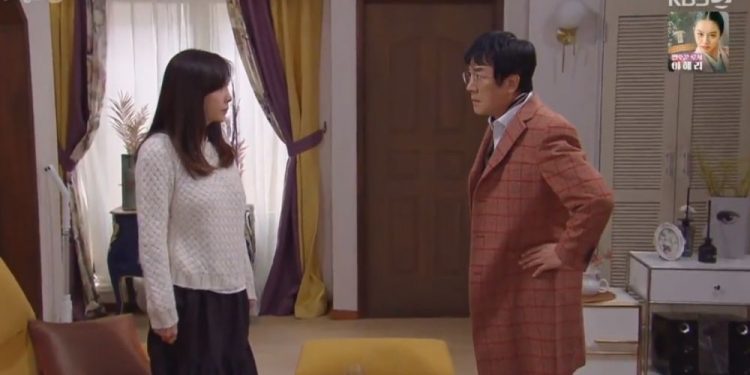 Ha Ru and So Ri decide to keep their relationship intact even after discovering their parents’ affair. Yoon-ah thinks that now that the investor has a problem with So Ri, she can invest in ‘Twist’ and be with Ha Ru. However, when she finds out that So Ri is thinking of closing down the company, she is very disappointed. In ‘Love Twist’ episode 20, Ha Ru agrees to close down ‘Twist’ and meets a mysterious man.

A mysterious man named Park Ki Tae is trying to find Hee Ok. No one knows his history with her, but he keeps pursuing her through other people. Later, he visits Hee Ok at her apartment and confronts her about Ha Ru’s father. He is under the presumption that he is Ha Ru’s father. This happens just after Gwang Nam breaks up with her.

Till now, we have seen that So Ri and Ha Ru find out about their parents’ affair. This makes them furious, and they decide to cut ties with Gwang Nam and Hee Ok. When Ha Ru visits his mother, he tells her to treat him like a stranger as he does not want his relationship with So Ri to be considered wrong. Embarrassed about her father, So Ri is not ready to face Ha Ru. After the fight with her father, she has nowhere to go, so finally, Yoon-ah takes her in. Surprisingly, Yoon-ah changes her behavior considering the situation, and she becomes considerate towards So Ri’s feelings.

Gwang Nam visits Ha Ru late at night and tells him that he doesn’t disapprove of him because of his mother. However, Ha Ru responds by saying that it does not matter if it is because of his mother as he does not consider Hee Ok his mother anymore. Hearing this makes Gwang Nam furious, and he tells Ha Ru that he was not being a good son. As the argument escalates, Gwang Nam says that Ha Ru is a lowly person and his kind cannot be with So Ri.

An unknown man approaches Dong Man and drags him to go drinking with him. He introduces himself as an investor, and this intrigues Dong Man. After they are many bottles down, Dong Man reveals all the information about Hee Ok, Ha Ru, and So Ri’s family. The next day he couldn’t remember what he said, but he was sure that it wasn’t good. The mysterious man’s name is Park Ki Tae, and he has an undiscovered relationship with Hee Ok. Ki-Tae also approaches Kyung Joon and tries to find out more about Ha Ru. Could this man be Ha Ru’s father?

So Ri’s grandparents are on a trip, and there they meet a medical attendant who specializes in nurse service. Her name is Do Hee, and her colleagues do not like her. We cannot say for sure if they are jealous of her or suspicious of her. However, we get to know that Do Hee lives an alternate life where she has a lot of money, and the other medical attendants find it very strange. Back at home, So Ri decides to shut down ‘Twist’. She thinks that Ha Ru will flip out because of this decision, but he supports her.

The ‘Love Twist’ episode 20 will be released on 7th January 2021. In the upcoming episode, Gwanh Nam and Hee Ok become emotional while breaking up. He is upset that he couldn’t keep his promise to her. However, this is the best decision for their children. Later that day, Park Ki Tae visits Hee Ok at her apartment, but she does not recognize him. The big revelation comes next when Ki Tae confronts Hee Ok, saying that Ha Ru is his son. Hee Ok rejects his claim and says that Gwang Nam is Ha Ru’s real father.

Where To Watch ‘Love Twist’ Episode 20?