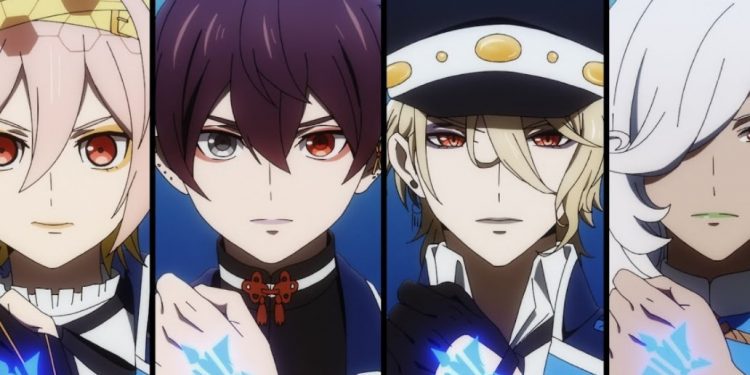 Visual Prison has concluded its first season after releasing twelve episodes. The anime might have left the fans with questions since Ange Yuki achieved his goals, and he was left with accomplishing some of his dreams. Visual Prison concluded a few weeks ago, and we are bout to find out if the anime will return with another season. Let’s talk about Visual Prison’s latest episodes and other anime updates. In the previous episode, Yuki met with vampire idols that stole his heart and realized that he dreamed of becoming a vampire idol.

Yuki knows that he is a half-human vampire and wants to fulfill his vampire’s wish. Yuki notices something strange and feels weak while losing his human form. Gil arrives and rescues Yuki before turning into a vampire, the former famous vampire idol. Yuki realizes that he knows that guy and falls unconscious. Gil was glad that Yuki controlled his vampire instincts and took him to his vampire hideout. Yuki woke up and was surprised to see a lady vampire in front of him. Yuki learns that the lady vampire is taking care of him.

The lady vampire told him that her name was Eve, and Yuki introduced himself. She helped him recover since he was a little dizzy. Eve repaired food for everyone, and Yuki has a lot of questions since he has no clues about how he reached the house. Eve reveals that Gil brought Yuki last night since a strange incident occurred during the show. Yuki was curious since he saw someone that resembled Gil and wondered where Gil was. Eve told him that Gil was taking a shower and they could enjoy breakfast.

Yuki enjoys staying at the vampire hideout, and Gil meets him in the kitchen. He was surprised to see his idol, and Gil told him to relax. Yuki thought that he would stay for a night and then leave. But Eve told him that they wouldn’t let him go since he had learned about the vampire hideout and their way of living. She explains the vampire’s rules and what happens when a human enters the vampire house. The vampire believes that when humans enter their territory, they become one of them. Yuki accepts those conditions since it was his dream to become a vampire idol. But he wonders why Gil is a retired vampire idol.

Yuki didn’t bother to ask since he had recently arrived at the vampire hideout. Gil and eve teach Yuki their way of living and how he should behave when meeting other humans. They also told him the punishment he would receive if he broke the laws. Yuki followed everything they told him and began writing songs since he believed he would perform at a big event one day. One day in the morning, he heard someone humming the song he was singing and wondered who is that with a beautiful voice.

Yuki learns that it is the famous Robin Latife, and they take him in, but Gil is not happy. Robin went out and lured the devouring vampire that almost killed them. Eve saves them and reveals how her vampire powers work. Yuki also learned about his past and how his parents died. Gil reveals that he worked with Yuki’s parents in the past. Yuki and Robin get to know other vampire idol groups and compete with them on the stage, and after Yuki convinces Gil to rejoin the group. The Oz performed, and Yuki reunited all the vampires since his vampire wish was fulfilled.

Will There Be Visual Prison Season 2?

Also Read: Ryman’s Club Episode 1: All To Know About it.