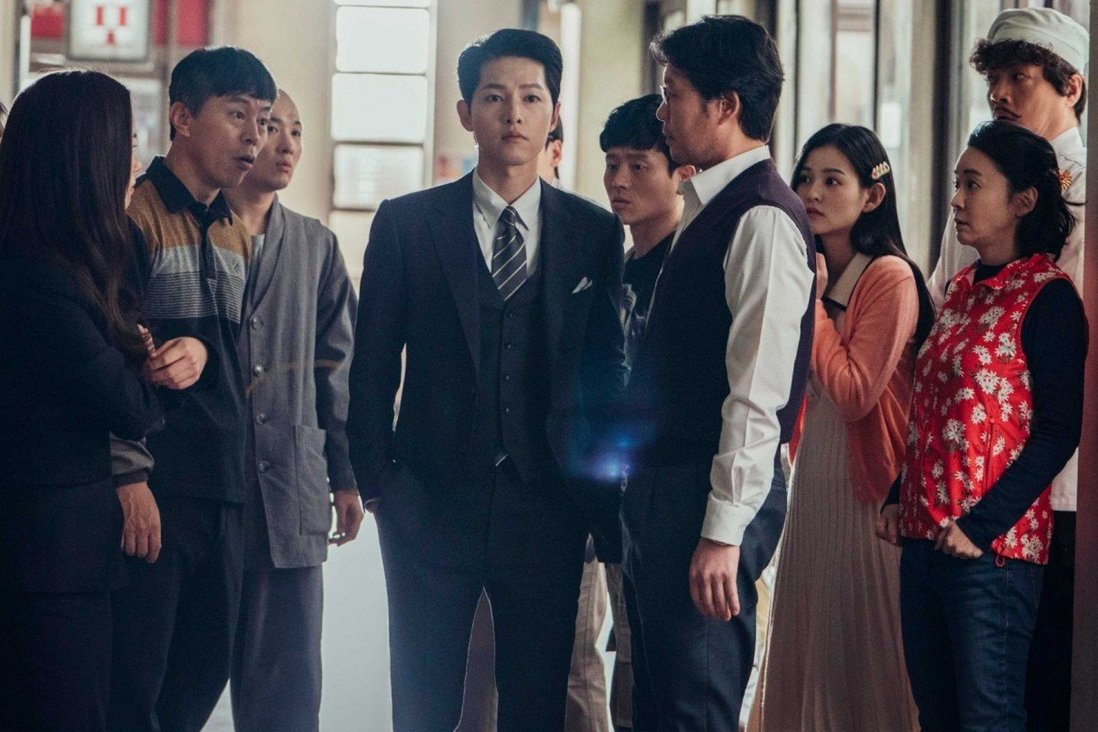 The ongoing South Korean drama Vincenzo is taking the internet by storm. Vincenzo episode 10 and 9 are about to release very soon. All the fans are eager to know what happens next and how exactly the story will unfold. Episode 9 will air on 20th March 2021. At an early age, Park Joo Hyeong went to Italy after being adopted and as an adult changed his name to Vincenzo Cassano. He is now a popular Italian lawyer and is known by his name Vincenzo Cassano. Vincenzo has his unique style to deal with things and often threatens the person about his weakness or murder to win a case. The drama involves dark comedy and is getting hue love from Korean fans all across the globe. 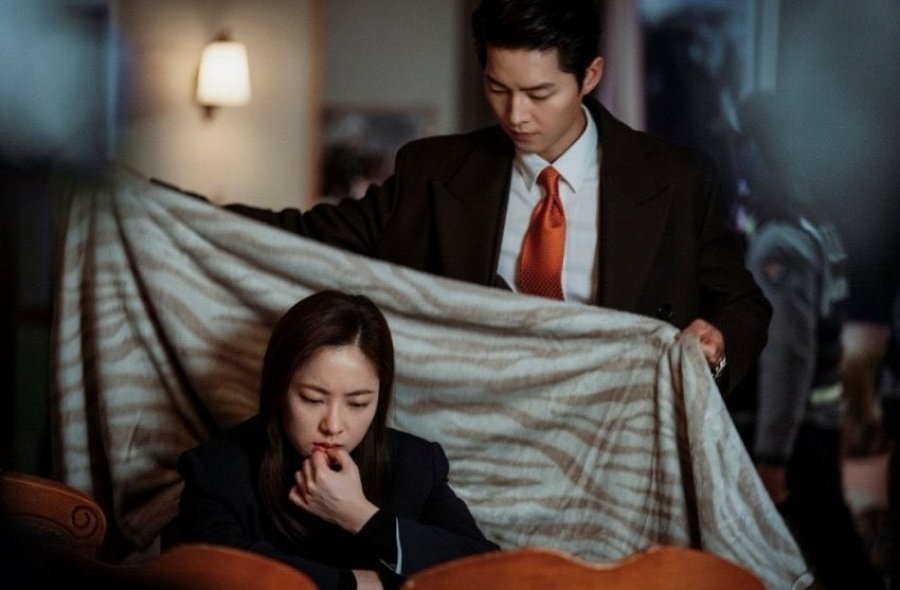 A still from the K-Drama Vincenzo

The absolute new pairing of the actors Song Joong-ki and Jeon Yeo-Bin is well appreciated and acclaimed by the audience. The internet storm doesn’t seem to stop any day soon with the two stunning actors together in a drama. Vincenzo has a total of 20 episodes and we are awaiting eagerly for each new episode to come. The star-studded drama is totally eye candy and is worth watching. If you are a true K- Drama fan this is a must for your list

The official trailer of Vincenzo was released on 9th February 2021. The trailer starts with the lines of Vincenzo-” If we were in Italy right now you would be composted in a vineyard by now” The stylistic representation and aura that Soon Joong Ki puts in his role makes us go weak in the knees. With utter charm and grace, we see Soong Joong Ki in the trailer as Vincenzo. We also get a glimpse of Jeon Yeo Bin and Ok Taec Yoon with a sense of comedy and mystery involved in the air the drama surely promises the power pact performance of the three main leads. The trailer hints to us about encountering a very strange neighbor and that only evil can punish an evil.

A Quick Summary of previous episodes

Vincenzo Episode 1 was aired on 20th February 2021. The episode opens with a cool description of Vincenzo and his life 72 hrs before in Italy and how circumstances lead him to Korea. The police stations get alerted that Vincenzo has arrived in South Korea. We see Vincenzo having a hard time adjusting to Korea and curses Korea. Vincenzo portrays an extremely cool character and has some insane activities around him.

Vincenzo Episode 2 was aired on 21st February 2021. The episode continues to add up the coolness of Vincenzo and the whole episode revolves around a building that belongs to Vincenzo and how he takes it back, several threats come in the way he was tried to be killed but was fortunately saved. Vincenzo is warned about the demolition of Geumga Plaza and intends to contrive the attack.

Vincenzo Episode 3 was aired on 27th February 2021. The episode shows us the tenants enjoying the stopping of the demolition and Vincenzo enjoying the party. Hong Cha Young is eager to speak to Vincenzo about his interruption in the whole matter of what does the building has in respect to him. Vincenzo’s answers look something fishy to Hong Cha Young who isn’t convinced. While Choi Myung Hee shows her true colors, episode 3 slowly unveils the details of each character.

Vincenzo Episode 4 was aired on 28th February 2021. The episodes make us feel that Vincenzo is becoming softer after coming to Korea, but seems like he has become wittier and cleverer. The real war begins and Vincenzo uses Choi Myung Hee’s strategies against her. Vincenzo survives the truck attack and further infiltrates the pharmaceutical lab for Babel and sets it on fire. 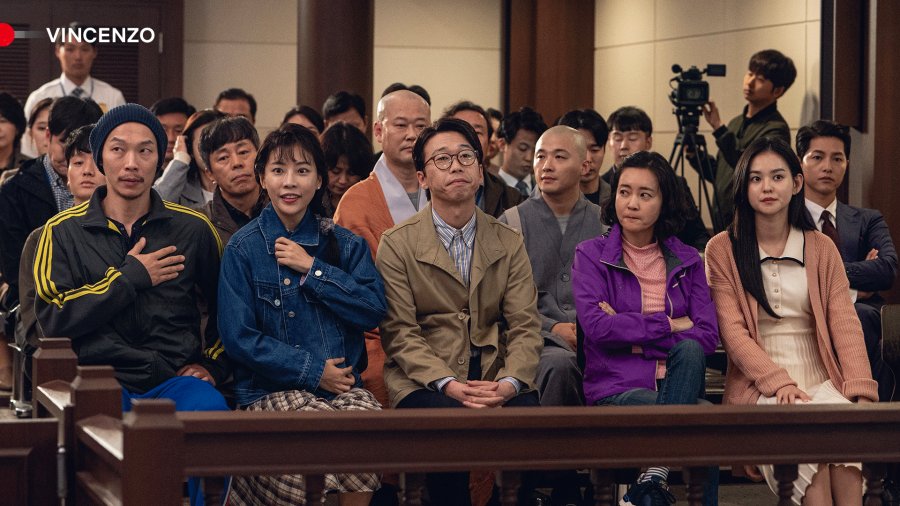 A still from the sets of K-Drama Vincenzo

Vincenzo Episode 6 was aired on 7th March 2021. The episode shows us few more twists and the heat of the case infuriates both inside and outside the courtroom. Meanwhile, Choi Myung Hee and Han Seung Hyuk are introduced to the CEO of babel chemicals. Things heat up between the lawyers and which works fine according to the plan of Vincenzo and Hong Cha Young. The trial gets delayed which acts in favor of Hong Cha Young. But after she loses her witness and uses Vincenzo as a surprise witness and as her trump card. It leaves the audience in mystery as to what happens next.

Vincenzo Episode 7 was aired on 13th March 2021. The show gears up for new twists and turns after Vincenzo turns up as a witness while the tenants gain more and more appreciation for their building. Vincenzo provides acute details about the case and holds up a cell phone having important proofs against the Babel Chemicals. The lawyers are not the ones to be messed with and are always on their toes to defeat the opponent.

Vincenzo Episode 8 was aired on 14th March 2021. The show turns out to be entertaining for the most part as Vincenzo tries to charm a young bank president for his ease in investigating the Babel chemicals. He is angered by the delay in justice and tries a hand in his own ways. The tenants again occupy themselves in a fight where Hong Cha Young and Vincenzo rushes to the police station to free them. Meanwhile, we see Hong Cha Young gaining feelings for Vincenzo, and the chemistry between the two leads spices up. The tenants show a video for their defense that the fight was initially started by the babel group and later on celebrate their victory.

Also Read: What to Expect From Vincenzo Episode 4? 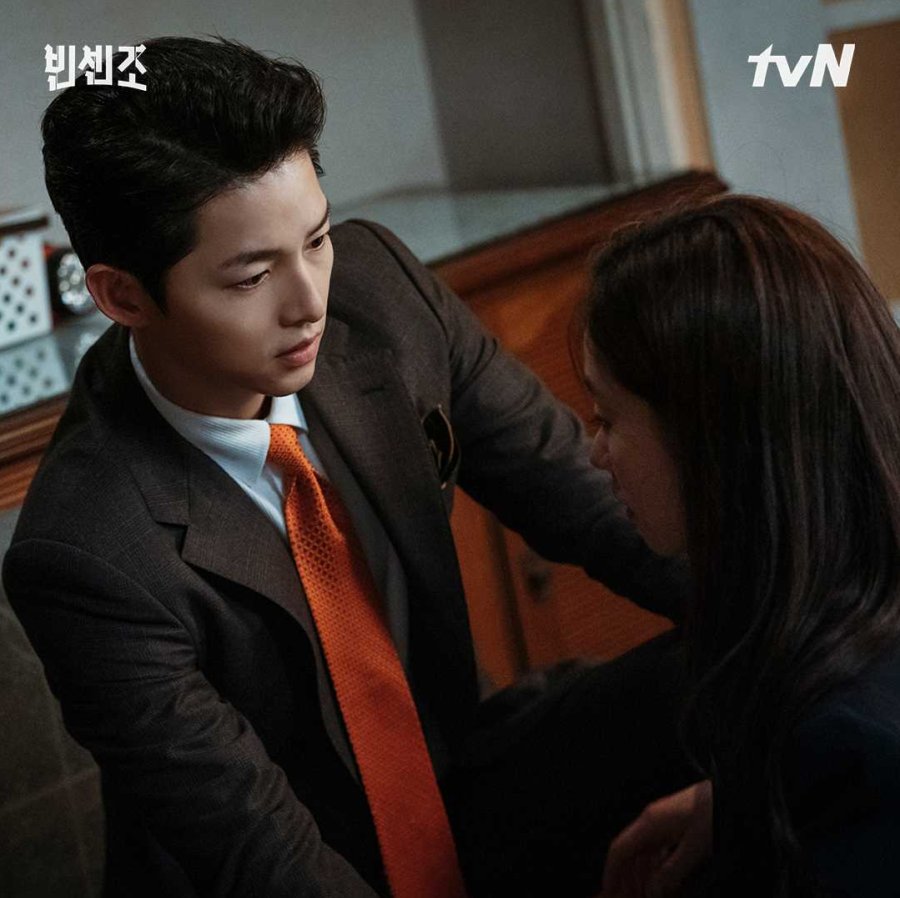 A still from the K-Drama Vincenzo

Vincenzo episode 9 aired on 20th March 2020 and is a continuation of the 8th episode from where it initially left. Vincenzo steps closer to the gold day by day and the series reaches almost halfway. Jang Jun Woo is impressed by Vincenzo day by day and intends to disclose his real identity soon. Hong Cha Young grows fond of Vincezo and clearly realizes her attraction towards him. After a break in Hong Cha Young finds helping hands from Vincenzo and stays in his apartment. Jang Jun Woo twists his power to incline more loyalty from his partners.

Vincenzo Episode 10 will air on 21st March 2021, which is too soon and the ones eagerly waiting for the action compact episode don’t have to wait long. The promo of the 10th episode is quite promising and keeps us high on our tows to know more about the show. We are now at a point where we always want to know what happens next. Each episode is 0f a duration of almost 1hr25mins and will air on the original network tvN along with the global platform Netflix. It will air on Sunday at tvN at 21:00 KST. We can expect a lot of action sequences from the 10th episode with some interesting revelations.

The cast Of K-Drama Vincenzo 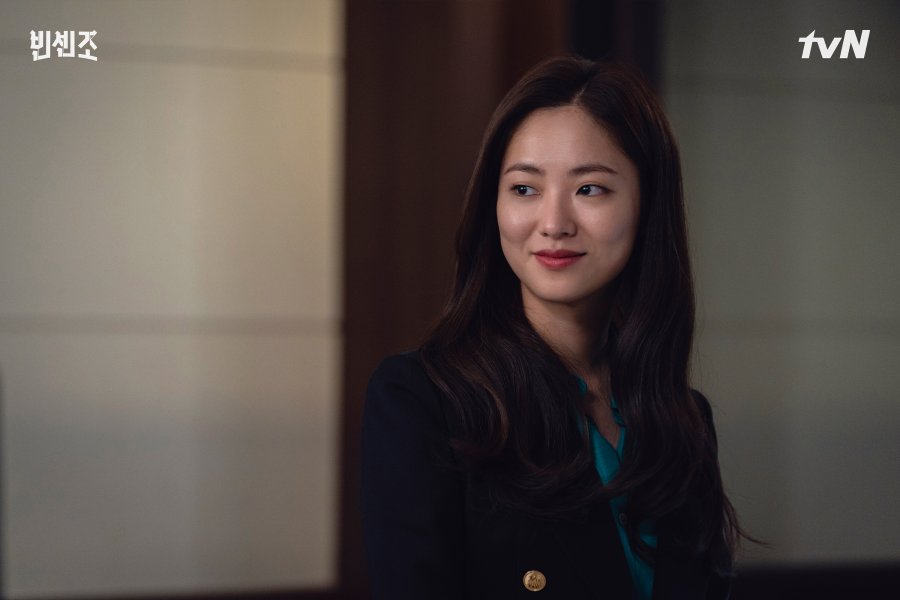 The lead actress of the K-Drama Vincenzo, Jeon Yeo Bin

Where to Watch K-Drama Vincenzo

The ongoing South Korean drama Vincenzo can be watched on Saturday and Sunday on the original network tvN. It airs On tvN at 21:00 KST and is also internationally available with subtitles on the global platform Netflix. So, tune in to Netflix anytime to watch your favorite drama, Vincenzo.

The drama will go off-air on 25th April 2021 and is also popularly known as binsenjo. The genres of the drama include romance, comedy, law, crime, and drama.