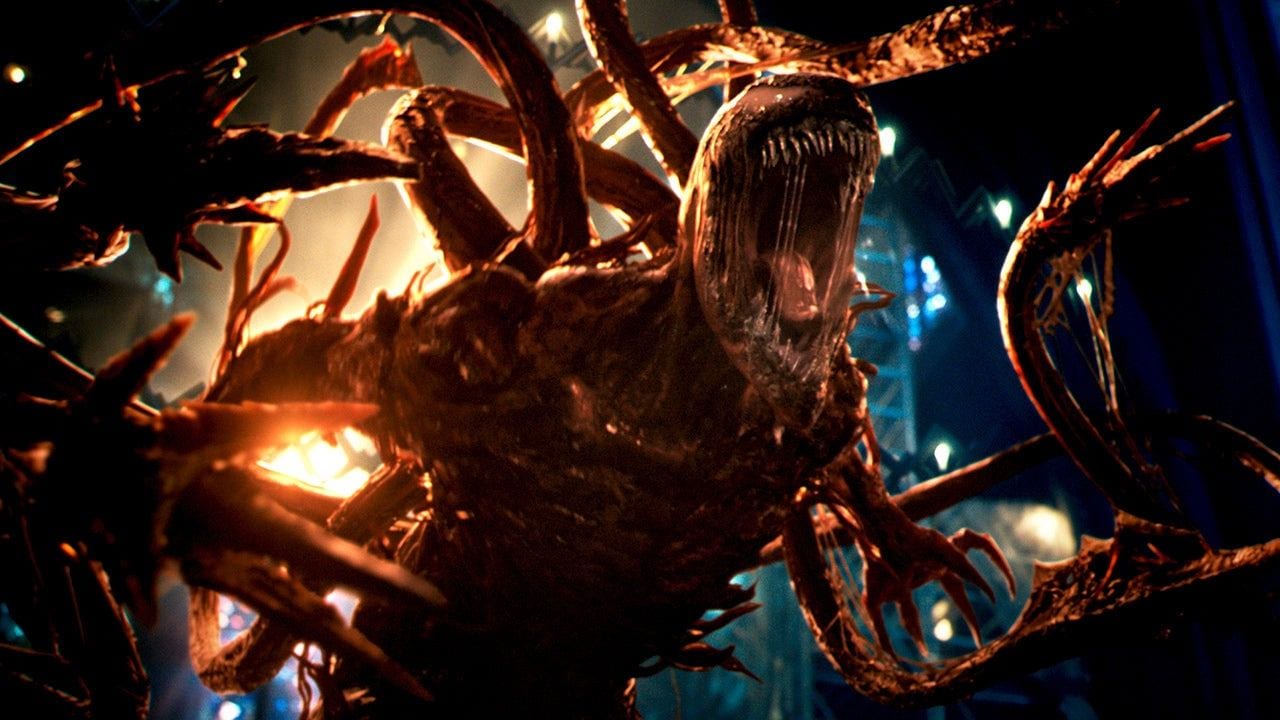 After a long spell of anticipation and leaked set photos, the official peeks at Venom 2 are finally out. And boy does it look fun. It sure does, it seems the sequel to the successful Venom (2018) is going to amp up the ante. Tom Hardy is back as the archenemy of Spiderman and the host to the Symbiote, Venom. After hopping around, wreaking havoc, and gobbling villains’ heads, the duo is back, this time confronting a truly nutso antagonist. The trailer for Venom 2: Let There Be Carnage was released on May 10, 2021, delighting fans worldwide. The nearly two-and-a-half-minute trailer gives fans a lot to chew and dissect upon. Eddie and Venom’s relationship seems to have grown to roommate status. The sequel also seems to have built the world of Venom a bit further. And finally, we see Cletus Kasady and Carnage in action.

Venom (2018) ended with Eddie going to the high-security prison to meet Kasady and interview him. Woody Harrelson is back to realize the foreboding sense of high octane carnage he teased us with back in 2018. And it seems that the campy, fun energy from the 2018 movie is also back. Venom 2 is directed by the talent powerhouse Andy Serkis. Not long after the trailer dropped, a breakdown by Serkis was also released. The director also breaks down certain things, although not delving into it all that much. For the detailed breakdown, we are at your service! There is so much chaos and hidden details in this trailer, we can’t wait to talk about. So without any further ado, let’s delve into the Easter eggs and breakdown Venom 2: Let There Be Carnage trailer. 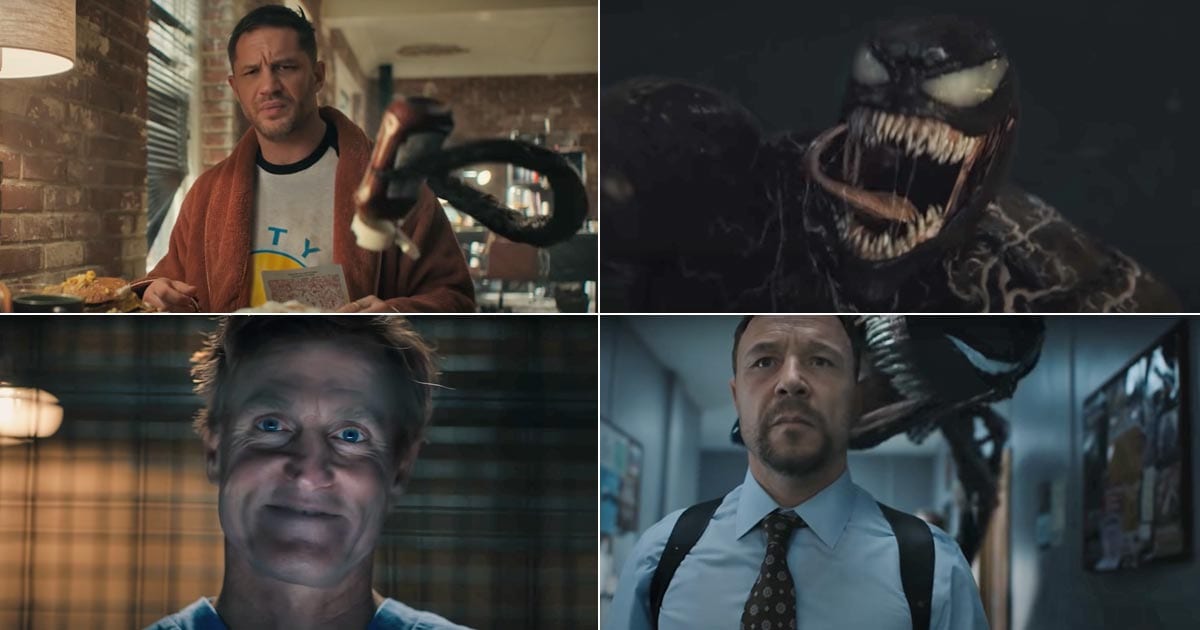 The cast of Venom 2: Let There Be Carnage.

The trailer kicks off with Eddie’s apartment. But the apartment is a bit different now. It resembles that of a beginner hoarder. Everything is messy, and stuff is littered everywhere. Eddie’s apartment is the perfect reflection of the chaos that he embodies now, along with the adolescent Symbiote. We see Eddie trying his best to make breakfast. Meanwhile, Venom is also making another set of breakfast while jamming to Let’s Call the Whole Thing Off. The song’s significance is basically to present Eddie and Venom as an odd couple struggling to synchronize but thinking the same thing. And it seems the bromance between the Symbiote and the host has become stronger since the original film. In a hilarious sequence, they both make the same breakfast with extreme chaos. Eddie and Venom have become the perfect old married couple.

Moving on, Mrs. Chen from the first movie has become a friend of the duo. She greets Eddie and then Venom too. And she does it with such a casual attitude, it seems that she has totally adapted to this new normal. During this little cut of Eddie walking into the store, we see a cute little Easter egg. As Venom greets Mrs. Chen back, he quickly fixes a magazine on a rack. That magazine has Stan Lee on its cover. Now that Stan Lee is no more to make his adorable cameos, this fleeting moment was heartwarming. There’s another comedic scene with Mrs. Chen at the end of the trailer when she informs Venom of the chocolate deficit. If you didn’t get why Venom was so irked over chocolate, let us explain. Chocolate is explained to be a subduing agent for Venom that keeps him from eating human heads. 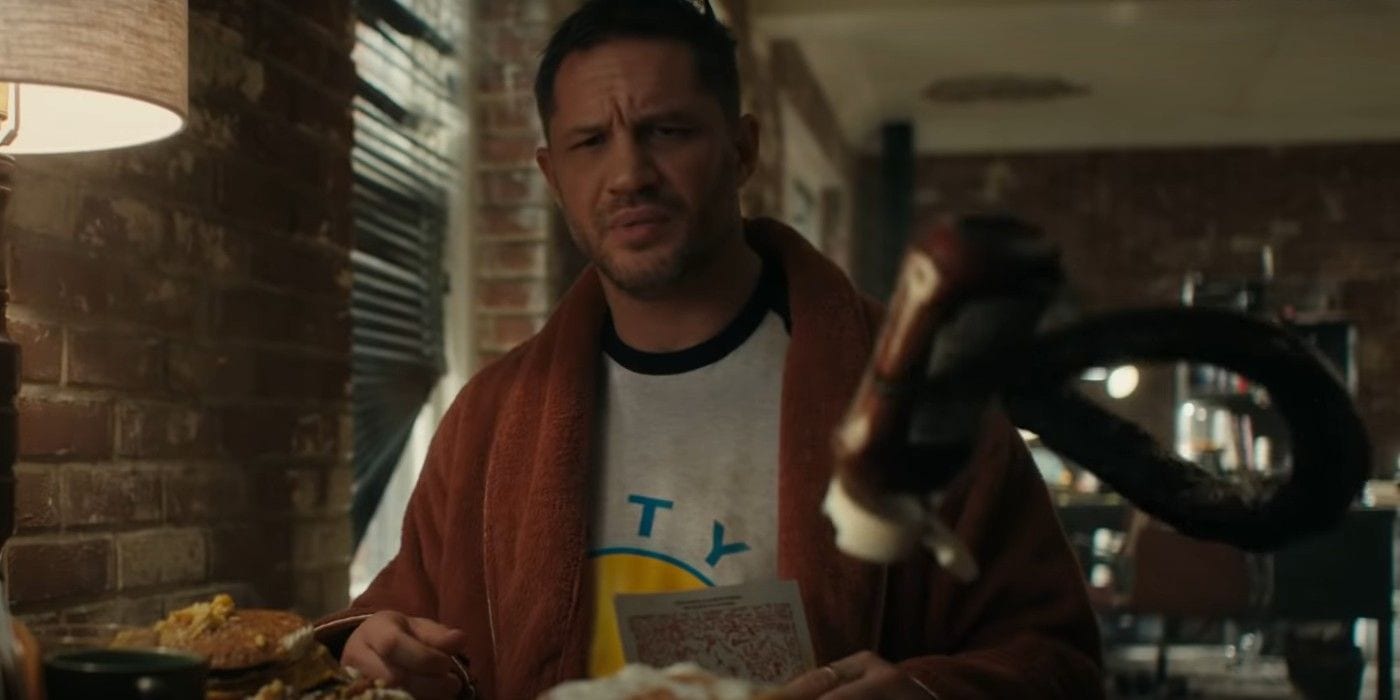 Cletus Kasady aka Carnage is Here!

Cletus Kasady is back, as promised by the end of the first film. As we see in the 2018 film, Cletus Kasady only confides in Eddie and doesn’t take any other interviews. This is because, as he claims, they both share similarities. And now it seems that Kasady is sending Eddie letters, meaning he is aware of where he lives. We see this when Eddie picks up a letter when Venom sprays him and that letter at the beginning of the trailer. The letter seems to have words written with blood, in continuity with Kasady’s habit of… doing that. As the trailer moves to Kasady, we watch him scribbling down something on a letter (probably meant for Eddie). Meanwhile, we can also see several psychotic drawings and doodles all over the cell walls.

We then see Kasady punching the walls manically and then more drawings on the walls carved by him. The drawings mostly hint at all the terrible crimes he has committed. We see references to his victims, churches, cemetery, and then more victims. These include murdering animals, kids, and just about anyone. He is very dangerous just as a human. When he was a kid, he tortured and murdered pets, murdered his grandmother, and burned down an orphanage. The orphanage might be something that we might see featured in the film as we see it burning in the trailer. Now try and imagine the abomination when Cletus merges with the Carnage symbiote. Yeah, I know, it’s gonna be bonkers! 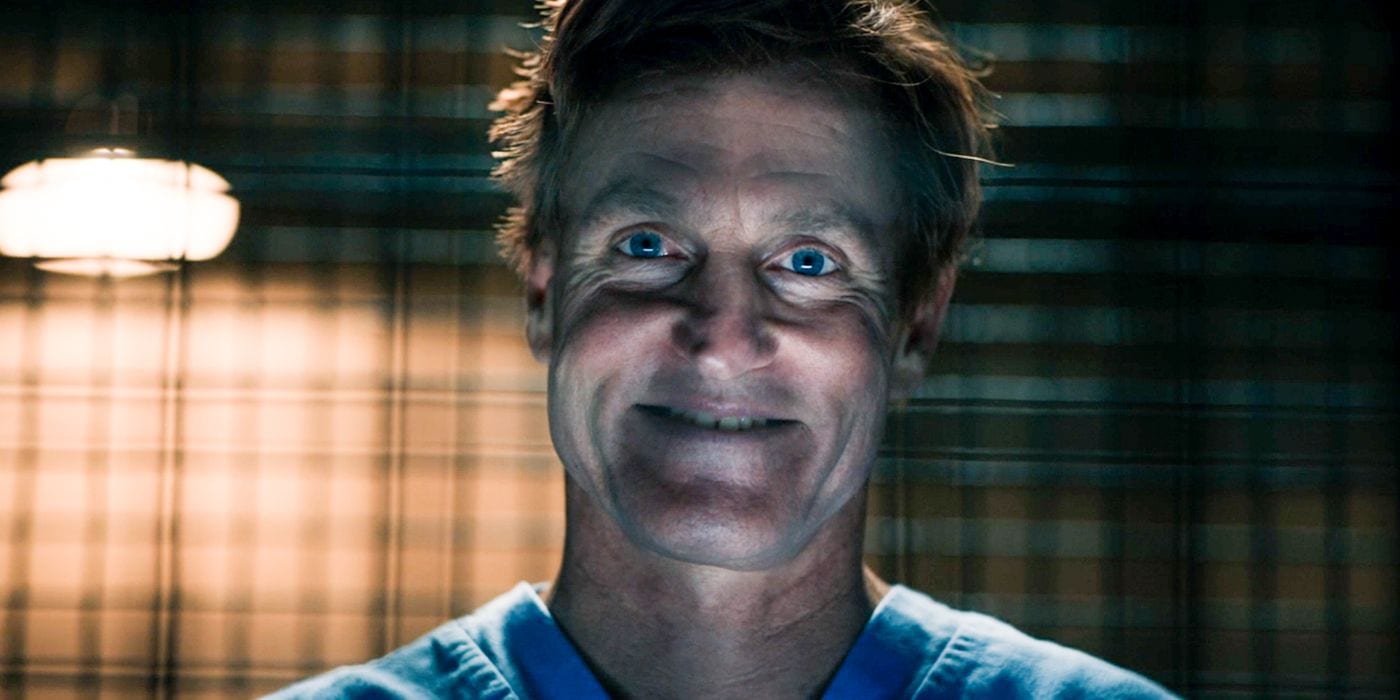 The Daily Bugle is back. We see the newspaper at several points throughout the trailer. The Daily Bugle, the long-time employer of Peter Parker, has made a comeback on the big screen. However, it’s important to not conflate this version of the print publication to that featured in Homecoming. J.K. Simmons reprised his role as the popular character of J. Jonah Jameson in homecoming. However, as the makers of Venom 2 have claimed, that version of The Daily Bugle is separate from the Venom version. While The Daily Bugle in Homecoming has become a more digital media platform, Venom 2 features its print form. We see Eddie in the trailer, working on something while there’s a Daily Bugle article about Cletus Kasady’s interview. This also tells us that Eddie’s interviews with Kasady are successful.

Another new character to look out for in the trailer is Detective Mulling. British actor Stephen Graham plays the character of Mulligan and seems salty over not getting a hold of Kasady. We see him reading The Daily Bugle and presumably Eddie’s interview with Kasady. It will be understandably frustrating for the detective to not get access to the prisoner while Eddie does. One interesting fact about Mulligan, if it comes true, is that his character may be Patrick Mulligan from the comics. In comics, Patrick Mulligan eventually becomes the host of Carnage’s spawn, Toxin. And while this might not be the course the character takes in the movie, it’d be great if it did. There’s also one quick scene where Venom creeps behind Mulligan and is about to gobble him up, apparently. It will be interesting to see how this dynamic plays out between the two. 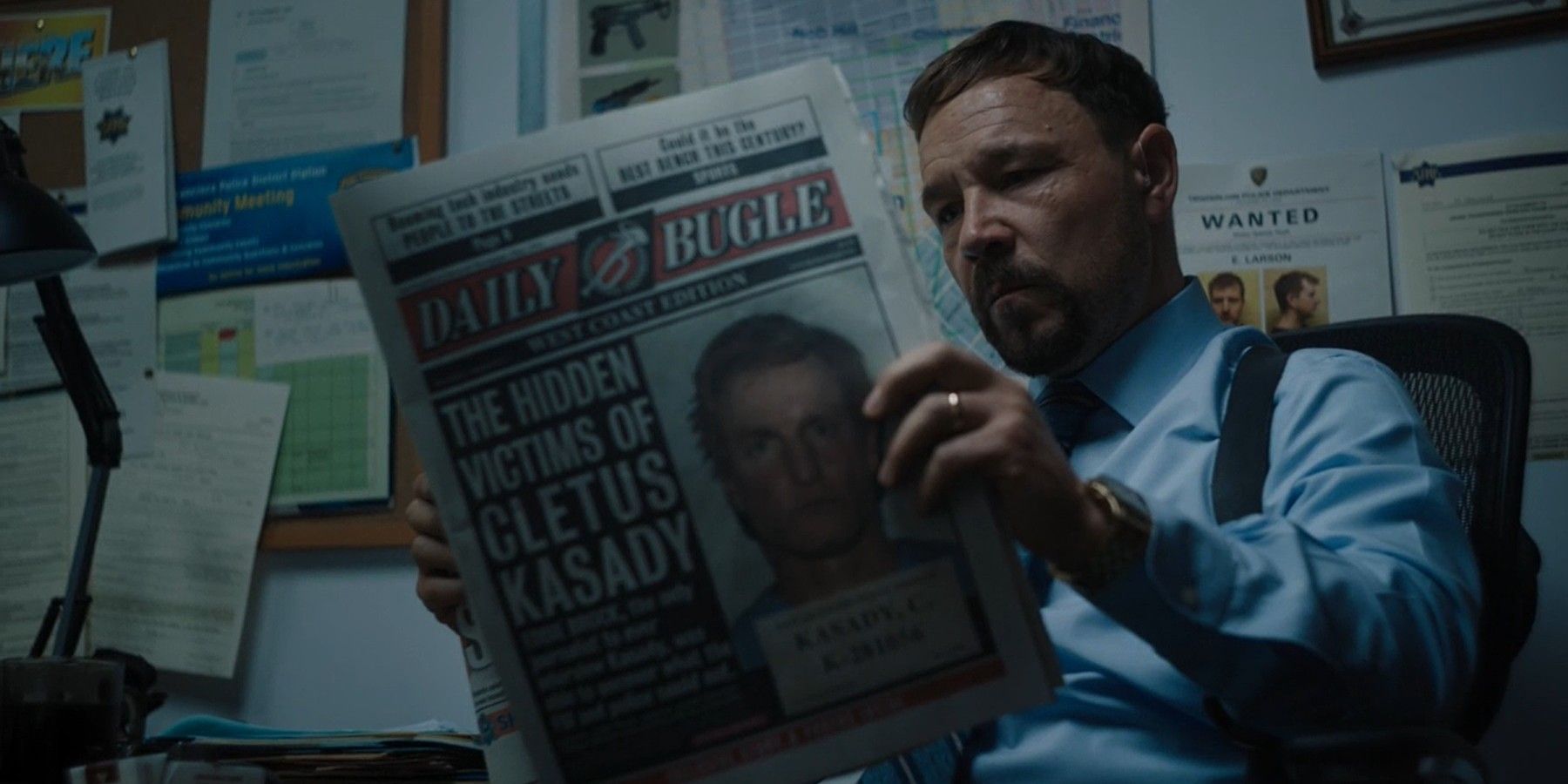 There’s an Easter egg and/or a reference to the Avengers in the trailer. It comes when Mulligan is perusing the newspaper headlines. When he angrily crumples the newspaper, we can see a very quick glimpse of a headline. We can see two words clearly that read “AVENGERS” and “NIGHTMARE”. What does the headline mean, and what does it entail? Our bet, it might just be a nod to the MCU, just an easter egg. But who knows what it might entail in the future. We already have Morbius in the pipeline, and it contains Vulture, a character from MCU’s Homecoming. As far as an actual Avengers crossover goes, it’s safe to say it’ll be limited to references and eater eggs.

Then there’s Shriek, another addition to the list of powerful characters in the film. Naomie Harris will be playing the character. In the comics, Shriek is the love interest of Carnage. Naomie will be playing Frances Barrison aka Shriek in the film. We can see her as an inmate inside the Ravencroft, an asylum for the super-villains (Marvel’s Arkham Asylum). In the comics, she was a part of many havoc-wreaking endeavors along with her love. Carnage. Together, the two villains have caused massive destruction. Apart from being Carnage’s love interest, she also has superpowers of her own. She can fly and shoot sonic blasts. We see a demonstration of her powers in the trailer. She sends the newspapers around her in a levitating fury and bellows a shriek. 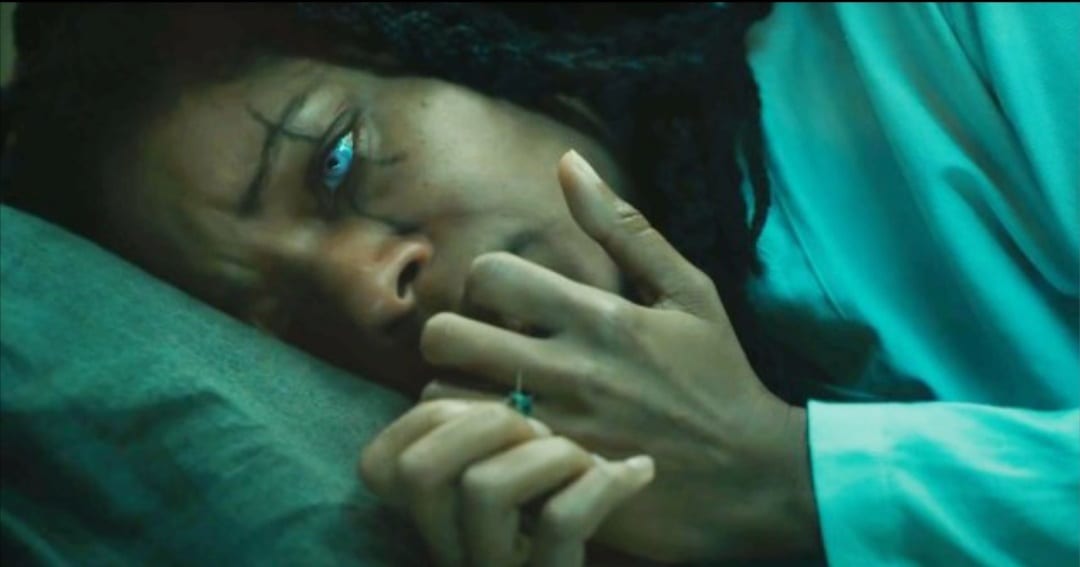 Naomie Harris will be playing Shriek in the film.

When is Venom 2: Let There Be Carnage Releasing?

Venom 2: Let There Be Carnage is looking to be a heck of a ride. With the official first look at the terrifying Carnage symbiote, we know what we’re in for. It’s gonna be double the fun and an all-around madness, now that we’ve got a symbiote mixed with a serial killer. Sony seems to be doing a rather good job with the Venomverse. Keeping up with the campy fun of these head-gobbling symbiotes, Venom 2: Let There Be Carnage looks promising. And we’re here for it! The film is slated for a release on September 24, 2021.