James and Raquel are taking everyone to Santa Ynez for their engagement party but someone else has secret plans over there! 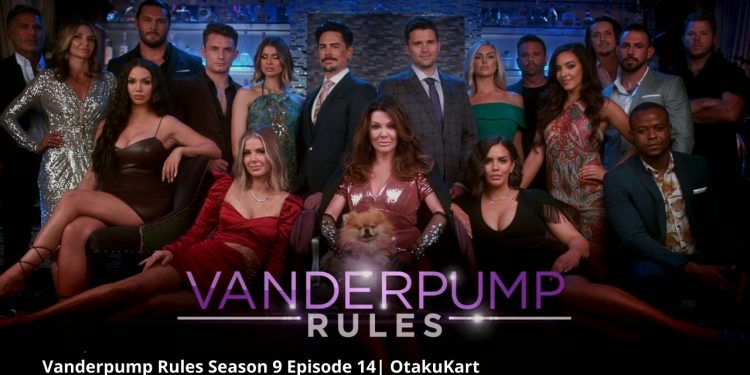 We are leaving for Santa Ynez to celebrate James and Raquel’s engagement in Vanderpump Rules Season 9 Episode 14. But engagement isn’t the only thing to take note of on this trip. There is someone out there planning a secret marriage at this event. If anyone finds out, this will entirely take away the spotlight from James as it was his and Raquel’s celebration. As fans know, James isn’t going to be any bit happy about this. So what are we exactly in for this time?

For the past few episodes, Brock has been planning to propose and marry Scheana on one single day. First, he approached Randall and Lala with the idea. The plan backfired with the venue falling upon him. Still, he hasn’t lost hope for this surprise engagement, a surprise which Scheana kinda already knows. Anyway, his new venue seems to be none other than James and Raquel’s party itself. But his recent relationship with James might only make things harder for him.

Previously on Vanderpump Rules Season 9, we opened at Lala’s, where Katie was visiting. They were reflecting on Lala’s party last night. She had concerns about Ariana not talking to her once during the party. Katie, on her side, was stuck as she is close to both of them but believes let them be in their own worlds instead.

Sandoval and Schwartz were still on break since Sandoval’s fight with Katie. Therefore they had found someone else to hang out with for the time being. Sandoval was working out with Brock while Schwartz was learning DJ from Kennedy. Both the duos were teasing each other. Lala was a little frustrated with Brock’s plan to engage and marry Scheana by surprise. She expressed it to Scheana. Meanwhile, Schwartz and Sandoval visited their new restaurant to get things going with the new plans to design it.

Coming to James and Raquel, they have been planning for an engagement party for a while. One part of it is the seating arrangement, and Raquel’s sister joined her to help her with it. Brock approached Sandoval and Ariana to tell them about his plan to propose and secretly marry Scheana at James and Raquel’s engagement party. The only thing that worries Sandoval is that if James finds out, he will be mad for stealing away their spot. Neither less, Sandoval agreed to at least go with him to buy the ring.

Katie and Ariana met Lisa to tell them about their plan for the European Gourmet Sandwich shop. They demonstrate the pitch they are planning to present to Randall. The only thing that bugged Lisa was probably the name. The episode came to close with the Progress Party at Sandoval and Schwartz’s new restaurant. At the same event, they ended their break, and with their new friendship, bands came together again.

While Schwartz and Sandoval presented their friends to their new Schwartz and Sandy’s, Lisa was concerned about the handling of it and the budget. Things took a bad turn at the party when Brock tried talking to James about controlling the smoking thing. The fight only turned things difficult for Brock as he wanted to use James’ engagement party to marry Scheana secretly.

Vanderpump Rules Season 9 Episode 14 is releasing on 11 January 2022. The episode remains untitled, but from what we saw in the closing moments of the previous episode. Well, we see Brock’s shoot for his company that is a Live Streaming Fitness Platform. Also, it seems like Ariana has abandoned Katie on their first pitch for the restaurant to Randall, and he is quite a busy person.

Also, everyone has arrived at Santa Ynez to celebrate James and Raquel’s engagement party. Brock is still on with the secret wedding plan, but Tom is a little nervous about it. We also witness another fight between him and James, and we wonder what it is about now.

Also Read: Nicky, Rebecca and Miguel Are On A Road Trip In This Is Us Season 6 Episode 2