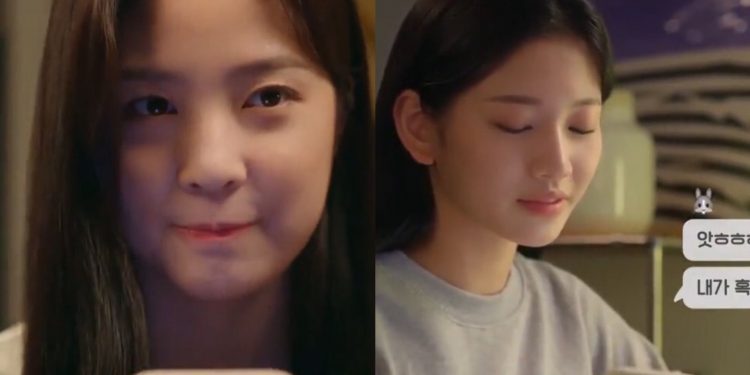 User Not Found episode 8 will show us the cuter side of Shin Sohyun and Han Yeji’s relationship. The two are on the opposite ends of the popularity spectrum. When they first meet, it’s hard for them to even hold a conversation properly. However, things seem to be getting better in the previous episodes. When Sohyun asks Yeji to help her out at first, Yeji simply declines. She thinks it is ridiculous how Sohyun is giving so much importance to these so-called ‘friends’ who she hasn’t even known for long.

Sohyun wants nothing more than to maintain consistency in her level of popularity after transferring to the new school. Everyone mistakes her for the popular Yoo Minjae from a rich background. Despite not wanting to deceive her friends, she can’t bear to let go of the feeling she has craved all her school life and is finally able to taste. She finally has a group of friends, places she wants to go with them and things she wants to do. As Sohyun and Yeji agree to swap identities, they slowly start warming up to each other.

A Recap of ‘User Not Found’

Shin Sohyun has been struggling to keep her fake identity cover afloat. As if things weren’t hard enough, Hyejun finds out about her secret and gives her more stress. However, it isn’t just him she has to worry about now. How will she manage to keep acting her part when even her classmates make things tough for her?

Jiwan seems to be envious of Minjae’s popularity and fame. She finds it weird that Minjae has deleted all her posts and doesn’t like the pictures all the friends posted and tagged her in. When her friends are discussing this behaviour of Minjae’s, she quickly jumps in and adds fuel to the fire by saying that she finds it upsetting how Minjae doesn’t seem to have opened up to them yet. This pushes the knife of doubt further into all their flesh and they slowly begin to question Minjae’s behaviour.

Yijoon is clearly upset about something from the past. He seems to have knowledge about something Hyejun did that perhaps not everyone is aware of. Despite being cousins, there isn’t any genuine warmth between them. Yijoon still seems like he is struggling with things that are disturbing him greatly. It looks like something that occurred at school which has left him with a lot of thoughts. How Long will Yijoon go on before he has to face his emotions?

One of the most entertaining section of this drama is how both the Yoo Minjae’s slowly start to support each other. Perhaps, they will end up becoming true friends by the end of the drama. Now that’s what everyone truly wants! Han Yeji overhears the conversation Jiwan has with her friends about MInjae’s Instagram and is irritated by her behaviour. She is only further aggravated when Jiwan comes over and fakes being nice to her. Thus, while pulling the same act off, she goes and accidentally (not an accident at all) steps on Jiwan’s shoes.

Episode 8 of User Not Found will be released on Saturday, 25 December, 2021. It will be the perfect watch for a cozy Christmas celebration! We can’t wait for our hearts to be warmed by more Minjae and Yijoon interactions.

Where to Watch ‘User Not Found’ Episode 8

User Not Found is being broadcasted on Viki. It airs every Friday and Saturday. Many viewers are curious to know who the secret spectator of the conversation both the Minjae’s share on the rooftop. Is it Hyejun again, or is someone else going to be in power of all the sensitive information on both the girls? Stay tuned to find out!

What to Expect From Upcoming Episodes

Shin Sohyun will experience more tough situations in the upcoming episodes. It seems like her new clique might actually be the cause of her downfall. However, the positive aspect is how her friendship with Han Yeji strengthen and how Yijoon will stat expressing himself more in front of her.

Where Is All Creatures Great And Small Season 2 Filmed? All Locations Revealed