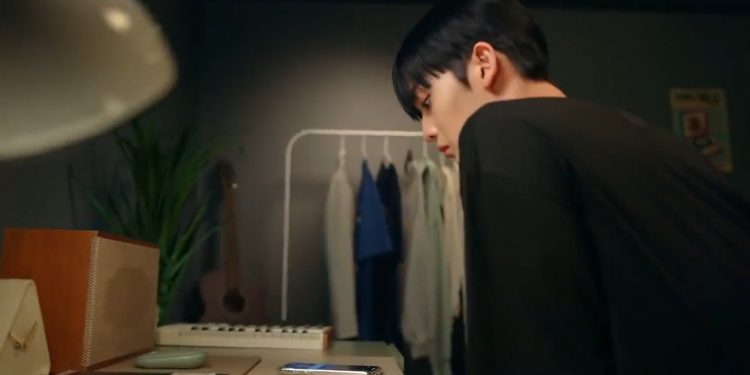 Episode 13 of User Not Found will delve into what many fans have long been curious about: Who is the owner of the YouTube channel which uploads the playlists Minjae listens to? The series so far has shown us that someone makes playlists which Hyejun, Yijoon, and Minjae like listening to. These playlists touch Minjae’s hearts, and she often leaves comments on them. Many fans speculated that Yijoon was the one behind them, and we finally got our answer towards the ending of the last episode.

After a tiring day, Minjae leaves a comment on the most recent playlist uploaded by the YouTube channel. As soon as she does that, Yijoon gets a notification for a comment left by a user. As both the characters have trouble expressing each other, the fans hope that at least this can become a medium where they can get honest with each other. If Yijoon can pick up the hints Minjae leaves in her comments, will it help him get more true to his feelings and start communicating with her better? All the fans are super curious to find out as well.

Previously on User Not Found: Jiwan makes a confession

Jiwan seeks out Minjae and tries to say something. Minjae can tell she is very hesitant but kindly asks her to proceed. Jiwan immediately starts tearing up and asks her if she likes Shin Yijoon. Even after Minjae replies with a no, she keeps on asking in disbelief. Jiwan finally confesses that Yijoon asked her out. Minjae is taken aback for a second but quickly starts assuring Jiwan. She tells her that she truly does not have feelings for Yijoon. Jiwan responds with a shaky smile and informs Minjae that she is going to decline Yijoon. She also adds in a statement that indicates he goes around asking girls out often. This leaves Minjae very confused.

As Minjae falls into a maze of thoughts after her conversation with Jiwan, she can’t decide what to do. She feels it is only right not to go see a movie with Yijoon if he asked another girl out. As she sits on the staircase, talking to herself, Hyejun appears. He questions Minjae’s troubled appearance, and she tells him that she is merely wondering what advice to give her younger sister. She relays the entire exchange between her, Jiwan, and Yijoon but doesn’t mention names. Hyejun is quick to catch on, though, and asks her if she likes Yijoon. Stunned, Minjae waves him off with a no. Hyejun tells her that choosing friendship over love may be wise at times as one wrong choice can cost you both.

Minjae sets up a date for Jiwan

Minjae finds a thorn still pricking her side. She gives it plenty of thought and eventually offers Jiwan her movie ticket. Jiwan gushes at her kindness but declines at first, saying she doesn’t want problems to arise between both of them. Minjae assures her and tells her that it is okay, adding that she is sure Yijoon would enjoy the movie better with Jiwan.

A surprising encounter takes place at the theatres

As Yijoon sits waiting for his date, he is surprised when Jiwan appears in front of him instead. He receives a second dose of shock when he sees Minjae stroll in to watch a movie with Hyejun. As Hyejun throws an arm around Minjae’s shoulders and tells her that he will get a couple of sets, all Yijoon can do is watch with careful eyes. He thinks back to something that happened in the past and wonders to himself, ‘Why are you doing this again?’ as he looks at Hyejun.

What to Expect From The Upcoming Episode?

The upcoming episode will show us what changes between Yijoon and Minjae. As more friction develops between the cousins Hyejun and Yijoon, what memory of the past will finally cause an explosion? Will Yijoon find the courage, to be honest about his feelings with Minjae? Stay tuned to find out.

Episode 13 of User Not Found will be released on January 14, 2022. The fans cannot help but be frustrated at the lack of communication between Yijoon and Minjae. Will things change in the coming episodes?

Where to Watch User Not Found Episode 13?

User Not Found Episode 13 can be viewed on Viki. As everyone knows who the owner of the YouTube channel is, they are hoping Minjae finds out soon as well. Will the unpopular Minjae’s secret come out soon, or will she be able to conceal her identity well? Make sure you don’t miss the episode next week to find out.