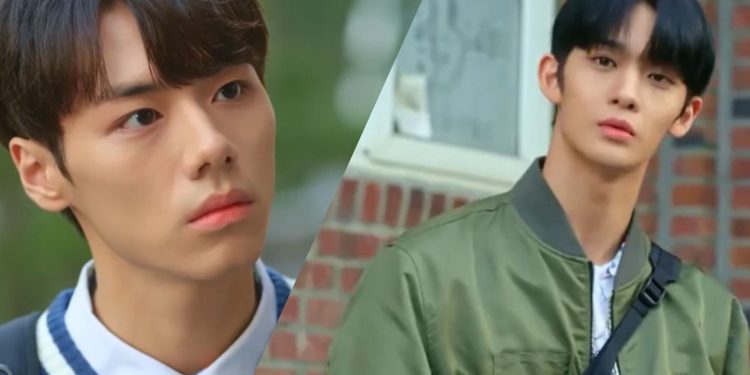 User Not found episode 12 might just give us the explosion fuelled by the fire that has been intensifying between Bae Jinyoung and Ahn Semin. The characters they both portray have been in a subtle cold war lately. Hyejun has carefully manipulated his way into both the Minjae’s secret. He seems to have some special interest in the unpopular Minjae, but many speculate it is just him feeding his ego or trying to irritate Yijoon. On the other hand, Yijoon seems to have developed genuine feelings for Minjae.

Every time anyone brought her up in relation to him before, he would get annoyed and say he had no interest in her. However, he seems to have gotten quite close to her in the previous episodes. Yijoon cannot help but likes Minjae’s warm and innocent personality. But what will happen when his cousin makes up his mind to destroy his peace of mind? Both the boys seem to have some unresolved feelings still lying between them due to an incident in the past. Will we finally be getting to know what exactly transpired soon? The fans cannot seem to wait till the weekend to find out.

Hyejun and Yijoon grow further apart emotionally as they begin to hide things from each other.

As Minjae begins to receive affection from all of her classmates, Jiwan cannot help but become overly jealous of her. She tries to do multiple things that might ruin Minjae’s reputation or lower her popularity. Jiwan is clever enough never to attack her directly, though. She always plans things out in a manner that leaves her looking like the victim. In her latest attempt to ridicule Minjae, she pokes fun of the T-shirt Minjae changes into after P.E class.

Just as it seems like others from her clique might jump in and join Jiwan in her actions, a classmate comes forward and compliments Minjae’s shirt. They get into an animated conversation about the reference on the shirt. Hyejun joins her and says the shirt is actually quite pricey and really cool. This interaction earns Minjae compliments from her classroom for mixing well with all sorts of people.

As Yijoon is contemplating whether or not to text Minjae, Hyejun takes a seat beside him and asks him what he was up to. Being shy natured as he is, Yijoon brushes off the question and doesn’t give a proper answer. Hyejun thinks to himself that since his cousin is keeping secrets, he is making up a fun one to guard himself. This evident existent tension between the both seems to be getting denser as the episodes pass.

Minjae receives a mixtape from Yijoon. To give him something back, she decides on a movie ticket. As she is handing it to him, Yijoon seems hesitant and says, ‘Just one?’. Minjae gets flustered and quickly tells him she will get him another to go with someone. She is immediately cut off by Yijoon, who asks her to go with him. Minjae is shocked but secretly is extremely happy. She spends a lot of time deciding what to wear and even takes the other Minjae’s opinion on her outfit and styling.

Jiwan approaches Minjae to ask her to go shopping with her. When Minjae tells her she’s busy as she promised to go see a movie with Yijoon, Jiwan is quick to encourage Minjae’s feelings. She tells her that Yijoon definitely does seem to like her. When Minjae points out that Jiwan herself had said that Yijoon goes to movies with friends when he’s bored, she brushes it off and says that since it’s just the both of them, he must have feelings for her.

User Not Found Episode 12 will be released on January 8, 2022. Many fans are excited to see what Hyejun will do in the future. Will he keep causing trouble for the girls in order to pretend to be the savior each time? Stay tuned to find out.

Where to Watch ‘User Not Found’ Episode 12?

User Not Found can be streamed on Viki. All the fans are loving the interactions between both the Minjae’s and are hoping for more of those in the coming episodes also. Hyejun and Yijoon might just need to have a proper talk to sort out the emotions that are causing evident conflict between them, and the viewers are very curious to see how that will work out.

From the next episodes, we can definitely expect a good amount of jealousy from Yijoon. The previews gave us a quick glimpse at Hyejun trying to get closer to Minjae and Yijoon getting very bothered by it. What will Yijoon do next? Will he clearly confess to Minjae? We’re all dying to find out.