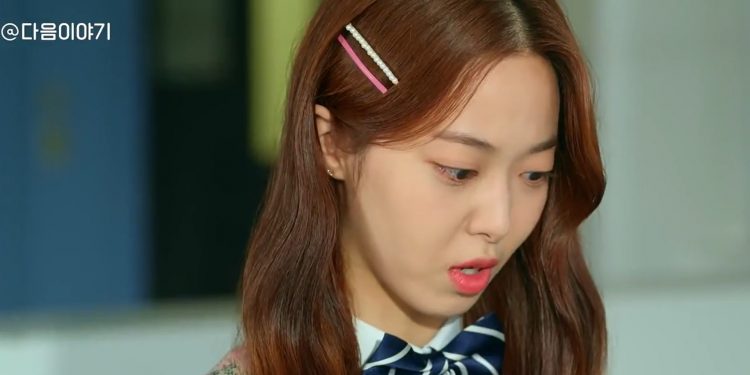 Jiwan will be making strong attempts to get in Minjae’s way in Episode 11 of ‘User Not Found’. Over the episodes aired so far, it has been established that Jiwan is not all transparent about emotions and kindness when it comes to Minjae. She acts like she’s chummy with her upfront but is always looking for ways to subtly tear her down while still seeming innocent. Jiwan seems to wish to achieve a flawless reputation at school and the title of Ms. Popular. It was all going in her favor till Minjae came around.

Jiwan seems to have underestimated how well-loved Minjae would be by everyone. She carefully planned out actions and words that will soon be causing a rift between Minjae and Yijoon if they do not sense her true intentions. While Hyejun seems to be invested in what both the Minjae’s do, he’s also slowly becoming aware of the soft spot Yijoon seems to have for one of them. He promised both the girls that he could manipulate any situation in the class in his favor, but how far will Hyejun’s tactics really go in protecting them?

As Han Yeji whisks Shin Sohyun away for a cute date, their bond deepens significantly. Yeji takes Sohyun to buy clothes, and they get matching T-shirts. As they converse, Sohyun confesses that she got made fun of her for the way she dressed in Middle School. As they sit down in a cafe to eat dessert, she adds to her confession and tells Yeji that she has never been to a cafe before with friends. Their conversations on the date open up a soft spot for Sohyun in Yeji’s heart.

The previous episodes have revealed important information about Hyejun. All the fans suspected that something was off about Hyejun since his behavior was fishy from the start. His actions in the previous episode proved that all the suspecting viewers were right. He did not just want to help, but he was the one who created the whole situation that would have the girls requiring help himself. A scene shows him uploading the post about Minjae on the anonymous page, and upon telling the girls, he can help to delete it. His intentions so far are not very clear, but it is evident that he is not genuine in his displays of emotion.

Minjae gets comfortable with Yijoon

As the series progresses, Minjae slowly gets more comfortable with Yijoon. She comes across him getting scolded for not abiding by the school dress code. As they both delve into a conversation walking side by side, she tells him it is true that he doesn’t dress in the proper uniform. As Minjae starts pointing out all the ‘minus points’ in his outfits, she playfully points at his face and says, ‘Minus point’. Yijoon’s face shows the slightest hint of a smile as he questions, ‘Minus point?’ while pointing to his face, making Minjae blush and divert the conversation. The fans adored this scene and depicted how both the leads are slowly getting comfortable enough to joke around with each other.

When Yeji suspects that Sohyun might get heat for her fashion by Jiwan and her clique, she pulls Hyejun aside prior to anything happening and asks him for a favor. She asks him to jump to take Sohyun’s side if any such situation arises. Hyejun resists at first but agrees in the end. He questions why she wants to go so far to help Shin Sohyun, to which Han Yeji says that she feels like she wants to protect the girl.

Episode 11 of User Not Found will be released on January 7, 2022. Jiwan observes Minjae getting closer to Yijoon. She acts like she is indifferent or even supports the two, but her true feelings are still unknown. What will she do to split the two up?

Where to Watch ‘User Not Found’ Episode 11?

User Not Found episode 11 can be viewed on Viki. The next episode will create the halfway mark in the drama. Many fans are excited to see what unfolds between all the main leads. Make sure you don’t miss out next week!

The upcoming episodes of User Not Found will show us to what extent Jiwan will go to create misunderstandings between Minjae and Yijoon. In the preview, we can see that she tells Minjae that Yijoon confessed to her. Many fans are sure that she is lying because Yijoon clearly seems to have feelings for Minjae.