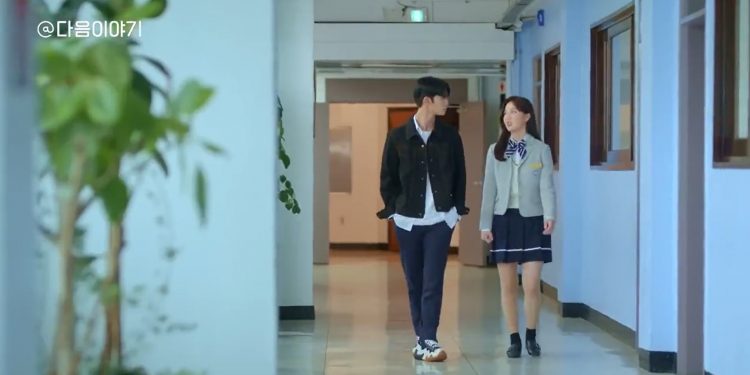 What will episode 10 of User Not Found have in store for us? Plenty of Minjae and Yijoon moments, that’s for sure! As the series progresses, we are able to see the two of them shedding the preconceived notions they had about each other. With more interactions, the pair seem to realize that they like the others company more than expected. A lot of fans are happy about the scenes they share on screen because they are a very cute couple.

Not only is the atmosphere between them getting sweeter, but there seems to be the start of something with the other Minjae as well. After colluding with Hyejun, she realizes that both of them aren’t very different. Hyejun seems cynical and Minjae a bit cold; when they both stand together, they make quite an eye-catching pair. Apart from what Minjae and Yijoon will bring to the screen, we are also eagerly looking forward to the developments in Hyejun and Minjae’s relationship. He is very tactful at dealing with Jiwan, and while presiding over the class president’s spot, he might be the one adding all the spice to the drama in the upcoming episodes.

Previously on User Not Found

From Jiwan’s consistent efforts to subtly bring Minjae down to Hyejun’s clever tricks to combat that, there’s a lot that unfolded lately.

Minjae and Yijoon had an ultra-cute encounter on the street. As Minjae goes out to the supermarket to get something in her sweats, she bumps into Yijoon. As they spot each other from a distance, they shyly turn away and hide till the other passes. When both realize that they have the same thoughts, they slowly greet each other and get talking. This is a turning point in their relationship as both of them clear out misunderstandings they had regarding the other.

Hyejun has tricks up his sleeve

After both the Minjae spill everything out to Hyejun, he tells them he can be of help. Being the class president and having the image of a cheerful and friendly guy works in his favor almost always. He lets them know that if he wants, he can turn the class in favor of Minjae instead of Jiwan. To start, he approaches one of the girls in Jiwan’s clique and compliments her personality. Having done so, he adds that Minjae complimented her in front of him and said that she found her to be the easiest to talk to. This makes her start viewing Minjae in an extremely positive light.

Jiwan uploads a passive-aggressive story on her Instagram regarding the situation at school about Minjae’s shoes. In it, she complains about how she always ends up apologizing for things that aren’t even her fault. Jiwan is referring to a scene from earlier in school that day where she publicly apologizes to Minjae and makes a scene. This causes everyone to think Minjae scares her friends. Shin Sohyun is merely upset about the story, whereas Han Yeji cannot sit till. She reposts the story with a witty response that has Jiwan extremely furious.

Minjae and Hyejun are more similar than they thought

The bonus clip towards the end of the eight-episode shows us Hyejun and Minjae discussing the story issue and what he said to Jiwan’s friends. They both seem to have a lot more in common than everybody thought. When Minjae asks Hyejun why he’s doing this and should he not be helping his friends, instead he replies with, ‘What are you talking about? You don’t believe in friendship either.’ Both of them have a lot of chemistry, and the fans cannot wait to see their relationship being explored.

User Not Found Episode 10 will be released on Saturday, January 2022. It will show us how Jiwan will retaliate to Minjae’s actions. Are you excited to know how things will unfold? So are we!

Where to Watch ‘User Not Found’ Episode 10?

User Not Found is available for streaming on Viki. The behind the scenes for the series are uploaded on the production company’s channel on YouTube. Check it out for some fun cuts.

What to Expect in The Upcoming Episodes?

The next episodes will deal with Hyejun and Minjae’s methods of dealing with Jiwan. How far will Jiwan go to bring Minjae down? Will Yijoon succeed in expressing his emotions to Minjae? Tune in to find out.

What is Freddy Dodge’s Net Worth? Career & Earnings