Slice of Life is a beautiful, bittersweet and wholesome genre. Let's find out about some upcoming ones!! 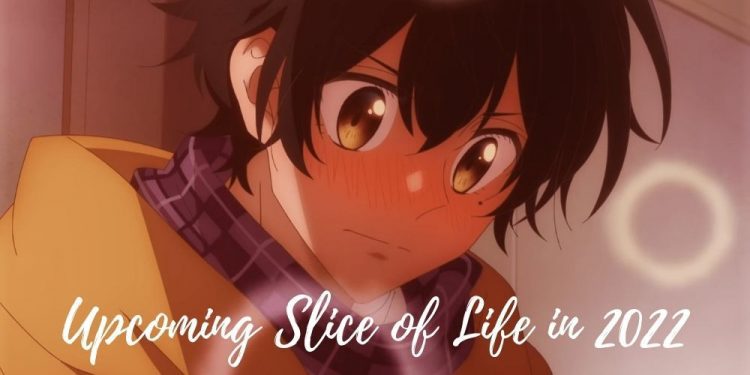 Upcoming Slice of Life in 2022

Have you ever wondered that why we like ‘Slice of Life‘ despite the fact that it’s so realistic and sometimes even painful to watch? This is because a slice of life is a wholesome anime with sweet, bitter, sour, and fun moments of life. In a realistic setting, if someone achieves their goal or finds the love of their life, it motivates the viewers to look forward to the future because, despite all the struggles, there’s still hope. We often end up relating the characters to ourselves, maybe a nerdy character with a secret fandom life, or a quiet guy who hides piercings and tattoos, or maybe just a bubbly character who has their own struggles. So, herein, we shall look at some slice of life anime to come out in 2022.

This genre allows us to relish those small yet loving moments of life, reminding us that the memories of our life journey are more precious than achieving the goal which we perceive as ‘success’. Even a little hobby can become someone’s career, so we learn how to not take things for granted. Slice of Life is a beautiful genre, and now let’s see what are some of the best upcoming Slice of Life anime in 2022!!

Kawai is a female police officer who didn’t even work in a field with brutality. She was just about to put in her resignation when in came a beautiful new director of the station!! Kawai starts to idolize her and realizes how much this career can give her. This totally changes her life as she explores her real self! It is based on a manga released by Kodansha Comics in the US.

Also Read: Solo Leveling Anime Adaptation: What is all the Twitter hustle about?

Hiyori is a kid whose father made her fall in love with the joy of fishing. After his death, she headed out to the sea and was surprised to see another girl at that place. This girl was named Koharu, and they started to get along well! They fish together and even start eating together. Both of them keep talking, and there’s a big twist!! Hiyori doesn’t want to go home because she doesn’t want to meet her new family, and Koharu says that she’s hesitant to meet hers too. Let’s follow these two new sisters, new life together with the adventures of fishing!

Takagi is a mischievous middle school girl who loves to tease the girl who sits near her. This boy is Nishikata, and they get into squabbles. That’s when they make a pact that whoever blushes loses. Henceforth, Nishikata tried to make Takagi red with embarrassment. But he kept failing, and they kept on trying to outwit each other. The rivals kept on fighting, but slowly, bit by bit, they grew closer to each other. Nishikata was successful in making her blush. What will happen in Season 3? We’ll see soon!

Also Read: The Heroic Legend of Arslan – Anime Adaptation: Everything to Know

Wakana Gojou has been traumatized by an incident that happened in his childhood. He is a fifteen-year-old who had social anxiety due to his passion in the past. He slowly becomes a loner, finding solace in the home ec room in his high school. To him, beautiful people like Marin Kitagawa, who’s a trendy girl surrounded by tons of friends, are practically like an alien who lives in a different world. The anime is based upon the manga. It is Seinen, aka focused on the Young Adult Male, Wakana Gojou. Romance, Slice of Life, and Coming of age are some of the tropes that have been focused on in the anime.

Akebi stays in the countryside of the city. She received the entrance to prestigious Roubai Academy middle school, which was for girls, and now Akebi wanted only two things in life—to wear the school’s sailor uniform and have lots of friends!

Also Read: Will There Be an Apotheosis Anime Adaptation?

This sweet Slice of Life features the life of Miyano, who loves reading Boys’ Love manga, which are comics about gay romances usually famous among readers who call themselves fujoshi and fudanshi. Miyano was often worried about his looks, like any adolescent. He thought it might look girlish, whereas he was quite feisty, which was quite the opposite to his looks, just like Inosuke from Demon Slayer. Soon, Miyano found himself in a scuffle with a senior called Sasaki. Beautiful enemies to lovers trope with a shounen-ai genre of anime with a slice of life and blooming romance.

Also Read: Is The World’s Finest Assassin Gets Reincarnated in a Different World as an Aristocrat an Harem Anime?

Based on a light novel, the story is about Myne, who realizes that the Holy Church was in need of mana to protect their relics. She saw this as a chance to be cured of her mana disorder which could even take her life. She begged to join the order and provided them with an infinite amount of mana. For her amazing contributions, she was offered the blue robes worn by nobles, despite being a commoner. She wanted to become a librarian, and this is her journey!

3. The Demon Girl Next Door

Yuuko Yoshida saw that she had turned grown demonic horns and a tail. Her mom told her that their family was descended from a Dark Clan. They were banished and cursed to live powerlessly. The only way to resolve the ancestry’s curse is to let Yuuko find a magical girl and let her blood splatter on the statue of Demon God. A fun adventure with a twist a tragi-comical journey, this anime is not to be missed!

Shikomori is the perfect girlfriend. She is sweet, caring, fun-loving, kind, and humble. But who would know that she actually has a really cool yet dark side, which her boyfriend would suddenly find out about? But soon, Izumi, her boyfriend, falls in love with this side of her as well! It is based on an ongoing manga written by Maki Keigo. This romantic slice of life will definitely be your heart!

Ayumu Tanaka quit the Kendo Club out of nowhere to join the school’s Shogi Club, which was illegitimate. Urushi Yaotome, the president of the Shogi Club, becomes thrilled to finally have a person to play with. Urushi is older than Tanaka and wants to be his mentor. Ayumu often called her cute with a straight face, hearing which Urushi would be red with embarrassment. Ayumu gets a crush on her but thinks that he would only confess once he defeats her in a match. A cute high school romance with puppy love and humorous moments will be a cute ride for the summer heat! Would Ayumu ever confess to Urushi? We’ll find out soon!

These were some of the upcoming Slice of Life of 2022, especially featuring animes that will be released in Winter 2022, Spring 2022 as well as Summer 2022. Some amazing movies and OVAs of Slice of Life, like Sasaki to Miyano: Koi ni Kizuku Mae no Chottoshita Hanashi, are also going to release in July 2022. Stay tuned for more anime info!

What is Stars and Stripe’s Quirk? Quirk explained in BNHA