The South Korean boy band has recently appeared in Vanity Fair where they talked about their daily routine and so many other fun topics. 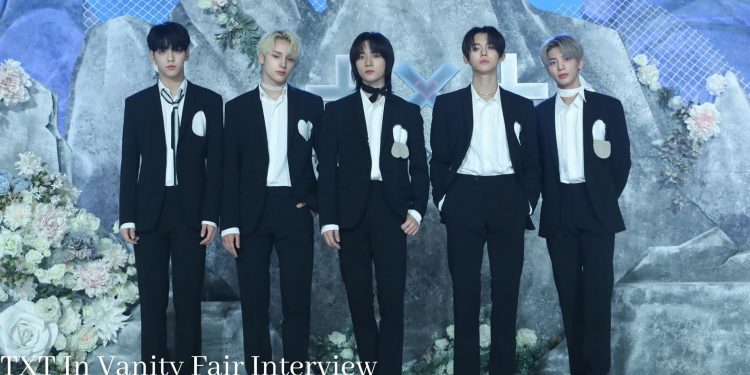 The internet is loud again with the updates about TXT Vanity fair interview. The South Korean boy band has recently appeared in Vanity Fair, where they talked about their daily routine and so many other fun topics. There’s much to know from it, and fans out there are loving the content and their all-time favorite idol group. The interview was a fun time for both the audience and the boys, and we can say that it was a fun time together.

It is for sure that our daily routine gets a bit off and tough at times. Life becomes a bit messy when things get overwhelming, and we need some motivation to keep up with the flow. Living would have been ten percent easier if we had something exciting and amazing to look forward to every day. And TXT has talked about the same in this interview with Vanity Fair.

So, let’s have a quick peek inside and take a detailed look at everything the boys have shared with us.

In their recent interview with Vanity Fair, the boys talked about their daily routine, and when they were asked about their anticipation, which they look forward to every day, they didn’t take more than a few seconds to answer.

Of course, the first to speak up was our fluffball Taehyun, and he said that he couldn’t wait to see what he was going to eat every day! Well, isn’t that interesting and really intriguing?

He said, “What is something we look forward to every day? The first thing I looked forward to is…what to eat.”

The top persona: Food Is Life!

After he spoke up the answer, all other members followed his tale and perked up with their answer agreeing with him unanimously. The answer was straight up that they are in neck-deep love with FOOD.

Like every other die-hard food lover out there, Hueningkai also agreed saying, “Food comes first.”

Taehyun also revealed out that after all their routine, his first question to himself is, “What are we going to eat?”

Tomorrow X Together (TXT) is a globally recognized South Korean boy band stamping its name in the global music industry. Operating under Big Hit Music, the group comprises five members, Soobin, Yeonjun, Beomgyu, Taehyun, and HueningKai. They were revealed in 2019, and since then, their music has been up on the charts.

Their debut album “The Dream Chapter: Star” bagged the first position on the Gaon Album Chart and Billboard World Albums Chart and also entered the US Billboard 200 ranking at 140th position. Thus, becoming the highest-charted debut album by any male K-pop group. Their beginning was a bang, and so is their journey since then.

The group has raised the standards and has bagged several big nominations and awards at various music awards, including Rookie of the Year at the 34th Gold Disc Awards and also at the Melon Music Awards (2019). They bagged the New Artist of the Year – Album at the 9th Gaon Chart Music Awards, and at the 2019 Mnet Asian Music Awards, they won the Best New Male Artist.

Their discographies are charting high on every chart, both domestic; and global, and we are soon going to see them charting at the top and ruling over the global music industry.

ALSO READ: Top Music Genres Covered By BTS You Should Listen To!